Review: Meant to Be Mine (Guilty Pleasures #1) by Lisa Marie Perry 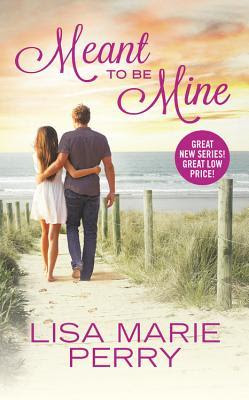 "Just as your dangerous career can take you away from me at any time. It's a risk and I want to try. Because it's you, Burke. Because, damn it, you've always meant something to me." - Sofia Mercer

Sofia Mercer may have been sick as a teen, but she's no delicate flower. And she's proven it by making it on her own and starting a new life away from the town that turned against her, away from the boy who broke her already fragile heart. But when her aunt Luz dies unexpectedly, leaving Sofia with a mountain of regrets and the keys to a quirky boutique, Sofia has no choice but to return to Cape Cod. Only, this new life in her old town comes with complications.

Burke Wolf was Sofia's first love-a relationship that burned bright and went up in flames. Seeing him again, Sofia can't help but get caught up in that all-too-familiar tornado of passion and pain. He's battled his own demons-that much is clear. But Sofia can't afford to be careless with her heart . . . and loving Burke again might just break it completely.

I've been wanting to pick up one of Lisa Marie Perry's books for about a year now, but the timing always seemed to be off and I could never fit her new release into my schedule. This time... I made it fit! When Meant to Be Mine was offered to me, I jumped at the chance to finally pick up my first Perry romance. I have to say that, while I didn't love Meant to Be Mine, I did enjoy it. I felt that it got caught up in what I like to call "1st book in a series blues," where the author has to not only introduce the two main characters, but also has to give page time to some of the secondary characters that'll be featured in the next book(s). So while we meet Sofia and Burke, we also get to know Joss and Caro, who are the heroines in book 2 and 3. There are also multiple POV's and at times it felt like there were too many cooks in the kitchen when I really wanted more from Sofia and Burke.

With all that said, let's focus on what I did like about Meant to Be Mine. I love the theme that connects the series together. This is quite the adventurous small town with a naughty boutique and other coming attractions. I loved that! I had could just picture the 4 girls spending time in the boutique, whether they're arranging the shelves or stocking their own collections. Their friendship is going to be fun to follow as the series moves along. As for Burke and Sofia, I really liked their rocky relationship. While it was raw and volatile at times, they found each other when it mattered the most. It's going to be a battle, but I can see them pulling through. Even with their limitations, they are still incredibly strong individuals. And together? There's nothing that'll stop them.

While I do think it was a little too busy, I did still enjoy Meant to Be Mine. I look forward to see how the series progresses, especially with Joss. She's going to be a fun one to watch.

Lisa Marie Perry encounters difficult fictional men and women on a daily basis. She writes sizzling, deep fiction featuring flawed heroes brought to their knees by the love of complicated women. She has received high praise from USA Today and has been nominated for an RT Book Reviews literary award. She lives in America's heartland, drives a truck, enjoys indie rock, collects Medieval literature, watches too many comedies, has a not-so-secret love for lace and adores rugged men with a little bit of nerd.
Posted by CrystalBee at 8:26 PM