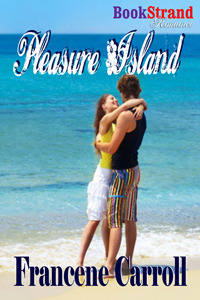 Titled: Pleasure Island
Author: Francene Carroll
Published: 2012
**I recieved a copy of Pleasure Island for a honest review.**
A Brief Synopsis from Goodreads:
When Jackson Moore and Allie Read are paired up for reality show Pleasure Island, the challenge is simply to outlast their opponent. Both believe they will win with ease. What they do not realize is that they are about to face the greatest challenge of all—falling in love.

Jackson Moore is a typical Hollywood bad boy, and millions of women would love to be stranded on a desert island with him. Not every woman finds him irresistible, though.

Allie Read is an uptight documentary filmmaker with no tolerance for men like Jack. It does not take long for the sparks to fly between this mismatched pair, and no one is more surprised than Allie when she becomes attracted to him.

As their physical attraction heats up, Jack and Allie struggle to control themselves in front of the cameras, while at the same time dealing with their growing feelings for each other.

My Thoughts:
Pleasure Island is the story 2 strangers, Jackson and Allie, picked to live on a stranded island...

Sorry, I got carried away.

At first glance, they are polar opposites. While Jack seems like a wash-out actor, it is revealed that he is very naive about the real world (no pun intended). He thinks everything will be easy peasy on the island and is already cashing the 5 million dollar check. Allie, a control freak, has a more jaded outlook on life. While on the island, both characters get the chance look within themselves and find ways to change.

I adore romances where it is just the couple's natural attraction pushing them together. Yes, production was probably rooting for sexual tenion between Jack and Allie, but there were no outside influences. They went from total strangers that hated each other to aquaintences that put up each other to friends who relied on each other. When they finally became lovers, it was a slow and natural progression. I loved this aspect of the book.

Overall, I really liked Pleasure Island. I must admit that one of my guilty pleasures in life are some of the reality TV shows and that is what originally attracted me to this book. It is Survivor meets the Real World (early seasons, not the crap they do now) meets Big Brother. It almost felt like it was a reality show that could be on TV now. I found myself rooting for characters and hating production. Isn't that how it usually is with a reality show? :)
Posted by CrystalBee at 10:51 PM