Review: Always Her Love (The Steeles at Silver Island) by Melissa Foster 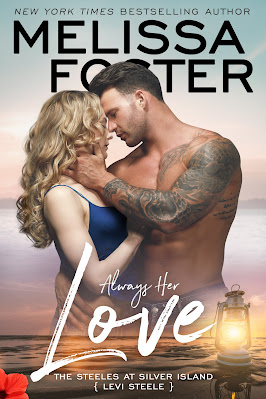 Always Her Love
Author: Melissa Foster
Series: The Steeles at Silver Island
Publisher: World Literary Press
Published: September 21, 2022
Source: ARC for review
Some fates are too tempting to deny…
If you love single-parent romances, you won’t want to miss Always Her Love, an emotionally gripping, funny, and sinfully-hot story of forbidden love, with a much deserved and epic happily ever after. Fall in love on the sandy shores of Silver Island, home to coffee shops, boat races, midnight rendezvous, and the sexy, sharp-witted Steeles. They have a penchant for pranks, a passion for loyalty, and a trunk full of secrets. All Steele novels may be enjoyed as standalone romances.
In ALWAYS HER LOVE
“I'm pregnant. It’s yours. I’m having it, and unless you want it, I’m putting it up for adoption.” Those were the words that changed Levi Steele’s life before he was even legally allowed to drink. There was never any question about whether he would keep his daughter, and eight years later, he doesn’t have a single regret. He owns a successful contracting company, he’s part of the Dark Knights motorcycle club, and Joey’s happiness is his top priority. None of that would be possible without the help of Joey’s beautiful and selfless aunt Tara, who’s going to be staying with them over spring break and who he’s been thinking about in ways he shouldn’t. But Tara’s older sister is Joey’s birth mother, and she’s the last woman the dirty-talking biker should want to get his hands on.
Tara Osten has been crushing on Levi for as long as she can remember. He’s a loving father, a loyal friend, someone with whom she can always be herself, and six-plus feet of deliciously hard, tattooed muscle. At twenty-four, she’s finally realized he will never see her as more than his baby mama’s younger sister. It’s time to let go of her lustful fantasies starring Levi Steele and move on with her life. Step one: Buy her own place and start dating. Step two: Survive spring break without falling harder for the one man she can never have.
Read more »
Posted by CrystalBee at 9:10 PM No comments:

Review: The Trouble with Whiskey (The Whiskeys: Dark Knights at Redemption Ranch #1) by Melissa Foster 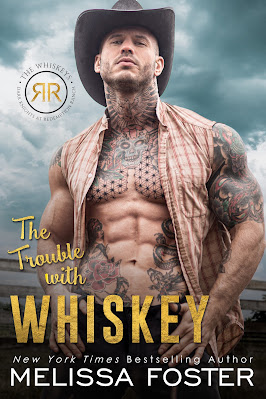 The Trouble with Whiskey
Author: Melissa Foster
Series: The Whiskeys: Dark Knights at Redemption Ranch #1
Publisher: World Literary Press
Published: July 20, 2022
Source: ARC for review
She’s the only woman he’s ever loved, and the one he could never have…
Years after losing one of their best friends to a dare gone wrong, Devlin “Dare” Whiskey continues to live up to his name, endlessly testing fate, while Billie Mancini buried the best parts of herself. Billie is beautiful and tough, and battling demons Dare has no idea exist. But Dare is done watching her pretend to be something she’s not and takes on his most important challenge yet—showing the woman he loves that some dares are worth the risk.
Read more »
Posted by CrystalBee at 6:00 AM 1 comment:

Trapped by Doubt by Jayce Carter

Book 2 in the Dark Sanctuary series 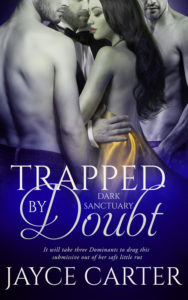 It will take three Dominants to drag this submissive out of her safe little rut.

Clint, Ethan and Fox have gone to Sanctuary for years, but after a bad experience with a submissive, they’re gun-shy about taking on anyone else. However, when they see Ell there, they can’t resist the pull to the sweet, stubborn woman.

When Ell is attacked in her home, the men help her move into an apartment in the same complex as them, which lets them explore each other—and their own wants—that much more. But there’s Ell’s trouble with trust, the men’s doubts about her commitment and mounting suspicions about the attack on her to deal with.

The quartet will have to learn how to let go of their pasts and trust one another to have any hope of finding happiness—and staying alive.

Reader advisory: This book contains scenes of violence and abduction, and mentions of child abuse.

Read more »
Posted by CrystalBee at 9:31 PM No comments:

The Billionaire's Appetite by L.A. Day 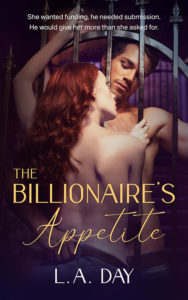 She wanted funding—he needed submission. He would give her more than she asked for.

Charity’s father pulled the funding for her research, but she may have found the perfect replacement. Silas is a billionaire and he agrees to meet to discuss her proposal. After an embarrassing first encounter with the gorgeous but elusive billionaire, she didn’t expect him to help her.

Silas Radford is intrigued by the beautiful and brainy scientist. She asks for funding, but he wants a partnership—and not just in business. Sparks fly between them the moment they meet, but there are a few issues to set to rest before he can close the deal.

But Charity doesn’t realize Silas is friends with the father she feels betrayed her. And even if they can get past that, he still has to show her the full extent of his darker appetites…

Read more »
Posted by CrystalBee at 10:50 PM No comments:

Review: In His Hands (Perfect Taboo #3) by Hannah Murray

In His Hands By Hannah Murray

Book 3 in the Perfect Taboo series 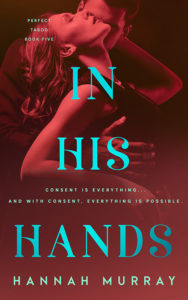 Consent is everything…and with consent, everything is possible.

Olivia has one wish—to find a partner who will do consensual non-consent scenes with her. She thought she’d found the perfect man, but he turned out to be more dud than Dom. When their relationship implodes, she moves out, and moves in with her friend Cade. He’s happy to have her, but living with him won’t be easy. It was easier to ignore her feelings for him, and the fact that he’d always been her ideal Dom, when she’d had a boyfriend. But he’d stopped doing CNC after a scene had gone wrong, so she’d set her sights elsewhere.

Cade has his own problems. He’s been in love with Olivia since they met, but when she started dating someone else, he put his feelings aside and focused on being her friend. But now that she’s single again, he’s not going to let opportunity pass him by. He’s happy to set her straight about his feelings on CNC play—totally still into it, but won’t do casual scenes—and more than eager to make all her kinky dreams come true.

Olivia finally has the kind of kinky relationship she’s always wanted, and her feelings for Cade only grow stronger as time goes on. But when her ex reappears to explain why he ended their relationship, she wonders if she’s mistaking her happiness with their CNC play for love—and worries that Cade might be doing the same…

Publisher's Note: The story told in this book begins on the same day that Sharing His Submissive ends, and before the events of Show Me Something Good.

Read more »
Posted by CrystalBee at 6:00 AM No comments: 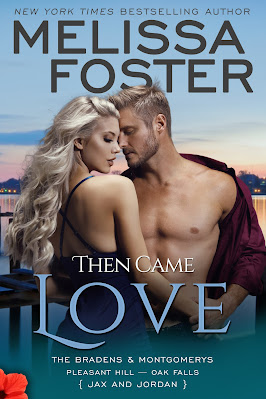 Then Came Love
Author: Melissa Foster
Series: The Bradens & Montgomerys: Pleasant Hill - Oak Falls #9
Publisher: World Literary Press
Published: May 18, 2022
Format/Source: ARC for review
What happens when you find your soul mate but she belongs to someone else?
Months ago, famed wedding-gown designer Jax Braden met the woman of his dreams when a bride-to-be came in for a consultation. He’s tried to move on, but there is no forgetting beautiful, smart, and refreshingly real Jordan Lawler, or the loneliness she cleverly tries to hide. When Jordan hires him to design her wedding gown, Jax knows he’s in trouble, but he cannot walk away. As business meetings turn to late-night confessions, their connection deepens, igniting passion too strong to deny. They’re drawn into an inescapable and forbidden love. Loyalties are tested and hearts are frayed, but neither will cross that invisible line in the sand. Come along for the sexy, emotional ride as Jax and Jordan face their toughest competitors yet—their hearts.
Read more »
Posted by CrystalBee at 6:00 AM 1 comment: 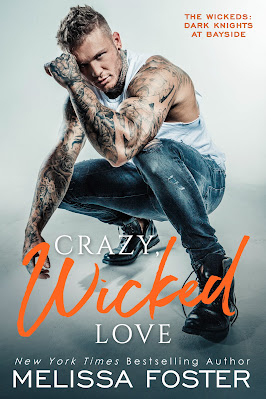 Crazy, Wicked Love
Author: Melissa Foster
Series: The Wickeds: Dark Knights at Bayside #3
Publisher: World Literary Press
Published: March 23, 2022
Source: publisher/author for review
Scorching heat, laugh-out-loud humor, and swoon-worthy moments abound in this sexy new standalone romance by New York Times and Wall Street Journal bestselling author Melissa Foster.
What happens when the player gets played?
Sidney Carver has a big problem, and he goes by the name of Dwayne “Gunner” Wicked: six-plus feet of muscular, motorcycle-riding, animal-loving deliciousness. Gunner is her boss, roommate, and best friend. They’ve seen each other through life-altering injuries and unimaginable losses, and they work side by side at Wicked Animal Rescue, fulfilling their passion to save animals. Unfortunately, Gunner is also the man Sidney is in love with, and he’s the ultimate player. As her former military comrade, Gunner sees her as his buddy—just one of the guys. Sidney is at her wit’s end, ready to risk the friendship and job she adores for a chance at forever love with the man she can’t live without. Like any good marine, she comes up with a mission. Enter Operation Get My Guy.
Gunner loves his life. He has a family he adores, a brotherhood that always has his back, and a host of willing women to warm his bed. As the owner of Wicked Animal Rescue, he saves lives and works with his best friend, Sid, the coolest woman on the planet. When Sid concocts a crazy plan to win his cousin’s heart, Gunner reluctantly agrees to be her wingman.
Practices heat up as roommates become teammates. Let the wicked fun begin…
No cheating. No cliffhangers. Guaranteed to melt panties and leave readers hopelessly in love with the sinfully delicious Wickeds.
Read more »
Posted by CrystalBee at 9:00 AM 1 comment: