A Beautiful Struggle by Lilliana Anderson 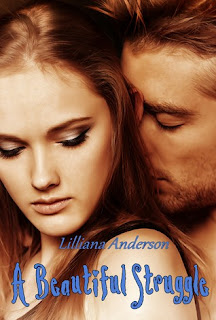 Title: A Beautiful Struggle﻿
Author: Lilliana Anderson
Published: January 1, 2013
Synopsis from Goodreads:
Katrina Mahoney has a very full life attending university to study a law degree, training for triathlons and now she is working part time as well. She couldn’t possibly find time for a relationship, especially after her last one ended so catastrophically.

Right now she is content focusing on work, study and training while hanging out with her best friend David Taylor, a womaniser with a heart of gold that would do anything for Katrina – except watch her get hurt again.

That is, until the dashing Elliot Roberts, a junior solicitor from her work, shows an interest in her despite their office’s ‘No Dating’ policy.

Katrina struggles with following her heart or following her mind and has trouble seeing where her heart truly lies.
My Thoughts:
Before I begin my review, I should say that I recieved a copy of A Beautiful Struggle for a honest review.
Never have I read a book with a more fitting title. Wow... A Beautiful Struggle is a well written novel about a young woman's struggle to falling in love after an abusive relationship. The characters were well written and emotional. Not going to lie, the sex scenes were hot. And everything in between made this a very enjoyable book.

A Beautiful Struggle follows the life of Katrina, a 20 year old law student, as she starts a new job as a library of sorts for a law firm in Australia. She encounters a few people at work that throw curveballs at her. She meets and becomes friends with some women, while two ladies (and I use that term loosly) hate her for almost no reason. Early in the story, we learn that she recently ended a very abusive relationship that left her with many scars, both physical and emotional. A Beautiful Struggle is the story of Katrina learning to love again.

Then we meet David and Elliot. David is her best friend since childhood. He saved her from her ex-boyfriend and has stayed by her side through almost everything. He is just as torn about love as Katrina was and was fumbling through most of the book. But as the story progressed, I could see his inner struggle and I started to root for him. Elliot, a co-worker with Katrina, is her love interest. True, he had a massive TSTL (too stupid to live) moment, but he wasn't a bad guy. He was the guy that made the wrong decision and knew it. Both men loved Katrina and I think she would have been extremely happy with either one of them.

Why does the title fit the book so well? "It was time that I looked on our relationship for what it was - a beautiful struggle; one that we ultimately lost..." - There were so many struggles within one book. Katrina's inner struggle to allow herself to love again. David's struggle to stop Katrina from getting hurt again. And Katrina's and Elliot's struggle to make their relationship to work. It was so real, I felt like I was reading someone's diary.

I must admit that I had a difficult time starting the book, but once I really got into the story, I could not put it down. Each character had a different struggle and I think that made them more real. And the ending threw me for a loop. Did not see that coming. Kudos Ms. Anderson and thank you for taking me on one hell of a roller coaster ride through this book.
You can find the book here:
Amazon
﻿
﻿
Posted by CrystalBee at 9:56 PM