Dangerous Curves Ahead by Sugar Jamison 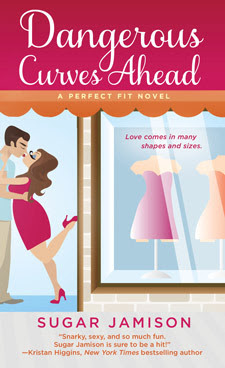 Ellis Garrett is dumping her critical boyfriend, opening a plus-size clothing store, and starting a blog—all to spread the word that fashion shouldn’t require a size-two body, and happiness should allow for the occasional cupcake. Or two. But is indulging fantasies about her sister’s long-ago ex, the still-hunky Michael Edwards, biting off more than she can chew?

Mike must be losing his detective’s touch. He doesn’t recognize Ellis when he bumps into her at Size Me Up, and he certainly doesn’t remember his ex-girlfriend’s outspoken sister being so irresistible. Her curves are indeed dangerous—and so is her wit. Could it be that Ellis is his Perfect Fit? One thing’s for sure: Mike will make it his sworn duty to find out…

After a friend of mine read Dangerous Curves Ahead and gushed about how much she enjoyed it, I had to read it. I sat with it on my Kindle for a day or two because I knew it would be the kind of book I can't put down until I finish it. And I was right. I started it on September 4th and finished it the following evening. I would have finished it sooner, but a girl needs her beauty sleep or I'd be a zombie the next day. Instead of "Braaaaaains," I'd be walking around saying "Boooooooks."

This is what happens when I try to blog while eating birthday cake. Good things never come from sugar rushes!

I freaking loved this book. Its not the typical love story where everything is sunshine and daisies. For the most part, all of the characters in the book are deeply wounded. I know some people won't like these types of characters, but I have always thought it made them more realistic. I adored Ellis and Mike as a couple. They have a history with each other, but Mike can't remember how. While this torments him to no end, Ellis is enjoying teasing him. She was a little immature in the beginning, but I chalked that up to her playful nature. Their relation was a flipping rollercoaster. They were on again/off again for most of the book, but I liked that it wasn't just one character's fault. Both of them made stupid decision that affected their relationships and both of them had to grow up and face their demons before finding one iota of happiness. I appreciated the fact that they had to work on their relationship or it was doomed. It wasn't handed to them on a silver platter. When they were on, Ellis and Mike were so playful together and he was super protective of her. When they were off, I turned the page and hoped that they would come to their senses. Talk about an emotional rollercoaster! Its a good thing I'm a coaster junkie...

Dangerous Curves Ahead is the beginning of a new series and I'm intrigued by the next couple. They make a couple appearances together in this one so it'll be interesting to see how they progress in their own book.
Posted by CrystalBee at 3:00 AM