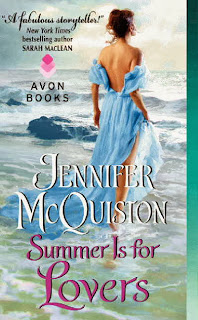 "I am the girl that people laugh about behind cupped hands. An almost-spinster, spilling out the secrets of her heart to a handsome, eligible gentleman. You do not think of me in a way that might be considered romantic. The problem is solved" - Caroline Tolbertson

David Cameron has been tricked. After bringing his supposedly ailing mother to Brighton to take the waters, he’s found himself bombarded with young ladies of marriageable age, while his mother has made a marked improvement. Seeking respite from the hordes, he retreats to a beach he hasn’t seen in years--and finds a woman he’s never quite been able to forget.

Caroline Tolbertson just wants to be left alone. But her mother is determined to see her married off, no matter Caroline’s protests--or her embarassing lack of suitors. Seeing David Cameron, her childhood crush, again sets her heart racing, but she’s older and wiser now. And no, that wasn’t her heart sinking when David suggested a faux courtship instead of the real thing. But Caroline has never been very good at following the rules, and the fake attraction soon grows into the real thing.

Now Caroline has more scandalous pursuits in mind and David is finding it very hard to say no to his gorgeous friend. Will giving in to temptation send them both down a path they each claim to abhor--straight to the altar?

Quite honestly, I don't know where to start with this one. I know I say this often, but I adored and loved Summer is for Lovers from the first page until the very end of the epilogue. There wasn't a moment I didn't enjoy and there wasn't a conversation between David and Caroline that I didn't want to re-read. So, I think I'm going to go through the book step by step. We'll start with the characters and work our way through the plot. Are you ready? Popcorn? Check! Mouse hovering over Amazon's one-click? Oh...I know its there. Let's go visit Brighton!

The characters are possibly the best part of Summer is for Lovers. The book is filled to the brim of loveable characters. There were points in the book where I wanted to shake some sense into David, but his inner-turmoil was hilarious. There is one scene at a dance and he's not happy that Caroline is dancing with another man. My favorite scene of his came from a little night swim he shared with Caroline. Oh, that scene... It would make Colin Firth's Mr. Darcy proud. Yum! As much I was would love to sit here and dream about the lake scene again, we must move on to Caroline. She's such a strong woman, both emotionally and especially physically. She's 23 and starts off the book with no prospects of marriage. Knowing that her mother is struggling to provide for herself and her sister, she knows that she must marry. I love that she bumbles along the way. She held her head up high while others pointed and laughed at her. In the end, she proved everyone wrong and I loved that about her.

Also in the book are Caroline's mother and sister, Penelope, David's mother, and various other summer visitors to Brighton. We don't see much of Caroline and Pen's mother, but when we do, she's pushing Caroline to find a match. Its not until the end of the book that we find out why. There is a scene towards the end of the book that made me want to hug her. Read the book...and you'll know why. Pen grew on me as the book progressed. She's another strong female and I hope she'll get her own book in the future. David's mother was a lot like Caroline's - strong willed, but physically weak. She also has a very moving scene that made me want to hug her. You know, come to think of it, the majority of the women in the book were very strong characters while most of the men were not so bright. With the exception of David and Mr. Hamilton, whom I would also love to see more of. Perhaps with Penelope? Hmmm? *wink*

I loved the storyline between David and Caroline. The whole "I love you, but I must find you a suitable match" was both fantastic and heartbreaking. We know and David knows that he has deep feelings for Caroline, but he feels like he is not worthy of love. Caroline is aware of her feelings pretty early on in the book, but it was fun to watch David slowly realize his feelings. Its heartbreaking because, inevitably, Caroline gets hurt along the way and it was hard to watch. She does grow stronger because of it and is able to move past it. What can I say? Its always fun to watch the man bumble along the way while the woman knows what she wants all along.

To Jennifer McQuiston, you've got a new reader here. One that cannot wait until Julianne's story. And hopefully Penelope's story. Please?


❤ ❤ ❤ ❤ ❤
About Jennifer McQuiston
A veterinarian and infectious disease researcher by training, Jennifer McQuiston has always preferred reading romance to scientific textbooks. She resides in Atlanta, Georgia with her husband, their two girls, and an odd assortment of pets, including the pony she promised her children if mommy ever got a book deal. Jennifer can be reached via her website at www.jenmcquiston.com or followed on Twitter @jenmcqwrites.


❤ ❤ ❤ ❤ ❤
Author Giveaway!
Two Digital Copies of WHAT HAPPENS IN SCOTLAND by Jennifer McQuiston.
a Rafflecopter giveaway
❤ ❤ ❤ ❤ ❤