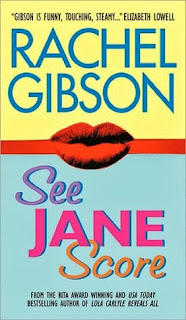 He shoots. She scores!

THIS IS JANE
A little subdued. A little stubborn. A little tired of going out on blind dates with men who drive vans with sofas in the back, Jane Alcott is living the Single Girl existence in the big city. She is also leading a double life. By day, she's a reporter covering the raucous Seattle Chinooks hockey team—especially their notorious goalie Luc Martineau. By night, she's a writer, secretly creating the scandalous adventures of "Honey Pie"...the magazine series that has all the men talking.
SEE JANE SPAR
Luc has made his feelings about parasite reporters—and Jane—perfectly clear. But if he thinks he's going to make her life a misery, he'd better think again.
SEE JANE ATTRACT
For as long as he can remember, Luc has been single minded about his career. The last thing he needs is a smart mouthed, pain in the backside, reporter digging into his past and getting in his way. But once the little reporter shed her black and gray clothes in favor of a sexy red dress, Luc sees that there is more to Jane than originally meets the eye.
Maybe it's time to take a risk. Maybe it's time to live out fantasies. Maybe it's time to....
SEE JANE SCORE!
❤ ❤ ❤ ❤ ❤
See Jane Score is, by far, my favorite Gibson book. I freaking love this book. I'm going to be saying love a lot in this review. Fair warning...
See Jane Score is the story of Luc Martineau and Jane Alcott. Luc is perfect. He's a hockey player, so that right there scores him a lot of points. He's Canadian. He's superstitious as hell. He's grouchy on the outside and a big teddy bear on the inside. He's also taking care of his 16 year old sister, Marie. He's adorably clueless when it comes to his sister. So cute! Jane is clueless about two things: hockey and fashion. She doesn't know what she's gotten herself into when she gets the assignment to cover the Seattle Chinooks...
As my favorite Gibson book, I feel its my duty to gush about the book as much as possible. I loved the characters, both main characters and the secondary characters. Jane and Luc were perfect as individuals and as a couple. Watching Luc with his sister, trying to figure her out and win her over will tug at your heartstrings. He means well, but has a difficult time expressing his feelings. When Jane walks into their life, she helps build the relationship between brother and sister. Jane can also hold her own against the team. Yes! We get to see more of the Chinooks in See Jane Score. The scenes of Jane with the team drinking and playing darts were hysterical. I loved the banter between all of them. When the players start bringing out pictures of their kids was hilarious. I loved meeting the team and reuniting with characters from the first Chinooks book. Its like coming home and rooting for your favorite team. Perfect all around.
❤ ❤ ❤ ❤ ❤
We have a winner for the first Gibson Project giveaway. Congratulations, Janice!! And a huge thank you to Avon for providing the books. I do have a second package that I'll be giving away towards the end of the Gibson Project. Keep an eye out for that!
﻿
Posted by CrystalBee at 3:00 AM