Santa, Bring My Baby Back by Cheryl Harper - Book Tour! 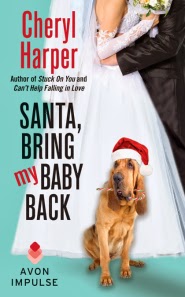 "Just wait until KT gets here. Then it's like Noah's ark around here, and those of us who ain't paired up gotta stick together so they don't shove us off of the boat." - Willodean Jackson

A bride abandoned at the altar…just in time for Christmas? 'Tis the season for second chances at Cheryl Harper's Elvis-themed Rock'n'Rolla Hotel.

After trying and failing at acting, modeling, dog grooming, and a dozen other jobs, Grace Andersen thought for sure she'd nail marrying a rich man. But dumped in a hotel chapel and strapped for cash, Grace needs a miracle - and a job.

If it were up to Charlie McMinn, Grace would be a married lady by now. Officiating weddings in gold lamé and a rock-star pompadour may not have been his idea of getting into the holiday spirit, but with a gorgeous bride asking for his help, Charlie doesn't mind sticking around his mother's hotel a few more days. Especially if it means getting Grace settled.

Grace isn't sure what to think of sexy, rugged Charlie, except that she can't deny the attraction between them, or how good it feels to finally fit in somewhere. Is she ready to give a certain place-and a certain someone-a real chance? Or will she deny a true Christmas miracle?


❄❄❄❄❄
I love a good Christmas story and while reading this one, I realized I don't read nearly enough Christmas themed books. Must read more!
Santa, Bring My Baby Back is the story of Charlie and Grace, two characters that have been burned by love many times. Charlie is convinced that everyone is after his mom's money. He loves his nice, orderly life so much so that he's willing to marry someone he doesn't love only because it falls in his life plan. Grace is an outsider. She's the black sheep of her family and her biggest goal in life is to find a place where she fits in. At first glance, one wouldn't think these two had much in common. Once Charlie and Grace start gravitating towards each other, its obvious to everyone, but themselves, that they are a match made in Graceland heaven.
Santa, Bring My Baby Back is another perfect example of a romantic Christmas story. I adored Charlie and Grace. Watching both of them stumble along was almost painful, but it only made me root for them more. There were moments where I wished I could reach into the book and smack Charlie upside his head. The man is a giant doofus when it came to Grace. I don't know what it is about men, but I love it when a hero is so frazzled by the heroine that he constantly puts his foot in his mouth. And let me tell you, he does it a lot. Grace has her own "insert foot now" moments, but not nearly as many as Charlie. That, I think, makes them all the more likeable.
I'm sad that this is our last visit to the Rock 'n Rolla Hotel. I've gotten to know and love all of the characters that call the hotel home. I do believe that Santa, Bring My Baby Back was a fantastic ending to this little series. Not only do we get Charlie and Grace's story, we also get more of Willodean's background. I loved that we know more about her marriages and how the infamous hotel came about. If you are a fan of the first 2 books, then you'll be happy to know that you will see a lot of the previous characters. And that ending... Awww! Loved every moment of this book.
Please make these reindeer hurry
Well their time is drawing near
It sure won't seem like Christmas
Until my baby's here
Don't fill my sock with candy
No bright and shiny toy
You wanna make me happy and fill my heart with joy
Then Santa, hear my plea
Santa bring my baby back to me
- Santa Bring My Baby Back to Me, Elvis Presley
❄❄❄❄❄
Chapter One Excerpt, Santa, Bring My Baby Back

Charlie rolled his head from one side to the other, straightened his shoulders, and then fought his way out of the shiny gold jacket. He slipped it on the hanger in the small dressing room behind the stage and then carefully closed the door. He stretched his arms and soaked in the bright winter sunlight streaming through the windows.

When his stomach growled again, he hit the door to the lobby with a stiff arm, set on getting back to his own schedule. After four determined steps, he stopped. He could see a line of light under the door to the bridal suite.

Charlie mentally cursed again. Something about that light told him this was going to be more trouble than a man who hadn’t eaten in over four hours should attempt to deal with. He’d sent his assistant for the day out to check on the bride and groom earlier. When she’d come back to say the rooms were dark, he’d sent her on to lunch. He should have followed, obviously. If that light represented his late bride and groom, his schedule would be off for the rest of the day.

After two perfunctory knocks, Charlie turned the knob and shoved open the door.

He froze on the spot when he saw the bride seated in a froth of wedding dress. Like a priceless work of art, she was lit by a spotlight that highlighted the flawless creamy skin of her bare shoulders, the gleam in her dark hair, and her bright red lips. When his eyes met hers in the mirror’s reflection, he couldn’t remember just exactly what he thought he might say to the inconsiderate bride or groom if he ever found either of them. His schedule was forgotten. He was lucky to remember to breathe in and out.

A small frown wrinkled the pale skin of her brow and something about her east Tennessee twang set everything back in motion.

He reached up to run his hand through his hair but hit crunchy product and decided to rub his neck like that was what he’d intended all along. “I was hoping that you could tell me. What happened to your groom?”

“Well, I can’t say I exactly expected this, but I ain’t as shocked as I should be either.” She gave him a wide smile that didn’t quite look genuine, but he liked it a whole lot better than tears. “Tommy Joe told me he’d meet me over here, knock on the door when he was ready. Since he’s always late, I expected to wait a bit but . . .”

She shrugged, and he had to bite his tongue to keep from being drawn back under her spell as light played across the pale skin of her shoulders and chest. She stood gracefully and smoothed the sides of her elegant wedding dress. Her hourglass figure was outlined faithfully by the dress and accented by dainty hands she propped on her hips. “He didn’t sound like a man looking forward to his weddin’. Cold feet set in, I imagine. My hook wasn’t set, and I guess he wriggled off.”

Charlie frowned as he considered her answer. He fought back the urge to ask what kind of fool would wriggle off her hook. A man might not know he was caught until it was too late . . .  but what a way to go. 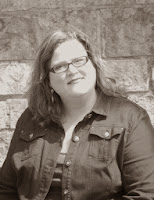 Whether she's writing, reading, or just checking the items off of her daily to-do list, small-town girl Cheryl Harper loves her romance mixed with a little laughter. When she's not working, you will find her ignoring housework, cursing yard work, and spending way too much time with a television remote in her hand.