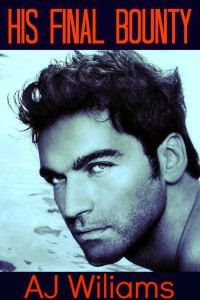 "Did you just growl at me?" - Jefferson Anders

His Final Bounty
Bounty for Hire #4

Eva Rosenberg hacks a secret file of Jefferson's and discovers the man who shattered her heart and her world has one giant secret.

With a confrontation looming with Eva and a possible death threat, they must work as a team to find forgiveness and defeat the enemy that waits in the shadows.

I'm going to have a difficult time reviewing His Final Bounty, not because I didn't like the book, but because I really want to talk about the entire series. I'm going to save a series review for later, so this will be a review for the fourth book in the Bounty for Hire series.

AJ Williams has done it again. She has the knack of combining a sizzling romance with fantastic suspense to create a jaw dropping story. I loved His Final Bounty! First of all, we finally get to know the mystery that is Jefferson Anders. We've known all a long that something was going on with him and now we know what that something - or someone - was. Jefferson is alpha male to the max. When his past comes to harm his family, rather than putting them in danger, Jefferson decides it is best to stay away. As you might have guessed, that doesn't sit well with his family or with Eva. Holy cow, Eva is one kick-ass character. She can totally take as much as she can give. I loved watching her pester Jefferson. She still loves him, but there was no way in hell  she would let him get off easy. She pushes and pushes until he opens the old wounds and confides in her. The chemistry between Jefferson and Eva is off the charts. One spark and they'll ignite. I loved these two together just as much as I loved them as individuals.

His Final Bounty is short, but it packs quite a punch. The book is equal parts sizzling hot mixed with a gritty suspense that'll keep you on your toes. And most importantly, it answers all the questions I had about the first 3 books. I have come to love this series and I'm sad to see it end.

Eva wasn’t sure when it happened, but her body called to her in a way that she hadn’t felt in years. After all this time, he still wore Ralph Lauren Polo Black. She loved that smell. Her reaction to him spurred her body closer to his, lightly brushing her nipples against his side. Every sensation from Jefferson rubbing her back, to her tracing circles on his chest increased her breathing. Her nipples tightened and the dampness increased between her legs.

“Jefferson.” Her voice was soft as she moved her finger to his nipple in a sensual circle.

“Eva,” his growl pressed her to continue. There was something about the way he growled her name that caused her to stop circling and started to use her fingers to rub his nipple with her thumb and finger.

Lifting her head up from his chest, she kept rubbing his nipple as she looked into his eyes.

“Tonight, please just give me this one night. After that, we will go our separate ways. I just need to feel you.”

“There will never be ‘just one night’ with us, Eva. If we do this, it’s for keeps. Do you understand? I could never let you walk away, nor would I allow myself to walk away from you again.”

His word slammed over her. His eyes danced in the light. She could see that he too needed tonight. As much as she wanted more nights, she didn’t think she could ever give him more. Then again, maybe she could, but it all depended on him. She had the truth, but it didn’t really ease the hurt she still felt in her heart.

She didn’t respond at first, as her thoughts rolled through her mind.

“I’ll give you tonight, but we will talk,” he declared.

She didn’t want to talk. She wanted all or nothing and tonight it was all. If she couldn’t have tonight, then she could go back to having nothing in her life. She’d had five years of practice. What was another fifty? She nodded edging closer to his body.

She didn’t trust herself to say anything, afraid she might say no talking, just fucking, because that’s all she wanted. She nodded again, placing a light kiss on his chest.

Lifting her head up she gazed into his dark eyes, waiting to see if he understood or at least accepted her response. He moved over, roaming her face and then his eyes narrow for just a second.

Please, she begged silently for him to just give her now.

She touched her lips to his. It was ecstasy. His full lips upon hers. At first, he didn’t move, so she gave his nipple a pinch, causing him to open his mouth.

AJ grew up in a small southern town in Missouri. It was there that she discovered her love of writing. Having the ability to create a story from nothing into something held her spellbound. She holds a bachelors degree, and will on occasion find it useful. Currently, AJ lives in Kansas City, Missouri, with her husband, their two small children and two dogs.

AJ loves learning about new things, playing games with her family, and listening to music. She loves romantic movies as well as science fiction. If truth be told, she loves fantasy and science fiction movies just a little bit more.

At given time she can be found letting her kids believe she has super powers.

a Rafflecopter giveaway
Posted by CrystalBee at 3:00 AM