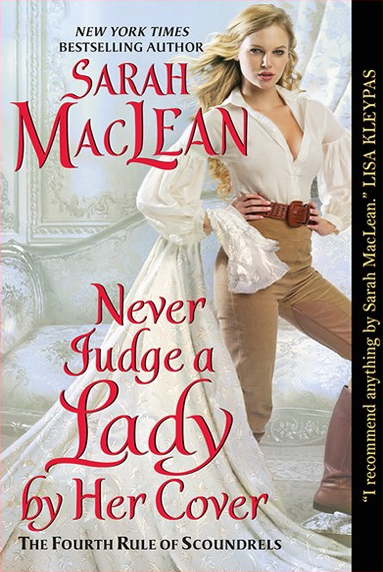 Welcome to the extra special cover reveal for the one, the only, Sarah MacLean!

By day, she is Lady Georgiana, sister to a duke, ruined before her first season in the worst kind of scandal. But the truth is far more shocking-in London’s darkest corners, she is Chase, the mysterious, unknown founder of the city’s most legendary gaming hell. For years, her double identity has gone undiscovered...until now.

Brilliant, driven, handsome-as-sin Duncan West is intrigued by the beautiful, ruined woman who is somehow connected to a world of darkness and sin. He knows she is more than she seems and he vows to uncover all of Georgiana’s secrets, laying bare her past, threatening her present, and risking all she holds dear...including her heart.

“I’ve always loved cross-dressing heroines – the trope is probably my most favorite of all the romance tropes, so when I wrote Chase, I wanted to play with the cross-dressing heroine idea. She doesn’t just dress in trousers – she’s also built a persona to match. She's a pre-Victorian Wizard of Oz, so to speak, thought to be a man, but one who has never been seen in public, and about whom very few people know the truth…namely, that he’s a she.”

“Seeing a woman in pants has not been shocking for about a century.

But when one remembers the historical context of Regency England it is extraordinary. I hope this cover attracts readers who are looking for something different, because Sarah is blazing her own path in historical romance.“

“It was a fabulous challenge."

Sarah MacLean grew up in Rhode Island, obsessed with historical romance and bemoaning the fact that she was born far too late for her own season. Her love of all things historical helped to earn her degrees from Smith College and Harvard University before she finally set pen to paper and wrote her first book. Sarah now lives in New York City with her husband, baby daughter, their dog, and a ridiculously large collection of romance novels. She loves to hear from readers. Please visit her at www.macleanspace.com.
Posted by CrystalBee at 12:00 PM