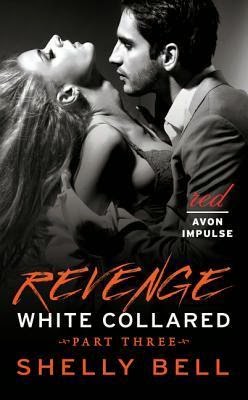 Motivated by honor …
After a gruesome discovery, the men in Kate's life unite to protect her from imminent danger, but Jaxon becomes consumed by the fierce desire to possess her fully. Kate trusts him enough to surrender to him in the bedroom, but she still fears the vulnerability of complete and utter submission.

Enslaved by pleasure …
Jaxon continues to push Kate's sexual and emotional boundaries, penetrating her defenses and crumbling the walls she has built around the painful memories of her past. But just as she opens her heart and accepts a future with Jaxon, the devastating truth about Alyssa's death shatters the tenuous bond they share, testing their relationship and propelling her directly into the path of a desperate murderer.

Holy Crap! This story just keeps getting better and better with each installment. While I thought the second installment was hotter than the first, Revenge definitely kicked the kink level up a few dozen notches. And we finally get to see a little bit more of the suspense/thriller aspect to the story. Its lying low, but it peaked out from behind that scary bunch of bushes where it has been waiting to pounce. We meet a couple new characters in this installment and we get to know a background character a little better. There were a lot of reasons why I loved Revenge. I love Kate and Jaxon's relationship. His fierce determination to make Kate his and to keep her safe is not only incredibly sweet, but also friggin' hot. Knowing that he may have to share Kate with a sadist to clear his name, Jaxon is torn between allowing her to explore the pleasures/pain of Benediction and wanting to kill any man that dares to look in her direction. I also loved the banter between Kate and Rachel. I would love to possibly see her in another book...

I adore Shelly Bell and I'll be adding more of her books to my Kindle. Her writing keeps me on my toes. From the sweet moments between Jaxon and Kate to their sizzling hot "scenes," I never know what to expect next from Shelly. I can't wait to see what she has in store for us next.

I hope you are enjoying these little fun extras that Shelly Bell put together for the tours. I'm having fun picking and choosing which extras go well with each installment.

5. There’s only one way to practice it.

6. People who engage in the lifestyle are abusers or suffer from abuse.

7. People who engage in the lifestyle have a psychological condition.

8. People in the lifestyle are promiscuous.

9. No one you know practices it.

10. It is your business to know what happens behind closed doors.

TRUTH: Even if your neighbors are part of the lifestyle, it is none of your business. They have the same right to privacy as you, so unless they choose to divulge their sexual activities, don’t worry about it. They won’t bite you without your consent.

WHITE COLLARED, PART THREE: REVENGE PLAYLIST (Spotify)
Chapter 1. Demons by Imagine Dragons
Chapter 2. Numb by Linkin Park
Chapter 3. Janie’s Got a Gun by Aerosmith
Chapter 4. New Way to Bleed by Evanescence
Chapter 5. Pain by Three Days Grace
Chapter 6. Human by Christina Perri
Chapter 7. She Ain’t You by New Hallow
Chapter 8. My Songs Knows What You Did In the Dark by Fall Out Boy
Chapter 9. Come by Prince
Chapter 10. So Far Away by Staind
Chapter 11. 21 Guns by Green Day