Review of DYLAN'S REDEMPTION (The McBrides #3) by Jennifer Ryan 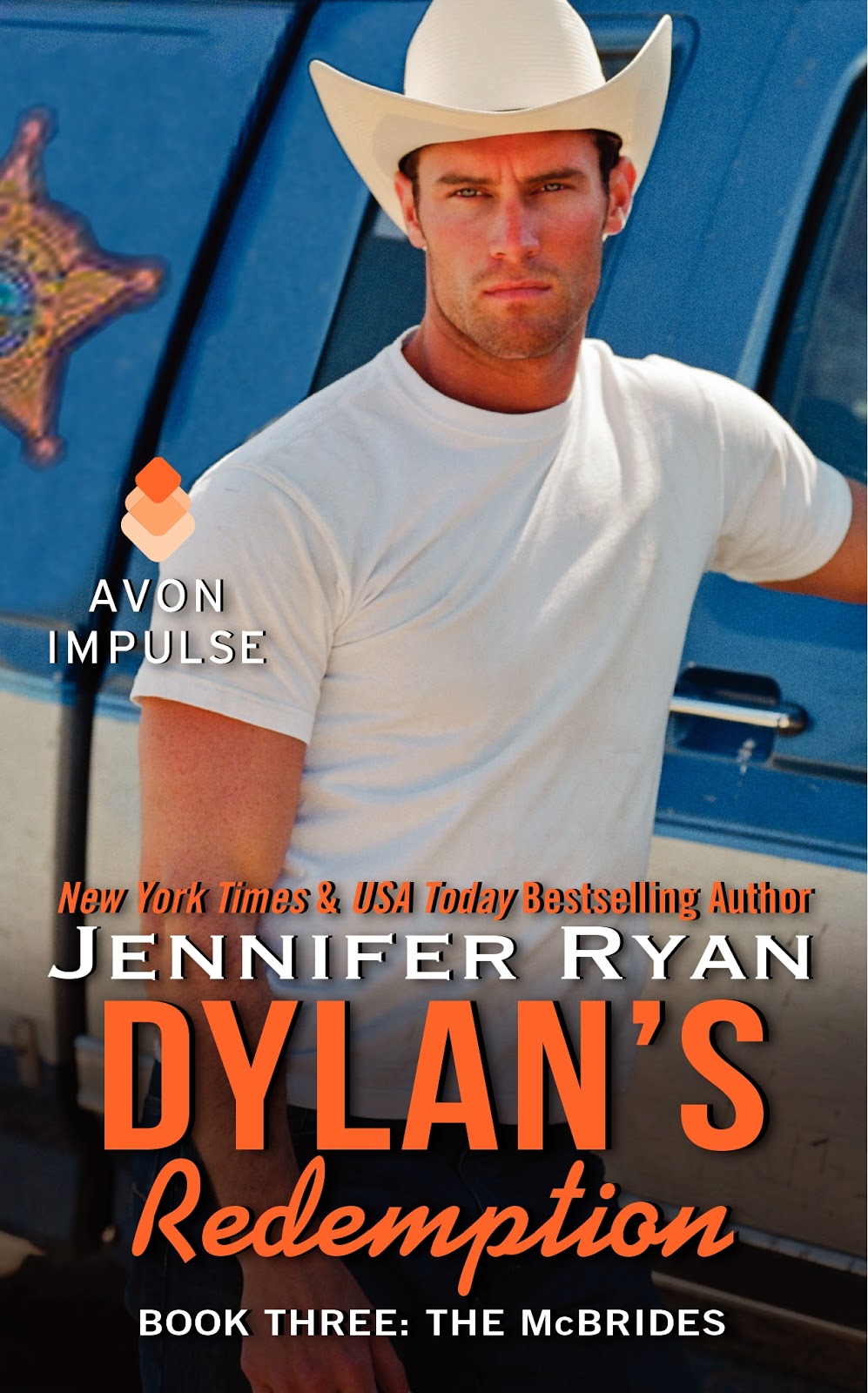 Jessie Thompson had one hell of a week. Dylan McBride, the boy she loved, skipped town without a word. Then her drunk of a father tried to kill her, and she fled Fallbrook, vowing never to return. Eight years later, her father is dead, and Jessie reluctantly goes home—only to come face-to-face with the man who shattered her heart. A man who, for nearly a decade, believed she was dead.

Dylan accepted the position as sheriff of Fallbrook looking for a fresh start and a chance to uncover the truth about Jessie's disappearance. He knew he'd have to face a few ghosts … he just never thought one would be Jessie, all grown up, stunning … and alive. The pull between them is instant, but Dylan's heart has already mourned Jessie, and she has secrets she can never share. Can they escape the darkness of their past for a chance at a bright future together?

Oh, my god. This book... Dylan's Redemption took me for a ride through every emotion. I don't know how I'm going to get through this review, but I'll give it a go.

I have loved Dylan from the first moment we met him in the McBride series. He has such a tortured, but kind soul. He fell in love with Jessie when he was eighteen, but he knew that they were both too young. After spending an incredible night in her arms, Dylan forced himself to leave and he spends the next eight years believing that his one true love is dead. He missed all the signs of her abuse and had to live with himself thinking that her death was partially his fault. How can a person live through that heartbreak? Dylan finds his niche in life and makes it his mission to help people in abusive relationships. Dylan stole my heart. He's so heartbroken at the beginning of the book, but once he sees that Jessie is alive, he is determined to never let her go.

Jessie... Poor little Jessie. She broke my heart so many times. Her own father nearly killed her, but that wasn't the only heartache she faced at the tender age of fifteen. The love of her young life left her without a goodbye. She doesn't know if he loved her or not. Did their one night together mean nothing to him? It meant the world to her and it resulted in the creation of a beautiful life. Jessie's life begins to spiral out of control when her heart is broken once again, but with the love and support of those that saved her, Jessie builds a successful career and begins to mend her heart. Jessie is an incredibly strong character. She's had to fight and claw her way through life. She stood up to her drunk and abusive father. She continued to amaze me when she comes back to Fallbrook. She doesn't stop fighting until her family is complete and happy again.

I adored Dylan and Jessie together. My heart soared the moment they laid eyes on each other again. I loved watching them fumble as they find their way back to each other. I swooned as Dylan started wooing Jessie again. The sweet words of love and admiration that flowed from him every moment he spent with her. I love watching Dylan's son attach himself to Jessie. They were meant to be a family and Dylan is determined to make his wish come true.

Greg! Please tell me he will find love. He was one of the many secondary characters that I loved. Greg is very protective of Jessie. At first he isn't quite sure of Dylan. He only knows Jessie's side of the story and what she believed happen. Once Greg is sure that Dylan will not break her heart, he helps the couple come together. Greg and his dad are such lovable characters in stark contrast to Dylan's own parents. I would write a whole paragraph just on how much I despised them. And of course, we also see a little of Brody and Owen's families. So much love in one book!

I had been waiting for Dylan's story since I met him. I knew his story was going to be one of true love and finding it again after so many years. There is no real drama that keeps Dylan and Jessie apart. They spend the majority of the book learning about what really happened in the past and getting to know each other again. Jennifer Ryan, thank you for writing this beautiful story. I sincerely hope that this is not the end of the McBrides series. If it is, it'll be a series that I will revisit time and time again. If it isn't the end, I would love to see Greg get his happily ever after.

Until then, I suggest reading Dylan's Redemption with a box of tissues. I devoured this book and spent the night crying as I read it on my Kindle.

Jennifer lives in the San Francisco Bay Area with her husband and three children. When she isn’t writing a book, she’s reading one. Her obsession with both is often revealed in the state of her home, and how late dinner is to the table. When she finally leaves those fictional worlds, you’ll find her in the garden, playing in the dirt and daydreaming about people who live only in her head, until she puts them on paper.
Please visit her website at www.jennifer-ryan.com for information about upcoming releases.