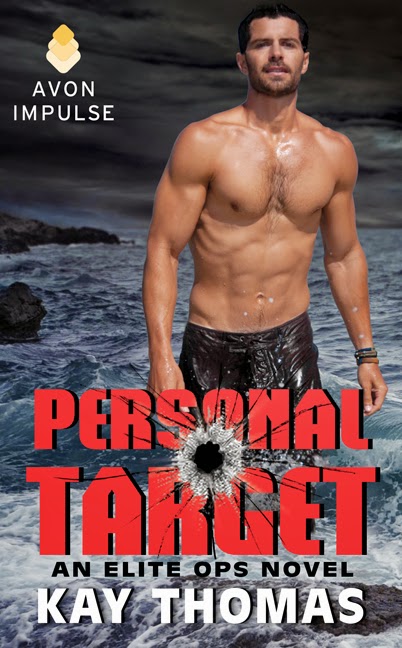 Dammit Jenny. Do you have any idea how much you scared me?" - Nick Donovan

AEGIS: an elite team of ex-military men working under the radar of most governments. If you have a problem no one else can handle, they can help.

A former SEAL and Black Ops specialist who left the CIA, Nick Donovan gave up a life on the edge to work in the private sector. But that didn't stop his enemies from coming after him—or his family. In a case of mistaken identity, a drug cartel kidnaps his sister-in-law's best friend … a woman from Nick's past.

One minute Jennifer Grayson is housesitting and the next she's abducted to a foreign brothel. Jennifer is planning her escape when her first "customer" arrives. Nick, the man who broke her heart years ago, has come to her rescue. Now, as they race for their lives, passion for each other reignites and old secrets resurface. Can Nick keep the woman he loves safe against an enemy with a personal vendetta?

Holy Bananas! This book was crazy. As my introduction to the world of Kay Thomas, I had no clue what I got myself into. Was it going to be heavy on the suspense? Or was it going to be more romance? I had no clue... And I am so glad I went into Personal Target 100% clueless because the book kept me on my toes the entire time. The twist and turns this book has... So good!

Personal Target sends Nick Donovan and Jennifer Grayson on a race. Not only for their lives, but also a race to find the truth behind recent bombings and massacres. For Nick, everything is at stake. The woman he loves, as well as finding the truth behind the death of his parents. For Jennifer, she's trying to stay alive long enough to tell Nick the truth about what happened between them so many years ago. Just when they found each other once again, both are pushed into the fight of their lives.

Nick and Jennifer... Nick is all alpha male. He's intelligent, quick on his feet, and can spot a sniper at any distance. He's always loved Jennifer and was wounded when she stopped all communication between them. Now that he's older, Nick is tried of being the cold hearted fighter he's trained to be. He's tired of being on the outside looking in when it comes to his family. This all changes once Jennifer steps back into his life. On one hand, he wants to protect her and keep her with him. On the other hand, he starts to wonder that in order to keep her safe, he has to push her away. Jennifer is a little lost. Newly divorced and in a new job, she is house sitting for her friend when she's mistaken for someone else. While she is an extremely strong female, it is understandable that she's scared out of her wits. Nick spends most of the book saving Jennifer's life, but she's got some fight in her as well. I loved Nick and Jennifer. They have an uphill battle for pretty much the entire book. One of their first scenes together is at a brothel where Nick is expected to do the unthinkable. From there, they spend the rest of the book finding each other again and realizing that they still love each other. Now that they are together again, they'll do anything to never be separated again.

I loved Personal Target. As usual, I can't wait for the next book and in the meantime, I'll be picking up the first book in the series. While there is a HEA at the end of Personal Target, there are some unanswered questions that I think will be addressed as the series continues. I think I know who the hero and heroine will be in the 3rd book and, if it is them, I'm excited to see how their story will play out.

Kay Thomas didn't grow up burning to be a writer. She wasn't even much of a reader until fourth grade. That's when her sister readThe Black Stallion aloud to her. For hours Kay was enthralled—shipwrecked and riding an untamed horse across desert sand. Then tragedy struck. Her sister lost her voice. But Kay couldn't wait to hear what happened in the story—so she picked up that book, finished reading it herself, and went in search of more adventures at the local library.

Today Kay lives in Dallas with her husband, two children, and a shockingly spoiled Boston terrier. Her award-winning novels have been published internationally.