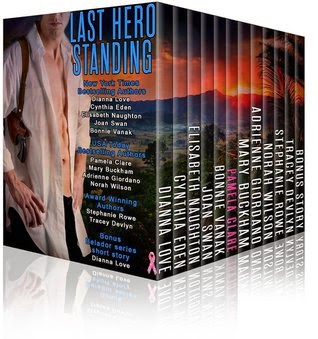 If you are a fan of Pamela Clare, author of popular I-Team series, then you'll probably know that she's been battling breast cancer. In support of Pamela, 10 authors have donated their works and created this box set filled with 11 emotional and action packed stories. All proceeds from the Last Hero Standing box set go directly to the medical fund to support Pamela's battle. Last Hero Standing will only be available for .99¢ for one month only. Pick it up on October 28th and support this amazingly talented author.

I will be giving away one copy of the Last Hero Standing box set to one lucky winner. More information located at the end of the post.

Kiss the Enemy by Dianna Love
Her only hope is in the hands of her enemy.

Slye Temp operative Margaux Duke is chasing an international terrorist who murdered the last of her family. But her plans go up in smoke when her agency is in the crosshairs of the dangerous killer, forcing her to turn rogue to protect the only family she has left - her team. This is no time to get involved, especially with an enemy who steps between her and the terrorist she has to stop.

Logan Baklanov has been known by many names in the underbelly of international terrorism and will do whatever it takes to shield those he loves from the treacherous world he lives in. When his brother’s life is in jeopardy, Logan takes on a role that places him at the top of the most-wanted lists of government security agencies in every country. He accepts the no-win situation, willing to make the ultimate sacrifice until a long legged beauty draws the attention of his deadly target and screws Logan’s carefully planned mission.

Margaux and Logan must join forces in a dangerous game to save a major city from a powerful psychopath, but their ruse escalates out of control when the heat smoldering between them threatens to explode.

First Taste of Darkness by Cynthia Eden
It was supposed to be a one-night stand.

Hot sex. No regrets. Jess Delaney has spent her life playing the role of the good-girl. On a trip to Vegas, she decides to walk on the wild side when she meets mysterious Blake Landon. Rich, powerful, and carrying plenty of secrets, Blake is unlike any man she has ever met before.

Blake is also far more dangerous than anyone she’s ever encountered. When enemies from Blake’s past attack, Jess finds herself caught in a deadly cat-and-mouse game. Her only hope of survival? Trusting a man who knows too much about the dark side of life…and a man who—with every sensual touch—binds her to him with a desire that burns red-hot.

Once you step into the darkness, there’s no turning back…

America’s sweetheart, Avery Scott, is up for the biggest role of her life, one with Oscar potential. When her girl-next-door fame prevents Avery from doing the in-depth research for the sensual role herself, her assistant insists on traveling to an exclusive couples resort to handle the job. But when her friend goes missing, Avery’s focus shifts from landing the role of a lifetime to finding out what happened on the sultry Caribbean island.

A weekend that will change her life…

Avery contacts Aegis Securities and hires one of their elite operatives to accompany her to the resort. She just doesn't expect to get former undercover FBI agent Cade Blackwell—the man who ripped out her teenage heart twelve years before. Avery’s a good actress. With a little work and a convincing disguise, she’s confident she can fool the staff at the resort. The question is…can she fool Cade? Because one weekend at the sexiest resort in the world with the only man she’s ever loved will expose her to more than just a kinky new lifestyle. It’ll expose her to numerous wicked firsts that will test every ounce of her self-control. And if she’s not careful, she could lose her heart—and her life—in the process.

Sinful Deception by Joan Swan
In need of fast cash to help her brother sneak into the US, Tova Sorenson takes a job as a sexcam operator, sparking an unlikely friendship with her very first customer. When Marcus Lucero's border patrol teammate suggests a sexcam site for female companionship without heartache, Marcus figures he's got nothing to lose.

While danger from Tova's dark side brings them together in the flesh where their chemistry burns hotter than hell, it also exposes their divergent loyalties which could end not only their desires, but their lives.

Taken by the Alpha Wolf by Bonnie Vanak
From the moment he saw the pale-haired beauty, Draicon werewolf Etienne Robichaux vowed to claim Cindy Parker as his mate. Nothing will stand in his way. After learning she’s targeted by a Columbian drug mob, the former Navy SEAL will do everything in his power to protect her.

His touch ignites her passion and his tender concern touches her soul. But Cindy has a deadly secret she hides from Etienne, one that not only risks losing her heart to handsome shifter, but her very life.

Laura Nilsson knows what she wants: a successful career as a broadcast journalist—and a little fun between the sheets now and again. What she doesn't want is marriage or kids. When a ripped and sexy stranger intervenes to stop a couple of drunks from harassing her in a hotel bar in Dubai City, all she can think about is spending the rest of the weekend with him—in her bed. There's just one little problem. Unmarried sex is illegal in Dubai.

Navy SEAL Javier "Cobra" Corbray is on his way home from a rough deployment in Afghanistan when he finds himself having dinner with "the Baghdad Babe." What she wants from him—sex with no strings—could land them both in prison. Still, he's more than happy to oblige her. She's confident and sexually assertive, and he's secure enough to lie back and let her make the first strike. But, as she's about to find out, he's more than her match.

… or the beginning of something more?

Yet, neither Laura nor Javier has any idea what lies ahead—or how this weekend of mind-blowing sex will impact their emotions. Will they act on their new-found feelings in time, or will they let something special slip away… perhaps forever?

Invisible Fears Book One: Kelly McAllister by Mary Buckham
He’s a preternatural fighting for the humans.

She's a human fighting for the preternaturals.

Kelly McAllister’s Invisible Recruit mission in Sierra Leone is to locate and secure a threat to humans and preternaturals. Van Noziak is also there, with his own secret mission, one that’s on a collision course with Kelly’s. In deepest Africa the race against a deadly bloom reveals secrets, exposes fears, and forces unlikely alliances.

The Evasion by Adrienne Giordano
His role on an anti-counterfeiting task force earned NYPD Sergeant Gabe Townsend the catch of a lifetime—tough as nails but sexy as hell Jo Pomeroy. The woman has a body that drives him wild and a way of attracting danger that’s making him crazy. And her relentless pursuit of an elusive criminal has his protective instincts in overdrive.

Jo didn’t get to be a hotshot attorney by giving up easily. Her high-end clients count on her to keep knockoffs of their luxury goods off the streets. Distractions are the last thing she needs. Especially six-foot-three, hard body calendar-worthy distractions.

She failed once, letting a smuggler slip through her grasp. Next time, he’ll have nowhere to run. A lead takes Jo and Gabe to a small town where not everything—or anyone—is as innocent as it seems. Making this bust could be the biggest break of her career…but at what risk to her newfound love?

Nightfall by Norah Wilson
Aiden Afflack (a vampire) is as charming, sexy and easy-going as he is gorgeous. Unless you happen to be a rogue vampire, in which case he’s apt to be the last thing you see. Sam Shea is a wildly successful nature photographer whose prescient dreams lead her to some of the world’s most turbulent, awe-inspiring weather phenomena.

When their paths cross and Aiden discovers that his proximity to Sam warps her psychic power, causing her to hone in on vampire violence instead of violent weather, he knows he’s found a priceless tool in his fight to rid the world of rogues.


Sam has a deep-rooted aversion to having her powers exploited, but once her eyes have been opened to the lives she can help save, she can’t withhold her cooperation. But she can deny Aiden the other thing he wants from her, which makes her unique among women. And absolutely irresistible to Aiden!

Alaskan bush pilot Cort McClaine thrives on danger, but the daredevil flier is closing in on a crash and burn if he doesn't get a handle on the past that's still haunting him. The last thing Cort needs is a woman who reminds of how much he's already lost, but that's exactly what he gets when a sexy-as-hell accountant climbs into his cockpit.

With her diamond earrings and high heels, ex-climber Kaylie Fletcher has cut her ties with the snow-capped mountains that have claimed the lives those she loves. But when her family goes missing on Mt. McKinley, Kaylie must brave the land she fled to find them before it's too late.

SURVIVAL BECOMES THEIR ONLY GOAL.


When a madman targets Kaylie, there only person she can trust is Cort, a ruggedly handsome protector who will either heal her heart or break it forever.

Latymer by Tracey Devlyn
Traitor or savior . . . or something far more devastating?


William Townsend—Lord Latymer—lost the woman he loved because of his greed and his ultimate deception of two powerful countries. Now, he must protect his nine-year-old son from the same fate. Latymer has only one chance to escape his enemies: board a ship that would carry them both to America and a new life. But first he must find his missing son, elude a vengeful grieving brother, and kill a beautiful French assassin. Time is slipping through his fingers and Latymer has twelve hours before his ship and his future sail away.

In the honor of my friends and family members that have been touched by cancer, I will be giving away one copy of Last Hero Standing. To enter, please leave a comment with a valid email address. This giveaway is open internationally. As long as I can gift you a copy of Last Hero Standing via Amazon, you may enter. I will pick a winner on TUESDAY, October 28th. That person has 24 hours to respond to my email. If they don't, I will pick another winner.

Good Luck!
Posted by CrystalBee at 6:00 AM