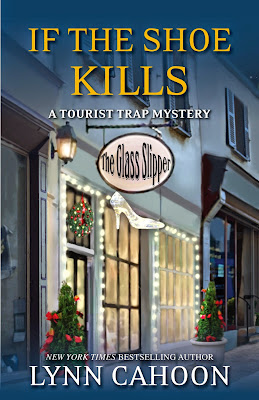 The tourist town of South Cove, California: a lovely place to spend the holidays. But this year, shop owner Jill Gardner discovers there’s no place like home for homicide…

As owner of Coffee, Books, and More, Jill Gardner looks forward to the hustle and bustle of holiday shoppers. But when the mayor ropes her into being liaison for a new work program, ‘tis the season to be wary. Local businesses are afraid the interns will be delinquents, punks, or worse. For Jill, nothing’s worse than Ted Hendricks—the jerk who runs the program. After a few run-ins, Jill’s ready to kill the guy. That, however, turns out to be unnecessary when she finds Ted in his car—dead as a doornail. Detective Greg King assumes it’s a suicide. Jill thinks it’s murder. And if the holidays weren’t stressful enough, a spoiled blonde wants to sue the city for breaking her heel. Jill has to act fast to solve this mess—before the other shoe drops…

The holidays were supposed to be a time of goodwill, celebration, and community. You couldn’t tell it from the glares going around the table as Mayor Baylor talked. Earlier, the leader of our little town had the group eating out of his hand. Then all hell broke loose. Focusing on the uproar going on at the Business-to-Business monthly meeting, I wondered if the shop owners gathered around the mismatched tables had even seen the calendar. As South Cove’s council liaison, I volunteered my shop each month for the meeting. I’m Jill Gardner, owner of Coffee, Books, and More, and president of the I-HateMayor-Baylor Club. A red-faced Bill Simmons, chair of the business council and owner of South Cove Bed-and-Breakfast, stood at the front of the table, trying to get the group to quiet down.

Aunt Jackie issued a shrill, earsplitting whistle, two-finger variety. My aunt could make me smile even in the worst situations. She’d been a rock the last year during all the craziness that had been my life. Now I didn’t know what I’d do without her help with Coffee, Books, and More. Or without seeing her on a daily basis.

The room finally quieted. I’d been the city council liaison with the business community in our little coastal California tourist town for the last five years. I’d never heard this kind of uproar over a mayor’s mandate before. Maybe the Honorable Mayor Baylor was losing a bit of his power over the group.

“Look, I know it’s a bad time for many of us to take on a charity project, but think of it this way, you’ll have an extra pair of hands for the season.” Bill pulled out what he’d thought would be his trump card.

“I don’t understand what you’re all so upset about. I got you free help for the busiest season of the year.” Mayor Baylor glared at me, like their reaction was my fault. “These people want to work. We need to be charitable in our attitude.” This time, his scowl was full-on directed at me.

I put on my sweetest smile, the one I saved for the few customers I truly didn’t like. “I’ve already signed up the coffee shop to participate. How about the rest of you?”

“Not all of us have South Cove’s finest working part-time in our shops.” Darla Taylor, owner of the winery and editor of the local news for the South Cove Examiner, sniffed. “I heard he couldn’t place these losers anywhere else so Ted paid the mayor to take on these stragglers.”

“That is totally unfounded speculation,” Mayor Baylor blustered, his face turning a bright shade of scarlet. He turned his stare from me to Darla. “I hope I won’t see anything close to that being reported in the Examiner.”

I turned my head so no one would see my smile widen. As one of the local media, Darla’s nose for rumors was spot-on. Ted Hendricks, program director for Bakerstown’s welfare-to-work program, Work Today, had come to our tourist town of South Cove with an offer. Ten participants would work for eight weeks with a local business in an intern capacity. South Cove was their last chance.

The mayor’s gaze shifted down the table, landing on Josh Thomas, a strong Mayor Baylor supporter. Except even I could see that His Honor wasn’t winning any points with his friend today.

“Delinquents. You want me to let a delinquent run wild in my store. Talk to my customers and probably scope out my merchandise so they can rob me blind when I turn my back?” Josh owned Antiques by Thomas, the most recent business to open its doors on Main Street. Today, he pounded a chubby finger on the table.

“Of course, you’d have a problem with this. You don’t even know that they are kids, or if they had trouble with the law. Just because someone is down on their luck doesn’t mean they are a bad person,” Sadie Michaels shot back. Sadie, owner of Pies on the Fly, was my main supplier of desserts for the coffee shop. And a strong advocate for the underdog in any fight.

We’d gone down this path before. Josh and Sadie rarely saw eye to eye on any discussion. For my part, I liked the way she called him on his prejudice and narrow-mindedness. Bill tried again to short-circuit the argument he saw developing. “We don’t have time for a political discussion on the topic. This is a done deal. They’re coming today for the initial meet-and-greet with a walk through town. Three hours on two weeknights, and six hours on Saturday. Even if you just had them stock shelves, at least they’d be learning about retail and our special niche as a tourist destination.”

I jumped into the fray. “We only need three more host businesses. We’ve already had seven businesses volunteer. The mayor’s office is even participating.” My friend Amy, who did most of the clerical work for the city as well as served at the city planner, was ecstatic to have a little help, even if it was only for a few hours a week.

Aunt Jackie set a slice of cheesecake in front of Josh. They’d been dating off and on since the summer. He wanted more on, she kept saying she wanted the off. She smoothed his black suit jacket with her hand, brushing lint off the sleeve. “You could use help organizing your store. Just think of what all you could get done with some young elbow grease.”

Josh peered up at my aunt and I swear I saw his heart melting, just like the big green monster in the Christmas story. “Fine, I’ll take one.” He sounded like he was agreeing to foster a shelter animal, rather than a person.

Darla waved her hand. “I’ve got plenty of work at the winery. But let’s try to match me with someone who doesn’t have alcohol issues.” I wrote her name down. I didn’t even care if she was taking on an intern for news fodder, which I suspected. Now I just had to clear the caveat with Ted Hendricks, the program director.

I searched the faces of the group gathered around the table, drinking coffee and, except for a few who had already volunteered, not meeting my eyes. I needed one more placement. Ted would be here in less than thirty minutes to finalize the plans.

Sadie spoke first. “Sorry. I’d take one, but the work with the bakery is first thing in the morning. I wouldn’t have anything for them to do on evenings or weekends. That’s the time I devote to Nick and the church.”

Sadie ran Pies on the Fly out of a remodeled garage behind her house. Calling her business a bakery was a little generous.

Marie Jones, the owner of The Glass Slipper, had her head down, trying to curl up in her seat, apparently hoping I wouldn’t see her. I could even see her lips moving in some sort of chant. I watched her closely, wondering if she was a fan of the Serenity Prayer, the favorite of alcoholics everywhere. Finally she glanced up, maybe feeling the weight of the entire table as they turned their attention to her.

“Could you take an intern?” I liked the term that Ted had used to describe his charges, not typical work-study, but not helper, either. And if they weren’t technically interns, no one cared. As long as there wasn’t trouble.

“I don’t know.” Marie’s eyes darted from one person to the next. “I have several classes coming up this next month and I don’t have time to babysit someone.”

“I bet the intern could help you with your classes. Maybe helping slower students or bringing in supplies, or even setting up the room each day.” My voice sounded excessively chipper, like I was a game show host, describing what was behind door number two if Marie chose to accept our offer.

“That’s a great idea. People love craft projects. Maybe she’ll even sit in on the classes herself.” Darla smiled at Marie. “You’re very generous with your time.”

Marie must have known she was being played. I saw her form a response, then she just sank back into her chair, defeated. “I guess.”

“Great.” I glanced down at my schedule. “Ted’s bringing the gang at five. I’m taking the group on a walking tour of town first, then dropping each person off at their assigned store, where you’ll have about fifteen minutes to get to know each other. Then I’m hosting a small get-together here at the store. Coffee and cheesecake.”

New York Times and USA Today best-selling author, Lynn Cahoon is an Idaho native. If you'd visit the town where she grew up, you'd understand why her mysteries and romance novels focus around the depth and experience of small town life. Currently, she's living in a small historic town on the banks of the Mississippi river where her imagination tends to wander. She lives with her husband and four fur babies.