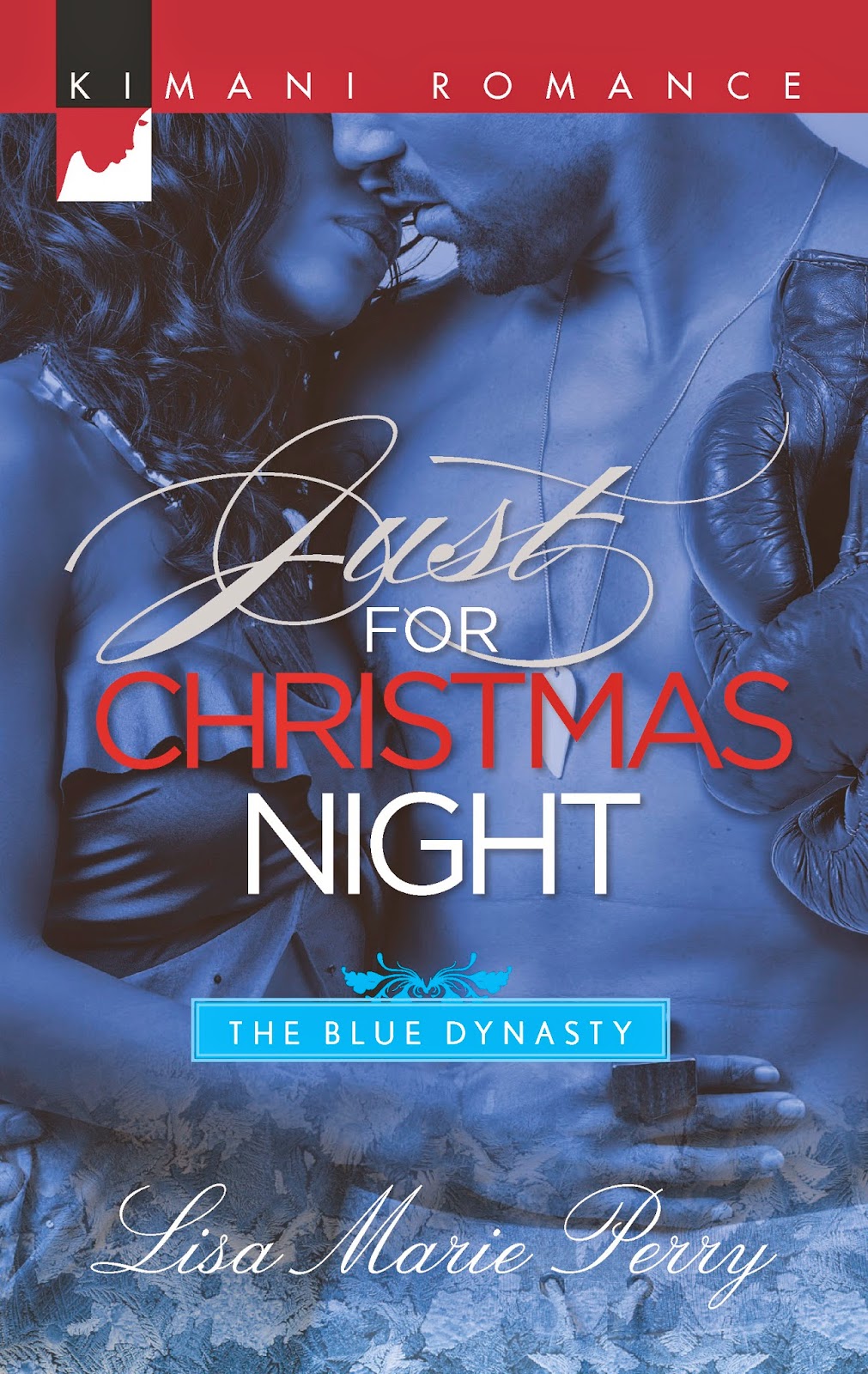 Pro football publicist Martha Blue has something to prove. To protect the image of the Las Vegas Slayers—and stay employed—she has to shed her party-girl reputation. Fast! So no more mistakes. No further scandals. And absolutely no falling for the one man who can give her everything she wants…and nothing of what she needs.

Danger and desire never mixed well for undefeated prizefighter Joaquin Ryder. A friend of the Blue family, he's a man who knows his boundaries…boundaries he has secretly crossed only once before. Now that he's back in Sin City to train for the biggest fight of his career, he can't afford to let a sexy distraction like Martha put him against the ropes. Revisiting their sizzling past is something he isn't willing to risk—until a steamy Yuletide encounter, where for just one night, they'll surrender completely….

The woman was practically in his lap, shackling him to his bar stool with lust.

Joaquin’s first mistake tonight had been to touch her. Dipping his finger into that tear in her jeans. Raking her skin. It had been a purely idiotic thing to do when just the picture of her dancing in the crush had kicked his body into low vibration. If he’d known ahead of time that she’d be here…he might’ve shown up sooner.

Joaquin killed the thought. It had been trying enough to battle his instincts to clear the Foundation Room and finish what Martha had begun. Groaning—letting that control slither through his grasp—had been his second mistake.

He couldn’t allow another. Mistakes indicated disorder. Disorder was interference. Training for the most hyped-up main card fight of his career, he needed to dodge or defeat interference.

Dodge Martha, though? Not likely. Only hours ago she’d warned him of what he’d found to be true when he’d stepped into this room: Las Vegas didn’t harbor enough hiding places. Not for two people who should want to avoid each other, but for whatever reason didn’t. Stacked on top of that was what he’d told Marshall Blue in the ring at Jules’s gym.

I’ll keep her close. She won’t jeopardize your business on my watch. That’s a promise.

Sealed with a grave nod, Joaquin had given his word that he’d deliver. Before he’d fought his way to money and celebrity, the only thing of value he had was his word. A promise from him was a rare thing, but his promises were never offered lightly and were always—always—honored.

Control kept him silent, but the impulse to manipulate that rip in her jeans until he could fit his entire hand inside had him brutally clenching his teeth. If he couldn’t dodge her, then the singular option was to defeat whatever effects she—and her soft hair, luscious frown and trouble-hungry hands—had on him.

“A camera phone click, and anyone can paint a picture of you giving me a lap dance at Mandalay Bay.” Even with a demanding hard-on, he could still be pragmatic. “Does that concern you?”

“Does it concern you that a picture could be painted of you getting a lap dance at Mandalay Bay?” was her casual response. “No, right, because you’d be seen as a man just having a good time. Centuries of struggles, so much social progress, and still a man’s free to celebrate his sexuality when a woman has to downplay hers.”

“Unfair. I didn’t say it wasn’t.” The genuine apprehension in her expression pricked his resolve, dug in where he was defenseless. “Switch places, then, and I’ll give you a lap dance.”

The lights shimmied over her as she rolled her eyes. “Funny, Joaquin. But I like you where you are.” She jerked her body all nice and tight up against him. “Some other things I like? Flirting. Sex. Getting off. I’m turned on right now—so wet, right now—”

“This is you not downplaying your sexuality?” Bold didn’t begin to describe her approach. In public, she was telling him things only a lover should hear…sharing secrets meant for a man who at least deserved her.

He wasn’t that man.

“These are facts. Another fact—I can let you go.”

“Then stop, if that’s what you want to do, Martha.”

“Or…” Her focus drifted down to his lap as her fingers relaxed. “I could come a little closer.” She pushed her hips forward, and damn him, he was urging her, deeply stroking her flesh through tattered denim. “And do this.”

Joaquin didn’t want to give her that, the satisfaction of knowing she could reach him on some level—any level. Yet he let his gaze trip over the image of her thumbs settling on either side of the hard ridge in his pants. She firmly pressed down, moving her thumbs back and forth, further tightening the fabric that his erection was straining beneath.

“I could, Joaquin,” she whispered, “tease you like this until you money-shot in these nice designer pants. Then I could tear you down and demand that you—and I’ll say it again—get off my territory.”

Damn it. He was apologizing for yesterday, but all this catch-and-release teasing, all the pain she was trying to hide, was about what had happened four years ago. That one damaging night. “Screwing with men’s minds—you’ve gotten good at it. Too good.”

Indifferent, she reached over his shoulder for her margarita. “You’re too serious.”

Intercepting her, he wrapped his fingers around her wrist, felt her pulse pound. “Who’re you here with?” When she mumbled something about being on her own time tonight, he pressed, “Drive yourself?”

“Get your phone, take him off call. You and I need to go back to that place.”

“The gym. It’s another cold December night. Key’s in my pocket.”

“So the stage is set for a do-over?” A mocking snort followed. “That’s bewilderingly romantic—for you, anyway.”

“It’s not about being romantic.” He rubbed his thumb over her wrist where her pulse continued to leap quickly, resisting the pressure of his touch. “It’s about taking every measure to get you past what happened.”

“And at the same time get you past your guilt?” Martha shrugged as though she didn’t care, and had the quick beat dancing against his thumb not betrayed her, he might’ve believed it. “Don’t judge me for holding on, when you’re holding on, too.”

Lisa Marie Perry encounters difficult fictional men and women on a daily basis. She writes contemporary romance fiction with plenty of sizzle, energy and depth. Flawed, problematic, damaged characters are welcome. Her tales feature exciting multicultural mash-ups, sexy guy-next-door heroes and powerful larger-than-life alphas who are brought to their knees by the love of complicated women.

According to Lisa Marie, an imagination is a terrible thing to ignore. So is a good cappuccino. After years of college, customer service gigs and a career in caregiving, she at last gave in to buying an espresso machine and writing to her imagination’s desire. She lives in America’s heartland and she has every intention of making the Colorado Mountains her new stomping grounds. She drives a truck, enjoys indie rock, collects Medieval literature, watches too many comedies, has a not-so-secret love for lace and adores rugged men with a little bit of nerd.