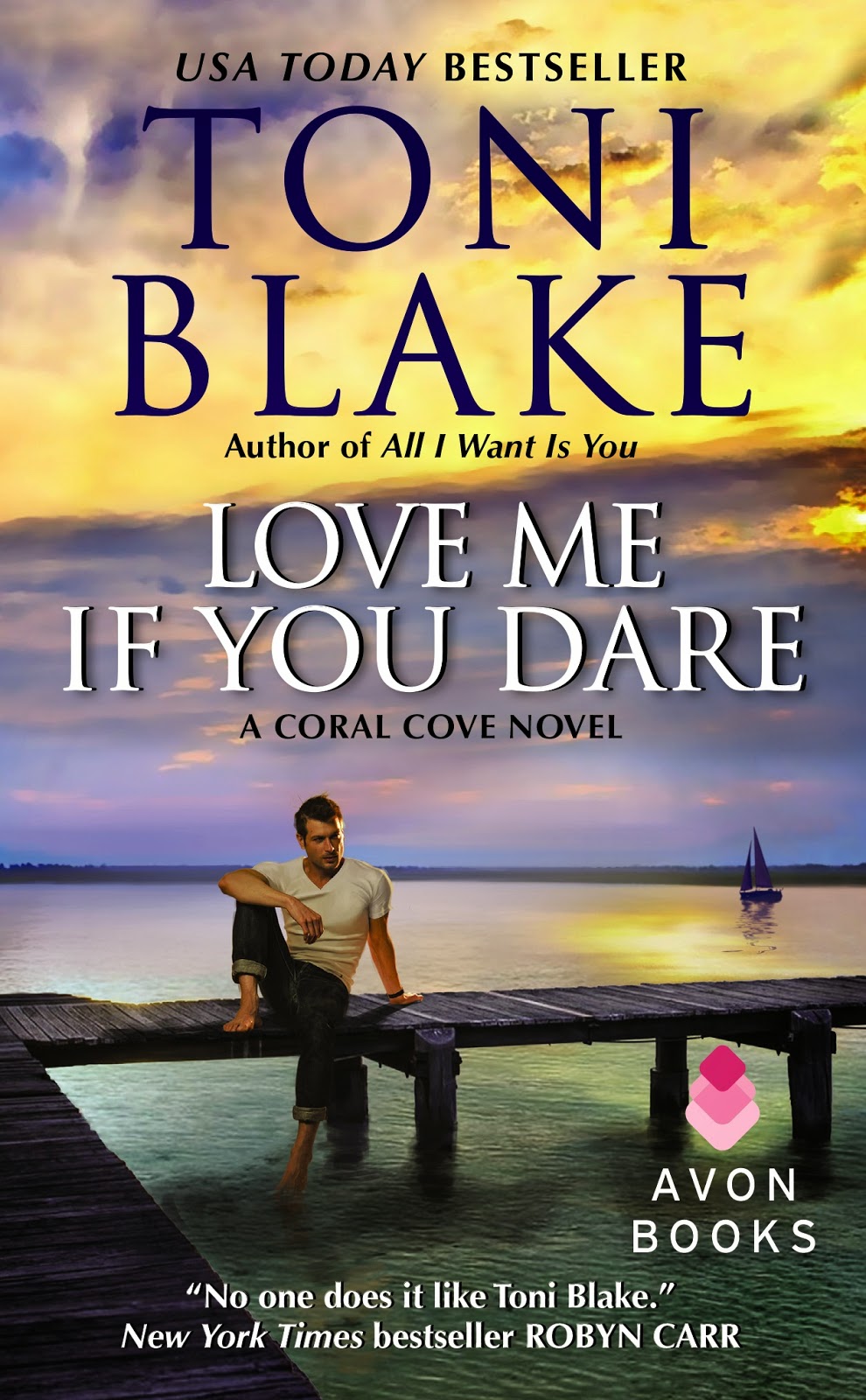 When the question is love, the answer is always yes…

Camille Thompson is the best at what she does-closing deals. That’s why real estate developer Vanderhook has sent her to Coral Cove, Florida, where the stubborn owner of the Happy Crab Motel is refusing to sell. Camille’s never had a problem turning a “no” into a “yes”, but then she’s never been so captivated by a man’s sexy smile before.

Laidback Reece Donovan likes life simple. No amount of money - or any other temptation Camille can offer - will convince him to give up the one link to his past. Of course, it would be easier without the powerful chemistry raging between them.

As a fragile romance begins to grow, can Reece trust Camille with his secrets? And when promises are broken, along with hearts, can the charm of Coral Cove help bring them back together?

Reece balked, taking in the sight before him. If he’d been drinking, he’d think he was seeing things. But since he was completely sober, he had no choice but to conclude that the stiff, starched, manipulative woman who’d tried to wheedle him out of his motel a few minutes ago was now standing on a bed in Room 11 wearing nothing but a towel and looking a little crazy.

“What the hell’s going on in here? Were you screaming? What happened?”

Stark terror shone in her blue eyes as she pointed toward the bathroom. “It’s in there!” she said. Which wasn’t exactly the helpful explanation he’d been hoping for.

He just blinked his confusion. “What’s in where?”

She shook her head nervously, her eyes still filled with fright. “I don’t know what the hell it is, but it’s in my tub! It’s – it’s … a dinosaur or something!”

Reece narrowed his eyes. He was pretty sure there wasn’t a dinosaur in her tub. But he strode into the bathroom, glanced down, and – oh, now he understood.

Riley had finished some plumbing work in this very room earlier – that was why Reece had given it to her; he’d known nothing would leak or dribble. And apparently Riley had had some company while he worked.

Stepping back out of the bathroom, Reece glanced back toward the panicked, naked woman on the bed and gave her a quick grin. “That’s not a dinosaur. It’s just

The naked woman squinted down at him. “Fifi?”

Now it was she who blinked and looked confused. “Your giant what?”

“I-gua-na,” he said, enunciating each syllable in case she was hard of hearing or something.

She continued to appear horrified. “You have an iguana? They come that big? Why would you have such a thing?”

He didn’t bother hiding his amusement. She didn’t seem nearly as tough as she’d claimed back in his office, or even as tough as she’d actually seemed. “Yep. And that’s why it’s called a giant iguana – because it’s giant. And she’s a pet.”

Despite the clear answers he’d given, she still looked completely perplexed, her mouth open in the shape of a perfect ‘o’. “A pet,” she repeated dryly.

He shrugged. “Different strokes.” Then he glanced back into the bathroom. Fifi was agitated, hissing and swishing her tail. No wonder, with all that screaming. He spoke in a soothing voice to say, “It’s all right, girl, everything’s okay. Nobody’s gonna hurt you.” After which he glanced back to Cami – a name which, frankly, he thought suited her much more than Camille. Especially when she was naked. “You scared her,” he accused.

Cami’s eyes flew wide. “I scared her?” Then she shook her head. “What on

earth is it doing in my room?”

This woman was earning no points with him by calling Fifi ‘it’. “She must have gotten locked in when some work was being done in here this morning,” he explained. “Happens occasionally and I have to go looking for her. Sorry about that.” Though it was hard to keep a straight face for the last part since he wasn’t really sorry at all. For a normal guest, he’d have been sorry – but for this one, he actually thought it was pretty damn funny. As long as Fifi didn’t end up too traumatized.

“I’m as sorry as I can be,” he told her, which was the truth. He just couldn’t be very sorry at the moment. Then he raised his eyebrows to add, “You can come down off the bed now.”

The towel covered way more than any bikini, but it was still sexy as hell. And part of him didn’t want to think a piranha like her could be sexy – but on the other hand, sexy was sexy and what guy was immune to it?

Back in the office, he’d known she was an attractive, confident woman with a pretty face and a shapely body. But now he was seeing … more of her. And not just skin. Now he was seeing that she was … human. And human plus attractive … somehow he couldn’t stop seeing the sexiness now. Even if he thought she’d blown the Fifi thing out of proportion.

As she stepped toward the edge of the bed and he held out his hand to help her down, his gaze dropped to the creamy round curves swelling from the top edge of the terrycloth and he couldn’t help thinking his seafoam green guest towels had never looked quite so hot before.

After reaching the floor, she clearly realized where he was looking and drew back her hand with a gasp.

“But you burst in without even knocking,” she accused.

“You screamed. Don’t scream if you don’t want somebody to burst in.”

She let out a small harrumph, apparently conceding the point – or at least unable to invent a comeback.

“I thought there was actually something wrong,” he went on, suddenly feeling a little indignant. Given the racket she’d made, he’d been envisioning something like an intruder, or fire.

“Something was wrong,” she insisted.

“Yeah,” he said, not trying to hide his sarcasm, “my dinosaur was in your bathtub.” He took a couple of steps back in that direction, glancing toward the iguana to say softly, “Come on, Fifi Girl. Come on outta there and let’s go.” Then he made the little kissy sound she often responded to and watched as she began to climb slowly out of the tub, calmer now than when he’d first arrived. “Good girl.”

Cami took a few tense steps back as Fifi followed him out into the room,

“She’s harmless,” he promised. “For a dinosaur.” He quirked an amused grin her way.

She didn’t smile back. He returned his glanced to Fifi, who was admittedly a slow mover, as she followed him toward the door, speaking to her in a playful voice. “She thought you were a dinosaur, Feefe.” Then he looked to Cami and lifted his hands into monsterlike claws and said, “Rawr!”

And he let out a laugh.

And she made a mean face at him, which he just ignored.

“Stop,” he said, holding up one hand, palm facing her. “Not gonna happen.”

And to his pleasant surprise, she actually stayed quiet. Probably worn out from the big dinosaur scare.

As he and Fifi reached the door, he looked back a final time to say, “Have a nice night, Cami.”

“My name is Camille,” she pointed out once again.

But he only shrugged. “You say tomato,” he replied, then cheerfully whistled the tomato-tomahto song as he waited for Fifi to amble out behind him, then shut the door and walked away.

USA Today bestselling author Toni Blake’s love of writing began when she won an essay contest in the fifth grade. Soon after, she penned her first novel - nineteen notebook pages long. Since then, Toni has become a RITA-nominated author of more than twenty contemporary romance novels, her books have received the National Readers Choice Award and the Bookseller’s Best Award, and her work has been excerpted in Cosmo. Toni lives in the Midwest and enjoys traveling, crafts, and spending time outdoors. Learn more about Toni and her books at www.toniblake.com.