Review & Excerpt from Meet Me at the Beach (Seashell Bay #1) by V.K. Sykes 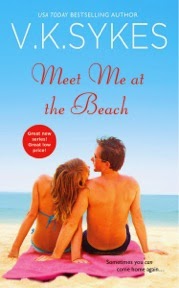 "Have you forgotten how much you loved it when I touched you?" - Aiden Flynn

YOU CAN’T STOP A RISING TIDE

When Lily Doyle spots her high school crush Aiden Flynn on the inbound ferry, she knows trouble is about to dock in Seashell Bay. And not just because he’s more handsome than ever. If Aiden’s in town, the rumors must be true about his family’s plan to sell their coastal land to the highest bidder. But Lily will do whatever it takes to convince the hottest guy on the beach to protect their idyllic island home.

Gorgeous Lily Doyle was the only thing Aiden missed after he escaped from his hometown to play pro baseball. Now all Aiden wants is to wrap up the business deal and get back to his life, not relive a past that still haunts him. But as memories rush in about the night of passion he and Lily shared long ago, everything else washes right out to sea-everything except the desire that still burns between them.

I've been a fan of V.K. Sykes for awhile now (love their Philadelphia Patriots series), so of course I jumped at the chance to read and review their new book, Meet Me at the Beach. I gotta say, they did not disappoint. V.K. has a knack for writing well-developed characters that you can't help but fall in love with. They also have the knack for lovable, yet very sexy, baseball players. Meet Me at the Beach is a second chance romance between Lily and Aiden, two characters from feuding families that come together again during a pivotal time in both of their lives. They spent one glorious night together years ago and it is clear very early on, that the chemistry between them still sizzles. I loved both Lily and Aiden. Lily is incredibly strong and hard-working. Aiden grew up with an abusive father that he truly doesn't understand. Before seeing Lily again, he only remembered the negative memories he has of the small island. As the memories of their one night together comes back to them, the attraction and lust is instantly ignited, but their budding romance builds slowly until they can't fight it anymore.

I adored Meet Me at the Beach. I loved the cast of characters. Lily and Aiden were fantastic, but there is also a group of background characters that I can't wait to get to know better. There is one character whose background I hope is explained further and that is Aiden and Bram's dad. We get to know him a little in Meet Me at the Beach, but there is so much more in his past that I hope gets explored, especially if Bram gets his own book. I'm looking forward to the next book in the series and see what'll happen next.

Sighing, Aiden switched his attention back to Lily, if for no other reason than she was the best-looking thing he’d seen in a very long time. She and her grandmother had obviously come to some sort of silent agreement that resulted in Miss Annie’s ire cooling down. And since Bram was still sitting, the crisis appeared to be averted— for now.

Miss Annie cut Aiden a sharp glance. “You behave yourself, young man. I don’t want any more trouble out of you.”

Before Aiden could protest that he hadn’t done anything, Miss Annie startled him by wrapping her wiry arms around his waist, giving him a tight hug. “It’s good to have you back, boy,” she said, finally letting him go. “I hope you’re planning on staying awhile.”

“Uh, yeah. Awhile,” he said, sounding like a moron.

“Good. Now why don’t you spend some time with my granddaughter? And try to remember that your blessed mama raised you to be a gentleman.”

Miss Annie marched off to the bar, leaving him alone with Lily. Things were definitely looking up, but Aiden couldn’t help feeling he’d stepped into an alternate universe.

“What the hell just happened?”

When Lily tilted her head to look at him, her long hair spilled down her back, exposing her slender shoulders in the sleeveless top. Her skin looked smooth as peach ice cream and just as tasty. Aiden felt every muscle in his body tighten with instinctive, good old-fashioned lust.

“That’s Granny for you,” she said. “Always a little hard to predict, remember?”

“I guess I should be used to that.” He dragged his attention away from her gorgeous body up to her equally gorgeous face. “But I was talking about that thing with the car ferry.”

Lily’s expression turned oddly speculative for a moment, but then she leveled him with a sultry smile that ramped up his lust into the red zone.

“You don’t really want to talk about that right now, do you?” she said in a voice that sounded like it might lead him into a garden of earthly delights.

“Kind of.” Aiden found it both interesting and a bit alarming that she was trying to manage him.

“Really? Because I can think of something a lot more entertaining to do,” she purred.

Okay, maybe he was in favor of a program change after all. He took a step forward, crowding her a bit, letting her know he knew how to play the game too. “What do you have in mind?”

Her lush lips parted in a seductive smile. “How about a game of darts?”