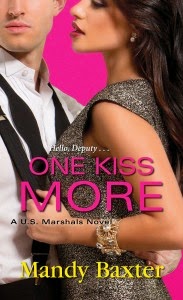 Rough, tough and by the book, he's most criminals' worst nightmare. Until the girl of his dreams is caught on the other side. . .

Emma Ruiz knows her father is innocent. But that doesn't help her convince the law--not even smoking hot U.S. Marshal Landon McCabe. When McCabe bangs on her door demanding information about how her cancer-stricken father escaped from federal prison, she'll have to distract him somehow--it may as well be with a stolen kiss.

Landon gets why Emma isn't saying all she knows. What he doesn't understand is why he's putting his reputation, his case, and his badge on the line for a gorgeous person of interest. Much as he'd love to, he can't let Emma play him. The stakes are higher than either of them can guess. The only way to survive is to trust their instincts. But their instincts want more than one kiss. . .

Landon McCabe could think of a thousand things he’d rather be doing right now. Skydiving, BASE jumping, climbing to the top of Mount Hood would be nice. When did the running of the bulls begin, anyway? Law enforcement was supposed to be an exciting, adrenaline-infused career. Maybe he should have applied for the Marshals’ elite Special Operations Group when he had the chance. Of course, knowing his luck, he’d get an assignment like his friend Galen Kelly had snagged: babysitter to some foreign dignitary for a year. Prestigious? Maybe. But Landon wasn’t interested in recognition or prestige. He was in it for the action. Which was why, as he pulled up to the swanky Aspira building in downtown Seattle, he wished he were jumping out of a plane, thousands of feet from the ground. He hadn’t felt an exhilarating rush of any kind for a long goddamned time. And like any addict, he was itching for a fix.

He pulled his phone out of his pocket and dialed. After a few rings, Galen answered and the fucker had the nerve to sound upbeat. “Hey, man. Did you see me on Anderson Cooper last night?”

Galen had recently come off a case that had landed him not only in the media spotlight, but in bed with the woman he’d been assigned to protect. Lucky bastard. “Yeah. And you know what? It’s true what they say about the camera adding ten pounds. You might want to think about hitting the gym.”

“Please,” Landon scoffed. “I’ve got nothing to be jealous about. You go ahead and be the poster boy for the Marshals Service while the rest of us go out and get shit done.”

Galen’s laughter rumbled through the receiver. Playful hostility was what Landon appreciated most about their friendship. Galen deserved his accolades, though. He was damn good at his job. “Have you questioned Ruiz’s daughter yet?”

The consummate professional, Galen would forego the banter for work talk any day of the week, and as always, Landon was on the same page. “On my way up to her condo now,” he said as he flashed his badge to the parking attendant at the underground garage. The Aspira had top-of-the-line security, which might make it tough to sneak a fugitive in. On the other hand . . . it might also be the perfect place to hide someone from prying eyes. Landon pulled the phone away from his ear long enough to get directions to the public parking and pulled through the levered gate. “I doubt she’s going to be cooperative, though.”

Technically, the Ruiz case was in the Oregon district’s jurisdiction, but since Ruiz’s daughter lived in Seattle, the investigation had become an inter-regional effort. “Ethan Morgan,” Landon replied as he hit the key fob with his thumb and locked his black Chevy Tahoe. He pivoted on a heel as he searched out the elevators and found a bank of silver doors on the far left wall. “I’m meeting him at the office later, but I thought I’d get a jump on Emma first.”

Galen was silent for a moment, and Landon could almost picture the shit-eating grin on his face. “Get a jump on her, huh?”

“Unlike you, I’m a professional,” Landon remarked, as he stepped inside the elevator and hit the button for the twenty-first floor.

“Dude, the French,” Landon said with snort. “So not manly. Later.”

Galen’s answering laughter was the last thing Landon heard as he ended the call. For the past few days, he’d been staking out Emma Ruiz’s building and tracking her every move in the hopes that she’d lead them to her father. But the only thing he’d learned so far in his time on this assignment was that the more things changed, the more they stayed the same. Emma was still a hard-core party girl. She still hung out with pro athletes and rich playboys and lived her life as publicly as she dared, as though she invited the media attention and gossipmongers while simultaneously not giving a shit about any of it.

The Ruiz case had been high profile six years ago when they’d conducted their investigation into the federal judge’s dealings with Mendelson Corp. Once one of the country’s shrewdest and most successful attorneys, and later, the consummate legal hero who defended the little guy, Javier Ruiz had landed a federal judgeship in Oregon after retiring from a firm that dealt primarily in environmental safety and wrongful death suits. His judgeship had taken a nosedive when his dealings with Mendelson had been scrutinized. The U.S. Marshals had gotten involved after he’d dismissed what should have been an open-and-shut FTC trade violation case against the multinational corporation. Through an anonymous tip, the feds had been alerted that Ruiz was extorting money from Mendelson, and the CEO had admitted to paying the judge in exchange for a favorable ruling in their case.

And for the last six years, Emma had been a staunch supporter of her father, declaring his innocence on several national news programs as well as on E! News and in the pages of US Weekly. A first-class celebutante, Emma was often categorized as famous for being famous, or whatever it was the gossip rags said about over-privileged daddy’s girls like her. She had often been whispered about in the Portland office when they’d investigated Javier. At eighteen, she had already been on the road to stop-your-heart gorgeous and had a reputation for playing fast and loose with several pro athletes. She had a mouth on her, not to mention a penchant for fucking with anyone who fucked with her dad. During the course of the Marshals Service’s investigation, she’d made it her life’s ambition to cause any deputy involved in bringing dear old daddy down a world of hurt. Landon’s team had been on the receiving end of several of her malicious pranks including the old potato-in-the-tailpipe routine. That shit wasn’t urban legend, and the blowback from the exhaust had damned near asphyxiated him. Not the best experience for a rookie on his first case.

Watching her over the past couple of weeks had stirred up all sorts of memories. One of those being the euphoric rush he experienced every time he laid eyes on her. Landon couldn’t explain it. He wasn’t usually the sort of guy who got twisted up at the sight of a pretty girl. But Emma was different. Her presence triggered something primal in his subconscious. And that instant, gut-clenching reaction bothered the shit out of him. So, yeah, he wasn’t exactly enthused about paying a visit to the now-twenty-four-year-old Emma, and grilling her about daddy’s whereabouts while he tried not to fall under her spell yet again. Landon was certain that no matter what, Emma was going to give him a run for his money. Paybacks were a bitch.

Mandy Baxter is a part time pet wrangler, a full time sun worshipper, and only goes out into the cold when coerced. She loves black clothes, pink appliances and thinks junk food should be a recognized food group. She lives in rural Idaho with her family.