Review of Centerfold by Kris Norris 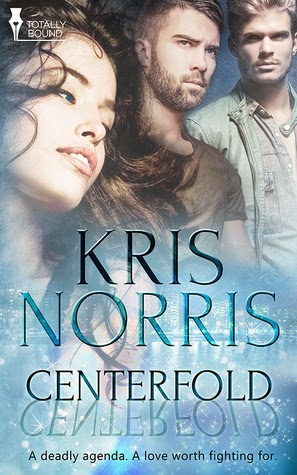 "Tell me...are you this possessive and protective about me?" - Aiden Cross

Detective Scarlet Reid has spent the past three months trying to make her alter ego, Ms. December, a ghost of Christmas past. Forced to become the sexy centerfold in a high-stakes undercover assignment, she’s spent more time pulling copies of her naked butt off the bulletin boards at the precinct than she has collaring criminals—and it’s far from over.

A deadly agenda. A gruesome new case has revealed a disturbing trend—one that has placed Scarlet on a list of possible targets. With limited options, she’s going to have to resurrect Ms. December—and her old partnership—which means facing the one man who stole more than just a kiss.

A love worth fighting for. Federal Agent Roman Kinkaid has some explaining to do. His final assignment with Scarlet changed him, and he’s been running from her ever since. But he’s ready to make things right—only he’s not alone. His partner and lover, Special Agent Aiden Cross, is just as invested and determined as Roman is to claim Scarlet as theirs. And they aren’t taking no for an answer, especially when their souls—and Scarlet’s life—are on the line.

They have three weeks to catch the stalker before Scarlet’s time runs out and they lose their one chance at a happy ending.

Reader Advisory: This book contains scenes of voyeurism and a scene including rough penetration.

Holy cow! For a small little novella, Centerfold sure packed quite a punch! It was sexy, suspenseful, and so much fun to read. I loved the characters. Scarlet is a bad-ass heroine that is quick to take one for the team... Your imagination can run wild with that statement. *wink* I loved how quickly Roman and Aiden surround her and bring her into their relationship. The sexy time scenes were scorching hot and the chemistry between the three of them was off-the-charts. Sizzling hot! Let's push the sex aside for a minute to focus on the suspense element of Centerfold. I was quite surprised with how it played out. It was strong enough to keep my attention and kept me guessing for the most part. For the couple hours I spent inside the world of Centerfold, I was in sexy suspense heaven. I'll definitely be checking out Kris Norris' other works and add them to my TBR.

Author, single mother, slave to chaos—she's a jack-of-all-trades who's constantly looking for her ever elusive clone.

Kris started writing some years back, and it took her a while to realize she wasn't destined for the padded room, and that the voices chattering away in her head were really other characters trying to take shape—and since they weren't telling her to conquer the human race, she went with it. Though she supposes if they had…insert evil laugh.