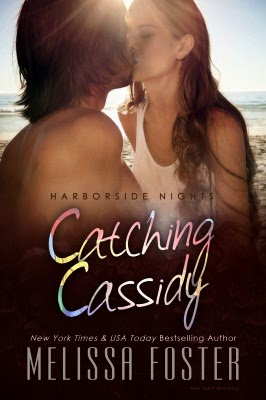 "I don't want power over your life. I just want to be in it." - Wyatt Armstrong

Wyatt Armstrong never imagined that instead of celebrating his college graduation, he and his twin sister would be dealing with the death of their parents.  Then again, Wyatt had never been one to think past tomorrow. He heads to their summer home in Harborside, Massachusetts, with his best friend Cassidy Lowell in tow, to deal with his parents’ death and to try to figure out his next step.

Wow... Another Melissa Foster book that I absolutely loved, but with a twist this time. I have a blossoming love for new adult romances. I don't know what it is about them that I devour, but I can't seem to get enough of them. Is it the angst? What about the raw emotion? Or maybe it is just being able to follow characters that are still trying to figure out life. Now add my love for NA to my love for Melissa Foster and, holy cow, I was in romance heaven, The emotional ride Melissa took me on during Catching Cassidy was unbelievable. The new group of characters that are introduced in this series are lovable, each of them trying to find their way. I fell in love with both Wyatt and Cassidy from the moment I met them. After the death of his parents, Wyatt is left stunned. Suddenly, he's forced to grow up and take over his father's bar. If that wasn't enough, he has also discovered new feelings towards Cassidy, his best friend who might be leaving him at the end of the summer. Not able to deal with losing another person in his life, Wyatt stumbles more times then he probably cares to remember. Cassidy is just as lost as Wyatt. Her heart is leading her one way, but her parents are forcing her in another. It is only when they stop and take a few moments of just being with each other do they find the bravery needed to make their own path in life.

I am so excited to see how Melissa mores forward with the Harborside Nights series. It is quite a departure from her much loved Bradens series, but it is still the same Melissa Foster style that I love. I have a feeling that the next book in the series is going to be a little bit of a challenge for me to read just because it has an element that I've never read in a book, but I am looking forward to seeing Melissa's take on it.

Melissa Foster is an award-winning, International bestselling author. Her books have been recommended by USA Today's book blog, Hagerstown Magazine, The Patriot, and several other print venues. She is the founder of the Women’s Nest, a social and support community for women, the World Literary Café. When she's not writing, Melissa helps authors navigate the publishing industry through her author training programs on Fostering Success. Melissa is also a community builder for the Alliance for Independent Authors. She has been published in Calgary’s Child Magazine, the Huffington Post, and Women Business Owners magazine.