Spotlight & Excerpt from Getting Lucky (Fortune, Colorado #1) by Jennifer Seasons 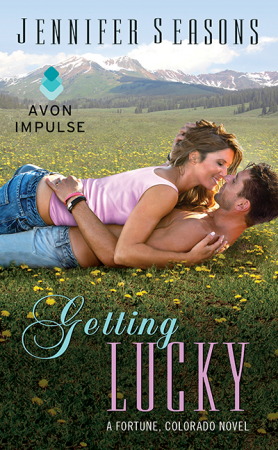 Welcome to Fortune, Colorado—where the air is clean, the men are rugged, and the all the good ones… are bachelors.

Born into the infamous Charlemagne equestrian empire, Shannon has been raised to do whatever it takes for the family business. Even if it means going undercover and digging up dirt on a competitor. It's easy enough when she believes he's a bad guy whose success seems too good to be true. In fact, Shannon's excited to put the aggravatingly sexy Irishman in his place and get back in her father's good graces. All she needs is to stay focused on the goal … and out of Sean Muldoon's arms.

From stealing a thoroughbred racehorse from the Irish mob to striking gold in the mountains of Colorado, there's little Sean hasn't experienced. But when it comes to resisting his hot new stable manager, he's out of luck. With the mob hot on his heels, keeping Shannon off their radar is all but impossible, and he's not about to put her in danger too. Sean wants Shannon, but how can he offer her a future … when he can't even guarantee tomorrow?

“Be prepared to use the ladies.”  Her sister pointed at her chest.

Shannon Charlemagne released a groan and bit her tongue, her patience already on the verge of deserting her. Her sister’s rather unhelpful suggestion about her breasts at this particular moment had that patience packing its bags and furiously scribbling a Dear John letter on a sticky note.

The crap her family put her through.

Pushing away from the hood of the rental car she’d been sitting on, Shannon glanced at the entrance to a horse ranch in the mountains outside Fortune, Colorado, and sighed heavily. Where would she be without her patience? It was her armor, her protection. Losing it would be worse than being thrown to a bunch of wild jackals with bacon-wrapped sausages strung around her head like a Christmas wreath. And with the insanity she was about to fling herself into, she needed it more than ever. Not for the first time, she wondered how she’d been roped into such a stupid situation.

Oh, that’s right, because she could never really put her foot down and say no when it mattered.
If she had a dime for every time her family obligated her to something against her will, she’d be richer than Oprah and living it up on Martinique with a French cabana boy named Pierre.

Sometimes she really wished she were part of a nice, average, normal family. One where there weren’t so many expectations to live up to the legacy that was her family birthright. So much pressure to conform. She was a Charlemagne—the oldest and most prestigious family in all of American horseracing. The most renowned and well-respected family in the industry.

Yeah, it was like that. She was one of those Charlemagnes.

Which ultimately meant that, as much as she balked (which wasn’t as much as she’d prefer, granted), deep down she was a good girl who was loyal to a fault and never went against her father. No matter how overbearing and authoritative he might be. She understood her duties and responsibilities to the Charlemagne name.

Sighing again, Shannon pushed back a clump of her light auburn hair that had fallen loose from the braid she’d hastily made that morning and resigned herself to her ill-conceived fate. Her father had asked her to do this. Good idea or bad, it didn’t matter. He’d said it was important for the family—crucial even.

And that’s why, even though she disagreed with pretty much every aspect of his request, she was currently standing on a gravel road in the Colorado mountains about to do something not entirely on the up-and-up. She and her sister were squinting against the brilliant afternoon sun as they gave the plan one last run-through before she set off alone into the great unknown.

Still, there were limits to what she was willing to do, family or not.

“Why does everything always have to be about sex with you?” Shannon asked. She pointed a finger at her breasts, giving her sister a slight frown. “You know these ladies only come out for very special occasions. They’re highly selective. And this, shall we say, undercover job I’m about to partake in, certainly doesn’t qualify.”

“Does too,” Colleen scoffed. “Your boobs come out far too infrequently, if you ask my opinion,” her sister added, somehow managing simultaneously to sound both affronted and amused. Colleen didn’t usually wait for anyone to ask her thoughts. She just spoke her mind. Whether or not her opinion was wanted was, often, a toss-up.

“Because I’m practically a doctor? As an upcoming graduate of Harvard Medical School, it’s my almost-professional opinion that you don’t have nearly enough sex.”

Shannon laughed outright at that. There her little sister went saying crazy things again. “Thank you so much for caring about my love life and well-being, but I think I’ll be fine.”

Jennifer Seasons has been a lifelong writer and reader. She lives with her husband and four children in the mountains of rural New England. An enormous yet lovable dog and the world's coolest cat keep them company. When she's not writing, she loves spending time with her family outdoors exploring her beautiful new home state, learning the joys of organic gardening, and—if she's lucky—relaxing in her hammock under the trees with a really good book.