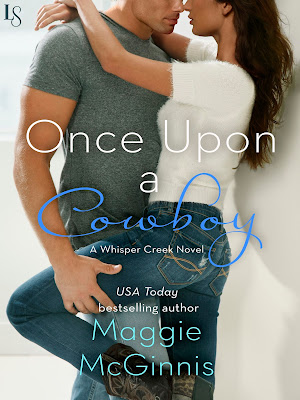 Once Upon a Cowboy
Whisper Creek # 1
Maggie McGinnis
June 30, 2015
Loveswept

In this sexy Whisper Creek romance for readers of Kristan Higgins, Susan Mallery, and Molly O’Keefe, a red-hot cowboy uses some Montana magic to give a reclusive beauty her happily ever after.

Yoga instructor Jessalyn Alcott radiates peace, calm, and serenity—on the outside. Inside, she still feels like the broken, desperate girl from the trailer park. She’s got dark secrets she can’t share, which is why she never lets her relationships go beyond the third date. But when she travels to the Whisper Creek dude ranch for a friend’s wedding, Jess is enchanted by a cowboy whose deep blue eyes, dimpled smile, and rock-hard body make it tough to remember why she keeps running scared.

Cole Driscoll has struggled to find his place on a family ranch where he’s always played second fiddle. His future might be uncertain, but he’s sure of one thing: He wants Jess by his side. Easier said than done. When it comes to getting close, she’s full of excuses, and he longs to fix the hurt he sees in her eyes. Now that she’s at Whisper Creek, there’s nothing he wants more than to break down the walls around her heart and heal her pain with the power of love.

“Okay, look to your left.” Kyla pointed toward the stable as she adjusted her camera later that afternoon. “And stop growling at me. Grumpy cowboys do not sell calendars, Cole.”

“Don’t they have models who do this kind of thing?”

“Yes, but they’re not authentic. You guys are the real deal.”

Cole raised his eyebrows. “The real deal is sweat and dirt and stink.”

“We’re going for pseudo real deal, then. Dirt and stink don’t sell calendars, either.” She motioned at him again. “Lift the brim of your hat up a little, okay? Your eyes are in shadow.”

He raised his hat the obligatory half-inch, and of course as he did, Decker strolled out of the barn.
“Lookin’ good, Cole. Gonna get a little scratchy with those buttons undone, though, don’t you think?”

“Shut up, Decker. Don’t get any horse shit on those fancy shoes.” He looked toward Kyla. “Are we done here yet?”

“I was actually hoping to get a few more in the—”

“Sorry. Union rules. I can only be photographed for an hour a day.”

Cole started doing up his buttons. “I have work to do, Kyla. Go play shutterbug with
somebody else for a while, wouldja?”

Christ. Stupid calendar. Real cowboys didn’t run around with their shirts open, aiming for the best light so their eyes wouldn’t be in—shadow. He shivered. At least she hadn’t suggested waxing.

“You could do worse, you know.” Decker grinned as he watched Kyla walk back up to the main lodge. “Maybe she can post those pics online or something. Might help you get a date for Daniel and Hayley’s wedding.”

Cole executed a middle-finger salute, then leaned down to pick up a rope Kyla’d insisted on using for a prop. “Don’t need a date. We have any early guests coming in today so I can be very, very busy next time she comes around with that damn camera?”

“Trying to make like you forgot? I’ll pretend I haven’t seen you check your watch about eighty times today.” Decker laughed. “Gonna get up the nerve to actually take her out while she’s here this time?”

“I’ve got plenty of nerve.”

“Right. She’s been out here three times now, and every single time, you’re like a parched man looking at a desert mirage, but—”

Decker eyed him in that way he had, the look that stripped the lies right off your face and made you tell the truth whether you wanted to or not. “I don’t know. Word in the bunkhouse is that your rep in town is getting a little rusty.”

“I’m not—rusty. And we don’t have a damn bunkhouse.”

“Want to know what I think?”

“I think ever since you met Jess, you can’t help but compare everybody to her. And nobody quite measures up.”

“Well, true or not, she’ll be here by dinnertime. Kyla’s leaving for the airport in a while to get her.”

Cole rolled his eyes. It wasn’t like he’d been counting the days or anything. Not like he’d gotten a haircut yesterday or had thoroughly checked out Jess’s cabin this morning to be sure it was shipshape and ready for her.

He shook his head, trying to get visions of Jess’s long dark hair and deep brown eyes out of his brain. “I’m still trying to wrap my head around Daniel and Hayley getting married in a week. I feel like we live and breathe weddings around here these days.”

“I suppose that means we’d better finish the spa so she can start selling the packages.” Cole shook his head. How in the world had their working ranch become a wedding-slash-spa-slash- getaway place? “Your woman makes a hell of a lot of work for us, you know.”

Decker laughed. “She makes a hell of a lot of money for us, too. I think the only reason she’s not haranguing us to get the spa done is she’s hoping Jess will help with the design. I have a feeling she’s going to dangle it out as a carrot to get Jess to stay out here.”

“Yep.” Decker nodded. “She’s been planting seeds for months. Getting Hayley to move to Montana got her all puffed up about her abilities. Now she’s turned her sights on Jess.”

“Pretty sure she can handle herself.” Decker tossed a beaten-up leather briefcase into the cab of his truck. “I gotta go charm the home buyers. Hold down the fort.”

As Decker headed out the driveway, Cole turned up the hill toward the new lodge, half of which was Whisper Creek’s new childcare facility and petting zoo. The other half was still rough-framed inside, but by fall was supposed to be ready for duty as a full-service spa.

He strolled toward the building, letting himself in the spa door. He inhaled, loving the scent of fresh lumber and drywall putty. Decker was the acknowledged brainiac of the family, working with his design software for half the night, but Cole preferred to be the guy with his hands right in the mud—literally.

Morning sun came through the east-facing windows and skylights, and he tried to picture what the spa would look like once it was finished. They had fifteen hundred square feet to work with, which might be an architect’s dream—if the architect was ever at the ranch long enough to figure out what to do with all this emptiness. Cole sure didn’t have a clue.

But then he pictured Jess in the warmly lit space, gliding around with one of her yoga outfits on, flashing her warm smile his way, tying up that long, long dark hair into a ponytail he’d just itch to take back down.

He shook his head, trying to erase the vision. Fantasizing about Jess before she even got here was only going to torture him more.

And her kind of torture was the kind that only left a man wanting what he could not have. 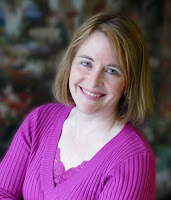 Maggie McGinnis, USA Today Bestselling Author of Accidental Cowgirl and Driving Without a License, which was a finalist for Romance Writers of America’s Golden Heart Award is a former high school English teacher, an accomplished musician, and a certified black belt, who lives in New England with her family.