Review of My Obsession (Club Desire #1) by Cassie Ryan 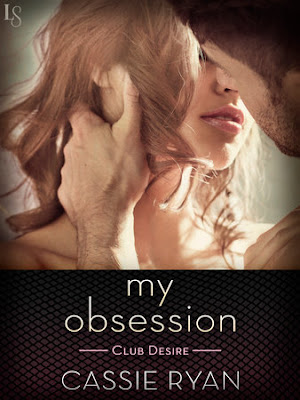 "Do you trust me to take care of you, Sandra?" - Brent Weston

In this story of temptation and total surrender for readers of Sylvia Day and J. Kenner, a powerful master gives his dream girl a new beginning in the dungeons of decadent ecstasy.

As a teenager, Brent Weston was a nerd. Now he owns the hottest dungeon in Phoenix, enjoying the power and success he’s always craved. All that’s missing is the right woman to share it with. Then one day Sandra, his secret high school crush, walks into his club. She’s just as beautiful as he remembers. She’s also scared as hell. Brent has been waiting for this moment, and now that Sandra’s in his sights, he’ll do anything to protect her, pleasure her—and prove that he’s the only master worthy of her devotion.

My Obsession is a sizzling and sexy second chance romance with a dash of kink and a side of suspense. Phew, that was quite a mouthful... No pun intended. ;)

Romance - At the core, My Obsession was a slow building second chance romance between Sandra and Brent. Unbeknownst to Sandra, their paths actually crossed years before she stepped into Club Desire. The initial attraction between the two was sizzling, but it was the slowness of their relationship that sparked my interest. I loved that although there is a bit of insta-lust, it took time for them to get to know each other again before taking their relationship to the next step.

Cassie Ryan (aka Tina Gerow) started her career writing steamy paranormal romance under another pen name. However, when one of her critique partners suggested she try her hand at contemporary romance, she gave it a shot—and Cassie Ryan was officially born. She lives in Phoenix, Arizona, and besides being a write-a-holic, is a frequent speaker on several writing and motivational topics.