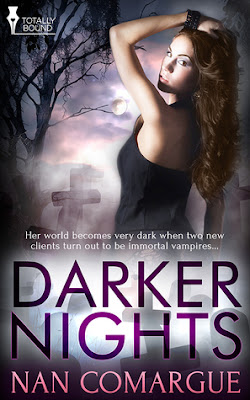 Delia Darker works at her family’s law firm, serving vampires and other immortals, but she has long ago gotten over her own lust for vampire males after being hurt and abandoned by one. When her colleague forces her to take over a meeting with two of his clients, she’s suddenly thrown into the night-time world of music, partying and incredible sex. How can she resist spending the night with Mark Lyons and Caleb Jennings?

Caleb has been searching for his and Mark’s one true mate, the ideal match prophesized for immortals. However, Mark is skeptical. Immortality just doesn’t seem to go with a committed long-term relationship. It doesn’t matter how attractive Delia is, he just doesn’t think it’s going to work—but he’s willing to give it a try for his best friend’s sake.

When that first wild night turns into a series of sexy encounters, Delia starts worrying that she might be falling for Mark and Caleb—and that certainly wasn’t the plan. She isn’t sure she wants to become an immortal. Sleeping with both a vampire and a werewolf might be a crazy experiment that’s all right for a little while, but the two males couldn’t want more than that, could they?

Publisher's Note: This story has been previously released as part of the Wild After Dark anthology by Totally Bound Publishing.

Nan Comargue's short story Darker Nights is a sexy and erotic paranormal romance between Delia and her two immortal clients, Mark and Caleb. For reasons unknown, I don't read a lot of paranormal romances. When I do want to pick one up, I tend to gravitate towards novellas and short stories. Darker Nights was the perfect length to feed my PNR craving. Nan gave just the right amount of Delia's previous vampire encounter to reveal her lust for them. I loved how determined Mark and Caleb were to claim her as their mate, even with her not wanting to become an immortal herself. If anything, I would have liked more interactions between the three of them, but honestly, I thought everything about Darker Nights was fantastic.

"This business is all about repeat clients," Delia’s father had once told her, and she’d realized this was true the first time she’d handled a vampire divorce case.

The vampires were wealthy—all of them. At least, all of the ones who got divorced. It was a function of interest rates and the upward trend of the stock markets. Her father again. Except Delia couldn’t quite believe that the restless, beautiful creatures who came to see her at the office checked their margin accounts or even knew what a margin account was. Even less could she picture them once poring over newspapers or ticker tape.

They were too modern. Relentlessly so. A vampire never wore last year’s fashions, much less stuff from the eighties or nineties. It was almost as if they tried to hide their immortality in the styles of the day.

Her new client, Rosa Linden, was dressed in haute couture. More incredibly, she managed to pull it off, as so many wealthy women were unable to. It helped that her body would have made a supermodel weep in envy.

That was the only way a normal woman could get such a body, Delia reflected with a healthy dose of self-mockery—to never eat. To never have to eat. Delia didn’t think she could give up the pistachio macaroons from La Table, even for the black-and-white graphic sheath Rosa Linden was wearing, which must have cost what Delia made in a month. She would rather her boring gray suit—and the macaroons.

Rosa made Delia nervous and she seemed to know it, if the half-smile etched on her exquisite face was any indication.

Actually her father was in respite care for his advanced stomach cancer but she didn’t see the need to tell her client. Vampires exhibited two reactions to the subject of death—relish or pity. Delia wasn’t in the mood to deal with either.

“He was such a good lawyer,” Rosa said, as if she knew exactly where he was and figured it was the equivalent of actual death. “He handled my last two divorces and my takeover of my ex-husband’s company. Do you practice corporate law as well?”

Delia looked up from the figures on her computer screen, figures that were making no sense. “What? No, I don’t do corporate.”

Rosa nodded with that same irritating suggestion of having known the answer beforehand. “No, I can’t imagine it would suit you, not like it suits your colleague.”

Delia had more than a dozen colleagues, but she immediately knew which one Rosa meant. To the female patrons, there was only one who mattered.

God’s gift to women. Young and old. Mortal and immortal.

“Henry is competent in a lot of areas,” Delia agreed, meaning to point out that her own specialty was the exact type of law Rosa seemed to require most often.

“Indeed, he is,” Rosa murmured with another half-smile. “I’m just wondering how you would possibly know.”

Her bright stare moved over Delia just slowly enough to be insulting.

Delia felt her face color but she did not give way to her first instinct, which was to meet rudeness with rudeness. She was too much a professional. The blood running through her veins was shot through with lawyerly caution, several generations of it, and that caution told her never to insult a customer—no matter how aggravating they could be.

“Are you afraid of all your clients? Or just the vampires?”

Afraid? What a thought. Delia wasn’t afraid of vampires. She was turned on by them.

But she couldn’t exactly share that fact with the other woman, now could she?

Delia ignored the taunting questions and somehow made it through the rest of the meeting, but inwardly she was tumbling back years into the past to her first real interaction with a vampire.

Nan blogs about her writing journey and other interesting topics (zombies!) here.

Nan is Canadian, eh? So naturally she's written a contemporary romance with a professional hockey player as the hero (and a librarian as the heroine).