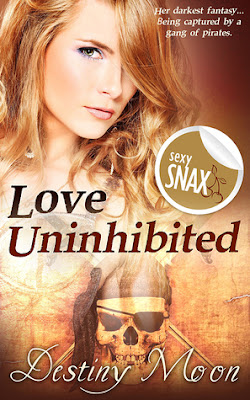 "I can't wait to find out what else you haven't done, because there's so much I want to do with you." - Hunter

Buy Links: Amazon - B&N - Totally Bound
*General release date for this title is October 20, 2015. Until then, Love Uninhibited will only be available on Totally Bound's website. Amazon and B&N links coming soon.
Add to Goodreads

When Maya admits her darkest fantasy of being captured by a gang of pirates and forced to surrender, Hunter makes her dream come true.

Every woman has fantasies, but Maya is new to even talking about them, let alone acting on them. A divorcée from Utah, she breaks free from her repressive past when she moves to Boston on a whim. Starting a new life as a single woman in a big city is a challenge, but for someone who was taught that sexual desires were wrong, it is particularly hard. When Hunter, a charming co-worker, wants to date her, she must face her worst fear—that she’s just not ready for a ‘normal’ relationship.

However, Maya’s attraction to and trust in Hunter eventually pays off. To her own surprise, she finds herself revealing the truth to him. Though she expects judgment, she is met with enthusiasm. Hunter wants to satisfy her deepest darkest longing—to be captured by a gang of pirates and forced to surrender to them. In Hunter she finds a man capable of making her dream come true, but is she ready for the reality of group sex? And is Hunter ready to share his girlfriend with a bunch of other men?

If you ask a romance reader to describe their ideal book boyfriend, one of the answers I love most is that he is flawed. Whether it is his personality or something physical, we are starting to gravitate more towards the imperfect, but lovable heroes. Yes, he is typically still hot as sin, but there is something more, something deeper that draws us and the heroine towards him. In Destiny Moon's Love Uninhibited, Hunter isn't perfect. As Maya would say, he's no Brad Pitt. But you know what? He's still so damn lovable and courageous in his own right, that you can't help but fall for him. I mean, how many men out there would be okay with other men touching his girlfriend to fulfill her deepest fantasy? He wants nothing more than to make her happy. Granted, he sure does enjoy himself... Maya is flawed in her own way. Broken from a previous relationship, she's learned to hide her desires. Maya wants more, but is scared to open herself and find it. Kudos, Destiny, for creating characters that are not "perfect," especially Hunter. I loved him. However, I do wish Love Uninhibited was just a tad longer because I would have liked to follow more of their relationship, especially when they were just starting to get to know each other. Other than that, Love Uninhibited was a quick, romantic read with sexy hints of dominance and sizzling fantasies.

When I first saw Hunter, I thought he was the cutest. His face put me at ease. It wouldn’t be right to call him ruggedly handsome like Pierce Brosnan or anything, but I’d never know how to talk to a guy like that anyway. I could barely talk to Hunter, who was a slightly balding, hairy guy with a tendency to wear T-shirts with logos or sayings like ‘Dessert is Cheaper than Therapy’.

“You’re new,” he said, passing my desk. I wasn’t used to talking to men at all and was doubtful of everyone in the big city of Boston.

I touched them. “Thanks. They belonged to my grandmother.”

He smiled and walked on. Whenever he passed my desk, I squirmed.

Everything in the city was exciting and different. I had my own little room in a shared house just a fifteen-minute walk from the office. It was not where I expected to be at age twenty-six, but life was full of surprises. There were restaurants everywhere with all kinds of food imaginable, and I was surprised to find that I was even kind of fashionable in my own way. I’d gotten accustomed to sewing my own clothes back home and here women stopped me on the streets.

“Where’d you get that gorgeous retro dress?” one lady asked.

I showed off my A-frame hem. “This old thing? I made it.”

“No way!” she said. “You should start your own business.”

“Are you kidding? I will. I’ll be your first customer.”

So that was how I came to know Dalia, who became my first friend since I’d left Utah and my old married life behind. Dalia came over for tea on Sundays, took me to the movies and even talked about that dreaded topic—men.

“Are you seeing anyone yet?” she asked one weekend.

I shook my head. “There’s this one guy at work, but he only talks to me for a minute at a time.”

“I could never do that.”

“Maya, you’re going to have to do something sooner or later. You’re way too awesome to be a spinster forever.”

“A divorcée,” I corrected. “Nothing wrong with being single.”

“I know there’s nothing wrong with it, but don’t you want the thrill of a new lover? The swoon of being in a man’s arms again?”

She sounded so enthusiastic I felt myself blush. “I don’t know if they’re worth the trouble.”

“Don’t you sometimes picture yourself in his embrace?”

“Well, yeah,” I capitulated. I did. I also dreamed about him. Every now and then, I’d find myself daydreaming about what it’d be like to fall asleep in his arms or wake up to him. I wondered what his place looked like and whether he had a girlfriend or wife.

Romance heroines have saved my sanity numerous times through break-ups and life changes. I find escaping into a romance both soothing and revitalizing—and even better when there are some steamy scenes to tantalize the imagination.

For most of my adult life, I’ve concentrated on carving out a serious career, but a number of love-hungry, sassy characters keep taking over my mind, insisting that I daydream, live vicariously through them and tell their stories. Watching these women emerge on the page gives me a different sort of satisfaction than I get from my day job. It is a joy to share them with readers.

I live in a tiny apartment in a crowded city and I like to think there is something romantic about this. I did manage to find my soul mate here.