A visit with SA Laybourn, author of A Kestrel Rising 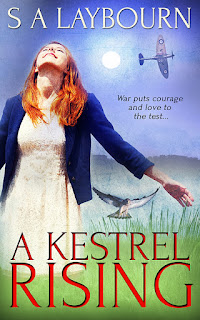 Please join me in welcoming author SA Laybourn as she continues on her blog tour to celebrate the release of her new book - A Kestrel Rising - from Totally Bound.

World War Two wasn’t just about fighting the enemy directly. While many British men joined the Army, RAF, Navy and other military branches, those left behind on the home front had their roles to play as well. Women, in particular found themselves engaged in occupations they may not even have imagined before broke out. My late mother-in-law—a tiny little woman—became a crane operator on the docks. This lofty position was also quite dangerous given that docks were a prime target for enemy air raids. My mother-in-law from my previous marriage joined the Women’s Royal Army Corps and, because of her immaculate handwriting, was given the heart-breaking task of writing the letters informing families of the loss of a loved one in action.  There were so many roles, once undertaken by men that women found themselves doing.

Women also became factory workers, labouring on assembly lines to build planes, engines, tanks, guns. They worked on farms as part of the Land Army. Flew planes from factories to airfields, worked in canteens, operations rooms, offices, just about everywhere. The war set women free from their traditional roles and put them out into a brave new world.

I obviously wanted my main character, Ilona, to have a job that would enable her to meet her first love. I wanted it to be a job that perhaps I would’ve been able to do had I been in her shoes. The most obvious choice was as a driver for the RAF. The first draft of A Kestrel Rising included a chapter about her training at a cold, damp camp in North Wales. It was one of those things that didn’t survive the cull on the grounds that it was more information than plot. It was a little sad to let it go as I’d based a very unpleasant officer on someone I was working with at the time. Being a driver meant that Ilona could go from ferrying pilots around a large operational airfield to delivering engine parts to air bases around North Yorkshire or East Anglia. It also meant that it was easy for me to make sure she was in the right place when she needed to be. It also gave her a real understanding of the danger the man she loved faced every day and a front row seat.

After the war women were demobilised from their jobs. Luckily, because of the economic growth and reconstruction, there were more employment opportunities than there had been after the first World War.  The British government launched campaigns to encourage women to work. However, the jobs on offer, while plentiful, tended to be regarded as ‘women’s work’—nursing, midwives, clerical and secretarial and assembly work. So, for many women, life after the war, though peaceful, was probably a bit of a let-down.

It was great fun to try and put myself in Ilona’s shoes. Had I been in her place at the start of the war, I know I would’ve loved a job like hers.

Ilona shivered when she climbed out of the lorry. Even in spring, Newmarket Heath could be an inhospitable place when the wind swept down from the north. One of the ground crew told her that it was cold because there was nothing between Newmarket and Russia to stop it. It brought the chill of the North Sea and the Wash. This day in March was no exception. She hurried into the depot to tell the sergeant that the parts had arrived from Mildenhall then went to claim her cup of tea and sandwich, the custom on those days when she had deliveries.

“How are you today, ACW Lowe?” the sergeant asked when Ilona sank into a chair and took a sip of hot, milky tea.

“I’m fine thank you, Sergeant Nash, sir.” She always liked the drive to Newmarket, across the open Brecks under the broad East Anglian sky. There were no high green hills, only an unrelenting, flat landscape which stretched far to the north across the Fens. It had taken her a while to get used to the flatness, but she welcomed the change. It had been a long, hard and cold six months and she was glad that Mildenhall was a busy base, at the heart of a multitude of smaller airfields that needed deliveries. She had little time to mourn and wondered whether that was the reason she had been posted there, because some kind soul at Catterick had suggested that she needed to be kept occupied.

“Are they keeping you busy?”

“Good lass.” He smiled. “I heard you even turned down a promotion.”

“I didn’t want an office job. I like driving and if that means I remain an ACW, I can live with that. I’m not meant to be stuck behind a desk.”

Ilona finished her tea and peered out of the window. The lorry was empty. “I had better get back,” she said. “Before it gets dark.” She rose and waved to the sergeant before dashing out to her lorry, avoiding the biting wind as much as possible.

The other good thing about driving was that she had little time to think about anything other than keeping the lorry on the road. She found that unexpected things could reduce her to tears—the way the evening sunlight touched a meadow, a kestrel hovering over the Brecks or the long sweep of the Milky Way on a cloudless, moonless night. Ian would be there, his voice in her ear or his hand on her face, as light and fleeting as the touch of a moth’s wing. It was enough that she would dissolve into helpless tears, her longing for him a huge, burning ache that would not go away.

War puts courage and love to the test.

It’s 1939, a lone Spitfire roars over her family home, and Ilona Lowe, entranced by its grace and power, finally knows her place in the fight against Hitler. She joins the Women’s Auxiliary Air Force, is stationed at RAF Catterick and embarks on an all-too-brief love affair with a Bleinheim bomber pilot who is killed during the Battle of Britain.

Heartbroken, but determined to carry on, Ilona returns to active duty where she encounters Francis Robson. He’s arrogant—some would even say reckless—and another pilot. Yet he’s worth the risk.

Their love isn’t easy. Francis harbors jealousy about her former lover while Ilona’s posting at an RAF bomber base feeds her nightmares about Francis’ safety. She can see the escalation of stakes as his missions grow ever more dangerous, the enemy more desperate. Ilona must put her courage to the test because she knows that loving Francis means letting him let him fight on, regardless of the terrible price they both may pay.

Enter Totally Bound’s October blog tour competition for the chance to win an eBook of your choice, not including boxsets or anthologies.