Review: Wedding Date for Hire (Anyone But You #2) by Jennifer Shirk 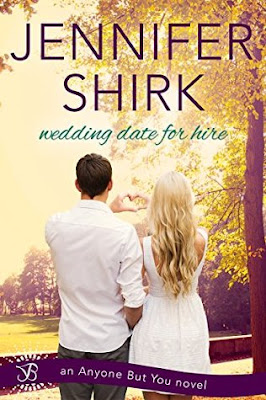 "Don't worry, sweetheart. I guarantee I'll be worth every penny." - Trent Montgomery

Maddie McCarthy is single, between jobs, and (oh, the shame) lives with her mother. To make matters worse, she's the maid of honor for her sister's wedding, and desperately needs a date. Then she sees her salvation-Match Made Easy, a service for women in Maddie's exact position. If she can't find a boyfriend, she'll do the next best thing...

Trent Montgomery isn't actually part of Match Made Easy. He's just doing a favor for his cousin, but one look at the blonde who hired him, and he's totally hooked. Now Maddie thinks that the attraction sizzling between them is just "part of the package." And Trent is running out of time to prove to her that her date-for-hire might just be her happily-ever-after...

Wedding Date for Hire, an adorably sweet romance, was just what the doctor ordered. I felt myself quickly slipping into a reading slump and, while I did have a little bit of trouble getting into the story, it was quick enough to give me the satisfaction of finishing a book. There's not much I can say about this story other than that it was so freaking cute and lovely. The characters were tons of fun. Watching them slowly move towards a friendship and a new relationship made me smile. The laughs they shared. The bickering and one-liners they sent flying at each other. I giggled was poor Maddie stumbled along until the finally realized that she can fall in love. Trent's non-stop efforts to win her over made me swoon. Such a cute romance that'll keep you company when you're between books or just when you want something quick and romantic to read.

Jennifer Shirk has a bachelor degree in pharmacy-which has in NO WAY at all helped her with her writing career. But she likes to point it out, since it shows romantic-at-hearts come in all shapes, sizes, and mind-numbing educations. She writes sweet romances (some even funny!) and won third place in the RWA 2006 NYC's Kathryn Hayes Love and Laughter Contest with her first book, The Role of a Lifetime. Recently, her novel Sunny Days for Sam won the 2013 Golden Quill Published Authors Contest for Best Traditional Romance.

Check out the first book in the Anyone But You series!