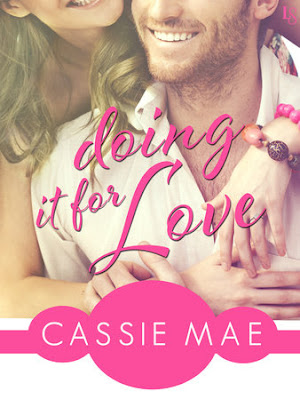 Cassie Mae’s charming, sexy new novel, perfect for fans of Emma Chase, puts a steamy twist on modern love as one bride-to-be tries to put the spark back in the bedroom—by any means necessary.

Elizabeth Fanning’s life looks pretty perfect, judging by the diamond ring on her finger. Her fiancé, Landon, is sweet, handsome, and hilarious. The trouble is, before they’ve even tied the knot, their sex life has gone from mind-blowing to “meh”—and Liz isn’t ready to be part of an old married couple. After a cathartic call to her best friend, Liz comes up with a brilliant idea. She and Landon may never be able to re-create the magic of their first time, but how amazing would their wedding night be if everything below the neck was off-limits until then?

Liz thinks it’ll bring them closer together. Landon’s convinced she’ll cave first. So they raise the stakes: Whoever lasts longer gets to pick their honeymoon destination. With her heart set on the Bahamas and Landon fighting for snowbound Utah, Liz simply has to win. But pretty soon, her body is screaming for attention, and Landon’s never seemed so far away. Has Liz’s experiment backfired? Losing their little competition would be frustrating—but the one thing she can’t afford to lose is him.

Laughter turns to deep sighs as Landon wipes my face free of all the water. He presses a soft kiss between my eyebrows.

“You’re going to be my wife,” he whispers, like a prayer, a wish, a dream he never thought would come to life. My heart thumps between our bodies, thumps against his, answering his beats with mine.

“Mrs. Wangford.” I bite my smile back, but it’s no use, Landon pauses above me, his whole face lighting up.

“I’ll say it in a seductive voice when I get my driver’s license.” I drop my voice an octave. “Wangford.”

“That’s so sexy,” he teases, biting my earlobe. I involuntarily giggle, goose bumps shooting up and down my entire body. That’s totally my spot, and he knows it, so he runs his hands across my puckered skin while he nibbles.

“Can’t be helped.” I kiss his shoulder when he bumps it against my lips. “I really like it.”

“I know.” He bites again, causing more laughter and goose bumps. “But when you laugh, it does things. Down there.”

“I know it doesn’t hurt,” I say, then flex my Kegel muscles. He groans.

“You’re counting?” When was the last time we counted?

He ignores me, resting an elbow on the pillow, and using the heel of his hand to hold his head up. “On most occasions I purposely make you laugh because of how it feels.” His lip twitches upward. “It’s like a hug.”

I stifle a snort, and he growls to the ceiling.

“You keep laughing, and I’m gonna shoot off before I can do my move.”

His jaw drops, and his stroking fingers turn to tickle monsters up and down, down and up my ribs, until he grips my sides and pulls me on his lap. My knees sink into the duvet next to his hips, and I run my nails through his damp hair. The stars in his gray irises seem to light the entire bedroom, echoing the moon dancing across the bedsheets.

I can’t believe I get a whole lifetime of this.

“Me neither,” he says, and a much smaller laugh tumbles out of my mouth. I had no idea my thoughts escaped me.

Landon’s lips meet mine softly, then harder, then all over. My laughter, my mind, and my body drift away into just one of the many beautiful moments I get to experience with this man. He feels so good, and the last time we had sex like this feels like a lifetime ago.

I’m just getting into my rhythm when I halt mid-hump with a gasp.

“What, what, what?” Landon says underneath me, sweat and shower water covering his skin.

He looks at me like I just spouted Greek. “Huh?”

“A condom, Landon. I stopped taking my pill a week ago.”

“Maybe . . . ?” I’m being optimistic. I think I tossed them out during my last sex drawer cleanup.

He slowly lifts me off him, and we both groan when we leave each other. I roll off the mattress, probably not looking so sexy with my naked squat and crawl to the naughty drawer in my nightstand.

“I could just pull out,” Landon suggests as I dig around the lubricant, the sex tarot cards we’ve used maybe once, and the blindfolds we use much more than that, but not lately. There’s not a single condom or any other form of birth control in here—unless you count the picture of my parents that must’ve slipped through the cracks from the drawer above it.

“I don’t know. I think I’d rather be safe than sorry.”

“Maybe Theresa does.” Actually, I’m almost positive she does. I put the picture of my parents back in the right drawer and get to my feet. “I’ll be right back.”

“Your nipple is poking out,” he says, pointing at my left boob as I shrug into my fuzzy purple robe.

“Thanks. Keep it up, will ya?” I point back at “Lord Landon” and speed-walk out of the room, out my front door, down the hall, and rap on Theresa’s door.

And just my luck, she doesn’t answer. I slump back, lady parts laden with disappointment.

“No?” Landon asks, still hard and ready on the bed.

“I’ll pull out,” he says, grabbing the tie on my robe and ripping it open.

“Let me get a towel.” I push him off before we get so into it I won’t care until we have to clean it. Then I’ll really care.

After placing the towel on the bed, Landon kisses me, probably knowing I’ve dried up and I’m losing whatever mojo I had ten minutes ago.

But we just got engaged, so no way in hell am I not having sex tonight.

Cassie Mae (who dons the name Becca Ann on occasion) is the author of a few hundred—okay, maybe not that many—books. Since writing her bestselling debut, Reasons I Fell for the Funny Fat Friend, she has published books with Random House, Swoon Romance, and Tulip Romance. She has a favorite of all her babies, but no, she won’t tell you what it is (mainly because it changes depending on the day). Along with writing, Cassie likes to binge-watch Teen Wolf and The Big Bang Theory. She can quote Harry Potter lines quick as a whip. And she likes kissing her hubby, but only if his facial hair is trimmed. She also likes cheesecake to a very obsessive degree.