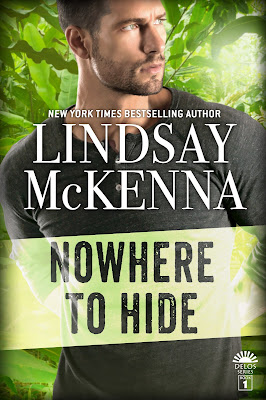 Lia Cassidy left the Army scarred physically and emotionally after a vicious attack by two fellow soldiers. She turns to helping others, working at a Delos Home School Charity in Costa Rica that provides schooling for children. But when the deadly drug lord, La Arana, attacks the school, Lia finds herself on the run for her life. The only person she can trust is the ex-SEAL sent to protect her.

Cav Jordan is strong, honorable and gorgeous…and intrigued by Lia. He knows she has suffered pain in her past, and he is determined to break through her barriers and earn her trust. But as Cav slowly chips away at the walls Lia has built, ghosts from her past threaten to destroy their fragile relationship. 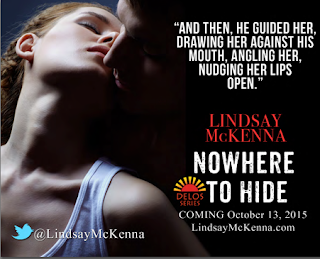 Lia did something that her heart whispered she must do. She leaned forward, her hands tentative on Cav’s shoulders, lifting her chin, seeking...finding...the tortured line of his mouth.

Her world exploded around her. She had closed her eyes, leaning into Cav, wanting to absorb his pain, try to make him feel better. The overwhelming desire to kiss him drove her to boldly step out of her own fear and hesitancy. For a split second, Cav froze. And then, his hands tightened around her face, guiding her, drawing her against his mouth, angling her, nudging her lips open. Lost in a haze of light, joy, and need, she eagerly accepted his hunger. He moved his mouth powerfully against hers, a sense of starvation, of need for her. An avalanche of heat and fire roared to life within her lower, dormant body.

She felt him tremble as he hauled her against his chest, felt him control himself for her sake, his mouth gentling against hers.

A moan caught in her throat as he opened his fingers, sliding them through her hair, cherishing her, caught up in the heat and molten moment that glowed wildly between them. Her heart beat in triple-time as he moved her around for deeper access to her, bringing her closer in his arms, cradling her, his mouth locked with hers, not allowing her to escape.

But Lia didn’t want to go anywhere. She was relaxing into his embrace, feeling his hand trailing down her jaw, slipping around her neck, following the curved line of her spine. His mouth was cajoling. Breathing shallowly, she eagerly returned his kiss, a deep ache grew between her legs, and wetness coated the insides of her thighs.

Shyly, she moved her hand up from his shoulder to his thick neck, feeling the pulse of his jugular against her fingertips. His breathing was short and hard as he suddenly realized he might be hurting her. He softened his mouth against hers, silently demanding she fully reciprocate by exploring him.

That was all Lia needed. Her fingers curved against his jaw and she deepened their kiss, her body molding urgently to his. The moment her breasts touched Cav’s chest, a whimper lodged within her throat. Now, Lia knew just how sexually starved she really was.