Review: Once Upon a Power Play (Risky Business #2) by Jennifer Bonds 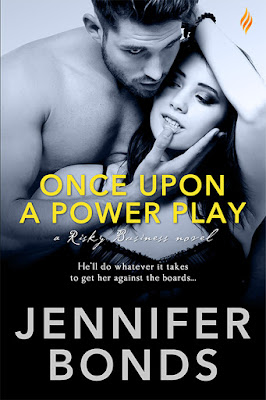 "I'll bring the shoes, you bring the condom." - Chloe Jacobs

Sidelined by a potentially career-ending injury, the only thing hockey player Ryan Douglas should be thinking about is recovery. But after sharing a near death experience and a night of passion with a spunky brunette, the only thing on his mind is five and a half feet of sexy sarcasm. And he’ll do whatever it takes to get her back in his bed—even if it means playing dirty.

Chloe Jacobs is done with fairytales. And men. She’s kissed her share of frogs and what’s it gotten her? Dumped by text—again. Determined to eighty-six illusions of romance and prove she’s more than just a good-time girl, the last thing she needs is a pushy, arrogant hockey player testing her resolve. Especially one who’s sinfully good with his hands and thinks date-by-blackmail is a perfectly acceptable social convention.

Ryan wants to play games? Fine by her, but this is one faceoff he’s going to lose.

How much did I love Once Upon a Power Play? Let me count the ways... Ryan = hockey player. Yes! Setting? Christmas. Yes! Sex? Holy Mother of Hotness, YES!! I'm sorry if it sounds like I'm on the verge of a When Harry Met Sally moment, but that is how much this book friggin' rocked my socks and kept me up all night. Ryan and Chloe were amazing. The banter between them was phenomenal. The sexual chemistry between singed my Kindle. Sheer perfection from the first page to the very last. Yum!

Score! Ryan Douglas grabbed the last lime, thankful the tiny store had in stock at least one item he needed. He shook his head. Back home, people didn’t go crazy and clean out the grocery store every time it snowed. As far as he could tell, east coasters labored under the delusion they’d be snow bound for days every time a flake dropped from the sky. It was the craziest damn thing he’d ever seen, and after five years in the city, he still didn’t get it.

He froze in his tracks, slowly turning around to find a tiny, pissed off brunette glaring at him with one hand on her hip and the other hugging a gallon-sized jug of margarita mix. “Excuse me?”

“The lime,” she said, nodding her head and enunciating each word as if he might not speak English. “I saw it first.”

It was impossible to suppress the grin that spread over his face. Was she serious? His gaze raked over her, taking in the fancy upsweep of her dark hair and the lacey gold dress—if you could call it that—that revealed more than it covered peeking out from under her unbuttoned coat. The furry brown boots climbing halfway to her bare knees? Those he could do without, but the rest was pretty damn sexy. There wasn’t a winter coat around that could hide those curves. She had the kind of body a man could sink his teeth into. And he. Was. Ravenous.

“Like what you see?” She raised her brow and hooked a thumb over her shoulder. “The meat department is two aisles over.”

He laughed, and it was an honest-to-God, full-on belly laugh. She was a fiery little thing. But that didn’t mean he was giving her the lime. Maybe if she’d asked nicely. But with that attitude? It’d be a cold day in hell.

“Last I heard, possession is nine-tenths of the law.” He tossed the lime in the air and caught it with his right hand. She glared at him, and for a moment he thought she’d kick him in the balls with her big furry boots. He was being an ass, but she wasn’t exactly Miss Manners herself. Besides, it was the most fun he’d had all day. Which spoke volumes about his shitty afternoon, most of which had been spent getting his ass kicked by a sadistic physical therapist. His leg hurt like hell, but he’d tough it out. He had no other choice if he wanted to salvage his career.

The brunette rolled her eyes, the dark irises shimmering like black coffee under the soft glow of the overhead lights. “It’s not my fault you have inhumanly long lumberjack arms.” The smirk that followed told him yes, she was in fact referring to his worn flannel shirt.

Typical self-important New York princess, judging him by something so superficial. Not that he gave a fuck what she thought, but man, what he wouldn’t give to wipe that little grin off her heart-shaped face. And with years of experience antagonizing his two older sisters, he had a pretty good idea of how to do it. He waved the lime in front of her again, wondering if she’d try to make a play for it. Not that she could get her hands on it if he didn’t want her to. He towered over her by nearly a foot, and his reflexes were pretty damn good. “Princess, I wouldn’t give you this lime if you got down on your knees and begged, but if it means that much to you, you’re welcome to give it a go.”

Jennifer Bonds writes sizzling contemporary romance with sassy heroines, sexy alphas, and a whole lot of mischief. When she's not writing or wrangling toddlers, Jennifer can be found curled up with a good book and a bottle of wine. Jennifer lives in Carlisle, Pennsylvania, where her overactive imagination and a weakness for reality TV keep life interesting. She's lucky enough to live with her very own real life hero, two adorable children, and a pair of rambunctious dogs. Loves Buffy, Mexican food, the Winchester brothers, and all things zombie. Sings off-key.

Check out the first book in the Risky Business series...