Spotlight & Excerpt: No Groom at the Inn (Dukes Behaving Badly #2.5) by Megan Frampton 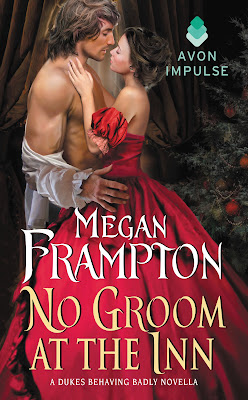 In this Dukes Behaving Badly holiday novella, a young lady entertains a sudden proposal of marriage-to a man she’s only just met.

What does a lady do when a man she’s never seen before offers his hand in marriage? Lady Sophronia Bettesford doesn’t scream and run away. Instead, she accepts the shocking proposition. After all, what’s her other choice? To live with her cousin, caring for six children and a barnyard full of chickens?

James Archer has roamed the world, determined never to settle down. He’s faced danger and disaster…he fears nothing and no one except his mother and her matchmaking ways. So when ordered to attend a Christmastime house party filled with holiday cheer and simpering young misses, he produces a fiancée!

Sophronia and James vow to pretend to be in love for one month. But when they each promise to give each other a Christmas kiss it becomes clear that this pact made out of necessity might just be turning into love.

“Excuse me, miss,” a gentleman said in her ear. She jumped, so lost in her own foolish (fowlish?) thoughts that she hadn’t even noticed him approaching her.

She turned and looked at him, blinking at his splendor. He was tall, taller than her, even, which was a rarity among gentlemen. He was handsome in a dashing rosy-visioned way that made her question just what her imagination was thinking if it had never inserted him—or someone who looked like him--into her dreams.

He had unruly dark brown hair, longer than most gentlemen wore. The ends curled up as though even his hair was irrepressible. His eyes were blue, and even in the dark gloom, she could see they practically twinkled.

As though he and she shared a secret, a lovely, wonderful, delightful secret.

Never mind that all those words were very similar to one another. Her word-specific father would reprimand her—if that gentle soul could reprimand someone, that is—if he heard how cavalierly she was tossing out adjectives that all meant nearly the same thing.

But he wasn’t here, was he, which was why she was here, and now she was about to find out why this other he was here.

Far too many pronouns. Her attention returned to the tall, charming stranger.

Who was talking to her. Waiting for her response, actually, since she had spent a minute or so contemplating his general magnificence. And words, and her father, and whatever other non-chickened thoughts had blessedly crossed her mind.

“Can I help you, sir?” Sophronia asked. He was probably lost on his way to the Handsome Hotel where they only allowed Exceedingly Handsome guests.

That he might think she’d know where the Handsome Hotel was gave her pause. Because she was not handsome, not at all.

But what he said was next was even more unexpected than being asked to provide directions to some establishment where one’s appearance was the only requirement for entry.

“Would you marry me?” he said in a normal tone of voice as though he hadn’t just upended Sophronia’s entire world.