A visit with Flora Dain, author of Taming Saffina 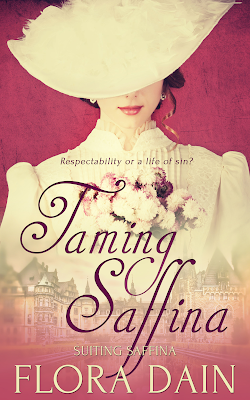 Hello all! Please join me in welcoming author Flora Dain. Celebrating the release of her new book Taming Saffina, Flora is here to give us some insight into her heroine, Lady Saffina.

Take it away, Flora!

As soon as you start looking into history, former times – the Regency period especially – often seem two-faced and full of wickedness. I’m guessing that’s because research into all the ins and outs of people’s lives – including the vast store of private letters held in libraries and archives and available to us today – spills all their secrets. Goodness knows what future historians will make of us – should there be anything left to find out!

But people in the past may well have had their reasons for keeping secrets. Women’s place in society was especially vulnerable, because they had so few rights. For society ladies, a tarnished reputation, a child out of wedlock, - or for servants, an unplanned pregnancy, a few pennies stolen from an employer, - could all mean a lost position, a blackened name, and possible penury.

Saffina’s wild ways may be seductive, but are also of grave concern to her rakish guardian, almost as much as to her dashing neighbor. In spite of her wealth and her beauty, her reputation once lost may never be regained, and while her high spirits and undoubted charm should guarantee a successful match, both the men, from their very different viewpoints, can see she’s running a terrible risk.

In a society where almost everybody attended church regularly, and manners were formal to the point of pained – many married couples of ‘the middling sort’ (middle class to us) called each other Mr and Mrs throughout their lives – affairs were common among the upper classes and eagerly discussed. They were also dangerous. Divorce was rare, and brought disgrace, while love, as always, flourished. The main reason was that among the rich marriage was sought, and often treated, as a property deal, so inevitably love bloomed elsewhere. Saffina’s guardian views her girlish lust and easy virtue with callous amusement, Sir Nigel with horror. Beautiful, rich but untamed, she’s desirable and eligible for sure, but a risky match for any man. She may even lead him to social ruin.

Her guardian tries to tell her this, but as he slowly uncovers the true depth of her girlish passions and her appetite for carnal pleasure he knows he’s struck gold. With a hearty taste for discipline and the right kind of instruction, she’ll go far. And who better than he to give it? A man of means, and discerning (and famously depraved) tastes, he’s delighted to find in her a willing pupil. But can her reputation survive the taint of his contact? Slowly his mood darkens, as he starts to realize he may be the worst man to do it and maybe even ruin her chances. Secrecy and restraint are his only hope of success - but Saffina’s lively take on life makes this increasingly unlikely. 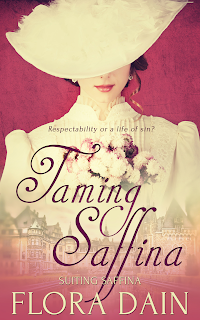 When an heiress runs wild, her stern guardian comes back from abroad to take the whip hand...

A willful heiress is taken in hand when her guardian, the disgraced Earl of Endale, returns from abroad to find her a husband and launch her into society. With a reputation as dark as his allure, she finds his discipline both exotic and exciting. To her delight, his instruction includes strict and detailed attention to pleasure. She’s fiercely attracted, but when he probes her past, she soon vows to resist. Her heart lies elsewhere, and she means to marry handsome Sir Nigel, her clean-living neighbor and friend. But to her dismay, she finds Sir Nigel has doubts. He suspects her untamed sexuality is due to the Earl’s evil influence. Concerned for her safety and her status, Sir Nigel insists she must be tamed and warns she risks losing both his love and her place in society. He attempts a bold rescue, but now she must choose—respectability or a life of delicious sin?

I blinked. Now I saw him up close, it struck me he was exceptionally fine looking. His dark eyes pierced mine with a rare gleam of cold, hard intelligence. His tilted eyebrows gave the hard lines of his face a certain delicacy. His smile softened the arrogance of his classical profile without dissolving into the pudgy leer of Isaac or the local farmers.

An aristocrat then, for all his racy reputation…and he wanted an answer.

He’ll make me come? If he did that, he deserved thanks indeed.

“Yes, sir,” I whispered shyly. “And…are you going to…breach me?”

Was this too brazen? I was risking much today. But if he was in the mood…? I certainly was, more than ever. Why use a groom when I could have the master—and a lord to boot?

His eyes flashed. “Deuce, ma’am, your governess was right. You are indeed without shame.

Take my pleasure in a barn? What do you take me for? One of your stable louts? Come, we’ll clean you up. You have a maid? If not, my valet can do it.”

His valet? My temper flared. “I have several maids, sir. And I’ll thank you to untie me.”

He arched an eyebrow. I saw his nostrils flare, like he sensed victory.

“I give the orders here. We were discussing my reward, I think.”

His hand landed on my bottom with a crash, making me cry out. “You think this a joke? Do I look like a prankster? Now keep quiet.”

He jingled the bit again. I jerked my head away, but I was tightly trussed and still bent over, hands tied firmly at my back.

He looked on with a faint smile. “Going somewhere, ma’am? I think not. I’ll allow you to straighten up a little. Just enough to walk.”

He loosened the straps and raised me up. He smiled down at me, his lip curling. As I eased myself upright, he wrenched the straps tight again, hauling my arms behind me. His eyelids lowered.

“Now we’ll go into the house. I’ve had a hard ride. I badly need my valet. And my mount badly needs your groom—possibly more than you did. Come.”

Flora is a multi-published author who is married with two children and lives in the UK. She loves reading, writing, good reviews, cold, crunchy ice cream and hot, smooth movies. And especially connecting with readers—a real thrill!