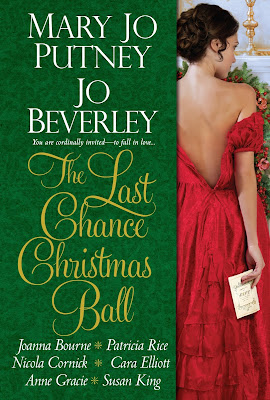 Upstairs and downstairs, Holbourne Abbey is abuzz with preparations for a grand ball to celebrate the year’s most festive—and romantic—holiday. For at the top of each guest’s wish list is a last chance to find true love before the New Year…

A chance meeting beneath the mistletoe, a stolen glance across the dance floor—amid the sumptuous delicacies, glittering decorations, and swell of the orchestra, every duchess and debutante, lord and lackey has a hopeful heart. There’s the headstrong heiress who must win back her beloved by midnight—or be wed to another….the spinster whose fateful choice to relinquish love may hold one more surprise for her…a widow yearning to glimpse her long-lost love for even one sweet, fleeting interlude …a charming rake who finds far more than he bargained for. And many other dazzling, romantic tales in this star-studded collection that will fill your heart and spice up your holidays…

From IN THE BLEAK MIDWINTER by Mary Jo Putney

December 26, two days before the ball...

Captain the Honorable Kimball Stretton gazed out the window of the stone tower, his heart as gray and cold as the Northumberland hills. He’d grown up here at Holbourne Abbey, and once he’d loved the drama of the changing seasons, from vibrant spring through lush summer, dazzling autumn, to the subtle shades and warm fires of winter.

The locals called this remnant of an ancient Norman castle the Lucky Tower, and their vehement protests had prevented one of his ancestors from tearing the structure down when the new house was built. The tower had been repaired so it wasn’t a public menace, and now a drafty passage connected it to the back of the new house.

As children, Kim and his brother had loved playing up here. Usually Edward was King Arthur while Kim took the part of Lancelot. After Roxie arrived, they’d tried to persuade her to be their Guinevere, but she’d scornfully refused. She preferred playing Morgan le Fay, who had beauty, power, and danger.

Kim’s lips curved involuntarily as he remembered the first time he’d met Roxie. The April day had been clear and sunny, with the cool blue sky of the north country. Kim and Edward had been preparing to ride out into the hills when a small female figure with blazing red hair had appeared.

Their mother had told them of the poor little Hayward girl who had lost her parents in a carriage accident and had come to live with her grandparents on the neighboring estate. Her grandmother was going to bring the girl to Holbourne to visit Caro in the nursery. The new little orphan had nothing to do with the sons of the house.

Then a redheaded sprite with a pale face and dark circles under her eyes had marched into the stable yard. Looking from one boy to the other, she asked, “Can I go riding with you?”

Edward said gravely, “You must be our new neighbor. I’m Edward, Lord Brentford. I’m pleased to meet you.”

She bobbed a curtsey. “The pleasure is mutual. I am Miss Roxanne Hayward.”

Wanting that intense little-girl gaze on him, Kim said, “I’m Kimball Stretton, but everyone calls me Kim. I’m very sorry about the loss of your parents.”

Her lips quivered before she gave a short little nod of acknowledgment, then asked again, “Can I ride with you, please?”

Edward was not immune to the appeal in those great gray eyes, but he shook his head regretfully. “Not without your grandmother’s permission. Besides, we don’t have a pony your size. You might get hurt. You can play with our sister, Caroline.”

“She’s just a baby.“ Roxie tilted her chin up, miserable but refusing to ask again. She was so small, so gallant. Unable to resist her any more than he could resist a forlorn puppy or a kitten, Kim said, “You can ride with me.”

“I’ll keep her safe.” Kim leaned over and extended his hand. “Come on, Red, I’ll show you the hills of your new home.” Her small face blazing with delight, Roxie caught his hand and he lifted her up and settled her astride in front of him. Kim suspected that his mother and Roxie’s grandmother would not approve, but he was used to disapproval. If he got a scolding, it would still be worth it to see Miss Roxanne Hayward’s radiant smile.

He’d been a slave to her smile ever since. But he no longer belonged at Holbourne Abbey.