Review: Caught by You (Love Between the Bases #2) by Jennifer Bernard 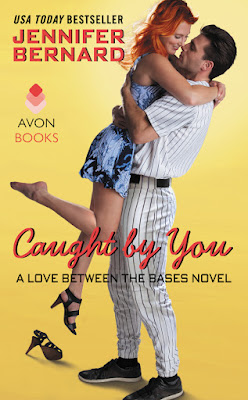 "You shouldn't be allowed near any woman with ovaries. It's just not fair." - Donna MacIntyre

Months of alternately flirting and bickering with Kilby Catfish catcher Mike Solo just turned into the hottest kiss of Donna MacIntyre's life—and that's a major league complication. Any hint of scandal could keep her from getting her son back from her well-connected ex. Then Mike comes up with a game-changing idea: a marriage proposal that could help win her case—even as it jeopardizes her heart.

Mike hasn't been able to get the gorgeous, gutsy redhead out of his fantasies. The least he can do is fix the mess he helped create. Yet their engagement is quickly becoming about a lot more than doing the right thing. Because after swearing he'd never risk love again, Mike has found a passion that puts all his emotions in play, and a woman he'll go to bat for again and again.

Holy Hannah! I was not expecting the emotional ride Caught by You took me on. What can I say? I love rollercoasters, emotional or otherwise, and I freaking loved every gosh darn page in this book. From the moment Mike and Donna lock eyes on each other in the first Love Between the Bases book, I think we all knew what was in store for these two when they finally come together. The build-up in All of Me lead to a sexually charged reunion in Caught by You. It was fabulous. As much as he tries to help those he loves, Mike's superhero complex tends to get him in trouble as he likes to leap first and think later. He has all the best intentions to help Donna fight to get her son back. He wants nothing more than to help her in any way he can and he does so by concocting a plan that came out of nowhere. I must not have paid much attention to the book's blurb before reading it because his proposal seriously came out of left field. I loved that Donna didn't just give in. Oh no, girl made him work for it and I was cracking up the entire time. The banter between them was hilarious. Verbal foreplay at its best! I foresee lots of corn tortillas in their future.

From the characters to Jennifer's writing, I loved Caught by You just as much as I loved the first book in the Love Between the Bases series. I laughed as Donna tormented and teased Mike. I sighed as we got to know more about Mike, especially his love for his big brother. The ending left me with a bit of mixed emotions. Happy for Donna and Mike, of course. And sad because I didn't want to leave them. I cannot wait until the next book comes out. Finally, we get to fall for Trevor!