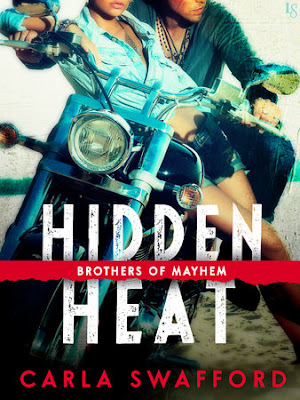 Sizzling with passion and suspense, perfect for fans of Joanna Wylde and Julie Ann Walker, the Brothers of Mayhem series revs up as a headstrong beauty faces off against an outlaw motorcycle club—and falls for the bad boy she never saw coming.

Cassidy Ryder refuses to be intimidated by anyone, even the hell-raising, hard-drinking Brothers of Mayhem. The daughter of their former president, she’s not above smashing a few heads to keep her teenage brother safe. But when Cassidy’s big mouth gets her in trouble, the only thing that saves her is some quick thinking from the Brothers’ bartender. He’s commanding and strong, and as smooth as the whiskey he pours: the ultimate temptation for a girl who swore she’d never be a biker’s plaything.

But Thorn Savalas is no ordinary biker. He’s a cop, and he’s worked too hard earning the Brothers’ trust to blow his cover over a female—even one who rocks a pair of jeans like Cassidy. The only way to protect her is by claiming she’s his old lady. Trouble is, Thorn can’t just pretend. He wants Cassidy, and every scorching touch tells him she feels the same. But acting on their hottest fantasies could leave them both exposed . . . even if nothing else has ever felt so real.

“Listen, sugar, I’ll tell you about your brother, but you need to keep your mouth shut.”

“What is it about you people? I can say whatever I like. This is a free country.”

He let his disappointment show on his face. “You’re smarter than you’re acting.”

He slapped the wall, frustrated that he couldn’t make her understand. She straightened, face pale and eyes wide open. That got her attention.

“For Christ’s sake, listen to me before you get us both killed,” he said, grinding his back teeth in impatience. She finally closed her mouth. “Storm is running an errand for Stonewall. And no, I can’t tell you more than that. I’m taking a chance as it is. He should be back by midnight and then I’ll tell him to call you.” Finally, in control of his body, he walked around the desk and grabbed her arm, wanting to emphasize the danger she was in. He leaned down. “Go home,” he whispered.

Her eyes searched his. Probably trying to guess his game. All he wanted to do was keep her safe, but she refused to believe it. For now, they had one more problem: how was he going to explain to the club about their time alone in the office?

He had only one solution.

Moving a little closer, he added, “Before you head home, you need to look like we went at it hot and heavy back here.”

“What?” She took a step back, confusion on her face as she glanced around.

“There is only one reason for a Mayhem Brother to take a female in the back office, and that’s to fuck her. Unless you want me to do it for real, you need to look the part.”

“Huh?” She frowned. Why was she having such a difficult time imagining anyone wanting her in that way?

Had no one ever come on to her? Were the bastards around there blind? He sighed and then tightened his grip on her arm.

Guessing she would learn the hard way, he kissed her. Admittedly, he’d wanted to do that since the first time his gaze ate her up. All round curves in the right places, she looked like a sex doll come to life. He’d tried to stay away from her, but this opportunity was too good to pass up.

For a split second, she pushed against his chest and then her arms slid around his neck. He cupped her full breasts and pinched her nipples. She groaned in his mouth. Without wasting time, he pulled at her tee, twisting it slightly, and pressed her back against the wall. His hand ran across her stomach, flipping the snap open on her jeans with his thumb. She smelled so good, a mixture of healthy woman and a hint of flowers. Her mussed hair from earlier was no match for his fingers running through the soft strands again. She groaned and arched into him. Damn, she was deliciously responsive.

His willpower neared the breaking point and he let her go. He walked stiff legged to the door and peeked out. All clear. One deep intake of musty air, he braced for what he’d see. Rumpled and dazed, she appeared well fucked. He bit the inside of his mouth to stop from groaning in regret. What he’d give for it to be true.

“Come on.” He held out his hand. “Better leave now or I’ll finish what I started.”

She shook her head and hid her hands behind her back.

“Why are you helping me?”

“The hell I know,” he snapped. That was a lie. Anything he said would only lead to more questions he couldn’t answer.

Another shake of her head. She appeared stuck to the floor. Was she trying to clear her head or protest his option? Before she decided to cause more trouble, he clasped her arm. She winced, and he eased off a little.

Damn, last thing I need to do is leave bruises.

Tugging her out of the door, he headed toward the barroom. When she placed her hand over his and looked into his eyes, he loosened his grip a little more. Then she matched his stride.

Everyone stared. Two old men playing cards near the door chuckled and returned to their game.

Showtime. He hoped she’d play along.

“Next time, call me.” He lightly slapped her ass. “I’ll tell you when I can visit and help with your problem,” he said, loud enough for everyone to hear.

She blinked and glanced around before nodding.

Slightly amused by the lost-little-girl look on her face, he lifted her chin with a finger and kissed her again. He sank into it wholeheartedly without any other motive but to enjoy her taste. Her lips parted without hesitation. Her tongue darted into his mouth, and he almost came in his jeans. Damn. Why hadn’t he shoved her out the door faster?

The room burst out in applause, wolf whistles, and several obscene suggestions.

Regaining control, he ended the kiss and propelled her toward the door. “See you later, sweet cheeks.” His hand smacked her ass one last time. It felt so good.

He watched her move like a zombie down the sidewalk to the parked cars. She looked back. He grinned at her angry, confused look. She jerked around and sashayed to her old beat-up sedan. That livened her up.

He liked that he stirred her up in every direction, from hormones to indignation. She needed something else to think about besides the whereabouts of a rebellious brother. That would likely get her into trouble.

As she stalked by, several Brothers hanging near the front porch checked her out and then glanced back to where he stood. One burly fellow gave a thumbs-up.

Curses filled the air. She struggled with opening the car door, and it opened with a loud metal squeak. The joints definitely needed oiling.

How did that piece of shit hold together? She needed a better ride, something safe.

Who was he to worry about that?

He turned back to the barroom and caught the expression on Stonewall’s face.

Well, hell. Thorn didn’t like that smile one bit. Meant nothing but trouble.

What in the hell had he gotten them into? How was he going to protect her and himself?

Carla Swafford loves romance novels, action/adventure movies, and men, and her books reflect that. She’s married to her high school sweetheart and lives in Alabama.