Looking for the perfect romance read for Valentine’s Day? Below, we’ve got excerpts from six of today’s best contemporary authors. And watch out as the heat level goes from sweet to sultry to downright sinful.

Read on and get ready for your temperature to rise! 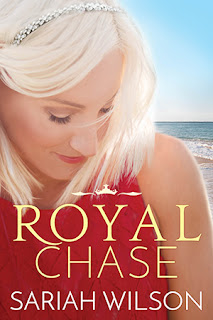 If you want a sweet read for the holiday, then look no further than Royal Chase by Sariah Wilson. When PR agent Lemon Beauchamp gets her client Prince Dante of Monterra booked on a reality show, she never expects to find love. But when flirting turns to something more, they share their first kiss...

“What is that scent?” he asked.

“Lemon sugar,” I said, my heart beating too quickly.

“Sweet and tart, like you,” he said before he planted a soft kiss at the amazing spot where my neck met my shoulder, and the earth shifted on its axis.

I decided it had been far too long since I’d last kissed somebody if this was how I was going to react. I also thought for a moment that I should stop him, but the only thing I said was, “My lip gloss is lemon-flavored, too.”

Which was such a blatant invitation, and from the fire in his eyes and the seductive smile on his face, he knew it.

“I do appreciate the commitment to your name.” He set down his drink and used his free hand to run his fingers up and down my arm, which gave me chills and hot flashes at the same time.

“Well, not everyone gets to be named after a fruit. You have to have fun with it.”

He pressed another kiss to my throat, and I closed my eyes as a tingling warmth spread slowly through my body. 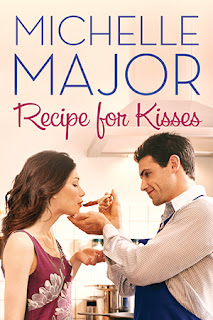 For a savory reading treat, Recipe For Kisses by Michelle Major will hit the spot. Ben “the Beast” Haddox is a bad-boy chef returning to his hometown to open a new restaurant...the only problem is the sizzling Chloe Daniels. Refusing to give up her storefront--or to give into Ben’s charm--the two are at a standoff that simmers with attraction.

“I want to kiss you,” he whispered, and his soft voice and the wicked intentions it carried made her ache for more. “But only if it’s what you want, too.”

She swayed closer, caught in the intensity of his eyes. After her reaction to him reaching for her in the store and that first night when she’d maced him, he must understand that she wasn’t a good bet. “I don’t think I know how to be with someone like you. I like things ordered, soft and gentle.”

She almost laughed at that. “Right.”

“Give me a chance to show you, Chloe.” He ran his hand along her arm, higher to her shoulder then to her neck. She knew he was giving her a chance to become accustomed to his touch and found herself melting because of the thoughtfulness behind the gesture. “Tell me you want this.”

As his rough fingers caressed her jaw, she leaned forward with her heart beating double time and whispered, “Yes.” 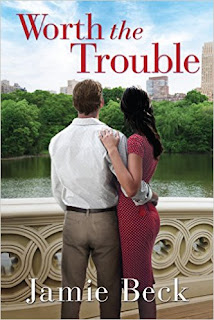 Kick up the heat with Jamie Beck’s Worth The Trouble. Sophisticated cover model Cat St. James could not be more different from rough-around-the-edges carpenter Hank Mitchell. But that doesn’t stop the irresistible pull these two feel for each other.

Her uncertain smile twisted him up inside as she reached one hand up and fingered the ends of his hair. “Kiss me goodnight.”

All the blood drained from his head and raced to his crotch. The relentless throbbing between his legs urged him to comply despite his better judgment. Just a kiss.

As if watching himself in a dream, he saw his fingers caress her cheek. She raised her chin and parted her lips, and he pressed his mouth against hers. He gave over to the moment, to taste her once more, to slip his tongue inside her mouth and tangle with hers. The faint taste of champagne and honey overwhelmed his senses as he grazed her lower lip with his teeth.

Time slowed. Every part of his body came alive. She bulldozed her fingers through his hair while moaning, engulfing him in desire.

“Like I remember,” she whispered against his skin. He’d been teetering on the verge of making a gigantic mistake, until her words summoned bitter reminders of the last time he fell for her games. Abruptly, he grabbed her wrists and pushed back.

SPOTLIGHT ON THE ACTION 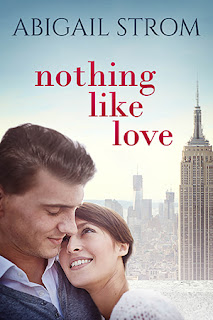 The bright lights of New York City have nothing on the dazzling attraction between set designer Simone Oliver and director Zach Hammond in Abigail Strom’s Nothing Like Love. This sexy British hero with a penchant for quoting Shakespeare and a romantic heart will have you as hot and bothered as the cynic heroine.

He spun them around so Simone’s back was against the wall. He put his hands under her arms and lifted her up, and when her legs went around his waist, he leaned in close.

His erection was cradled against her center now, and they were face-to-face. His heart was pounding hard enough to shake him and he couldn’t seem to find his breath.

But the only thing he wanted to breathe in was Simone.

His lips urged hers apart and his tongue slid inside.

The hot silk of her mouth was like a drug. Her tongue found his and they stroked and tangled, a thousand strands of need and desire binding them together.

His body throbbed against hers. If his lust drove them right through the brick wall and left the two of them lying in the rubble, he still wouldn’t be able to tear his mouth away. 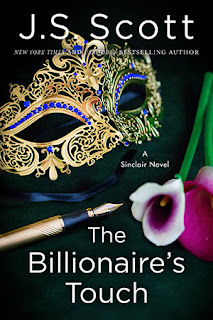 If out-of-control desire is your reading #goal, then J.S. Scott is going to be your new BFF. The author has won readers over with her H-O-T Sinclair brothers, but the stakes are raised with oldest sibling Evan. He is arrogant, Alpha, and amazing, and schoolteacher Miranda Tyler finds herself saying yes...to everything he asks in The Billionaire’s Touch.

“Kiss me,” Evan demanded as he moved his hands down her back and cupped her jean-clad ass with both of his large, strong hands. His fingers gripped the flesh and pulled her molten core into his hard form. “You asked me not to kiss you, so you have to kiss me.”

Randi’s willpower broke as she looked up and saw the longing in Evan’s eyes. It was an echo of exactly what she was feeling, and she could no more resist him than she could stop breathing. Wrapping her arms around his neck, she speared her hands into his coarse hair and yanked his mouth down to hers. She needed his touch more than she wanted to resist him, and as his lips collided with hers, Randi completely forgot why she was even trying to fight the urge to devour him.

He sprang into action the moment she kissed him, taking control as he demanded her complete surrender. Tasting. Teasing. Commanding. Evan’s tongue swept into her mouth, wiping away every doubt she had as he conquered her mouth with his own, leaving her breathless and mindless as he finally surfaced, his teeth catching her bottom lip and nipping at the flesh as though he wanted to mark it.

His lips were suddenly everywhere, and Randi’s hand left his hair and wrapped around his neck as she felt herself being lifted off her feet. She landed on something soft— she assumed it was the couch—but she wasn’t about to turn her head away from his mouth to look. She was too obsessed with the feel of his body against hers to give a crap what she’d landed on.

For some unknown reason, she felt safe letting Evan take control of her body while it burned for his possession. She knew he was feeling the same insane desires that she was experiencing right now. 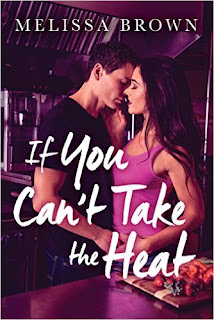 Forget about a love triangle, let’s talk love “square”! Author Melissa Brown’s newest romance If You Can’t Take The Heat has three sexy men after the same woman. And while casting director Whitney Bartolina is usually decisive, the choice between THREE men proves to be too hot to handle. Read on to find out how this take-no-prisoners heroine deals with a hunky cowboy from Montana.

Still holding on to his collar, she threw her head back in frustration. “You’re trying to torture me, aren’t you?”

Suddenly serious, Wes smoothed her hair down and rested his hands on her shoulders. “Not at all.”

“Then what is it?” Didn’t he want her as badly as she wanted him?

She rolled her eyes. “Yeah, I noticed.”

“And it gives us something to look forward to”—he trapped his lower lip beneath his teeth—“next month in Los Angeles.”

Whitney’s stomach did a gigantic flip-flop. “You’re gonna do it?”

Wes nodded slowly. “I have to see you again. It’s not a choice. It has to happen.”

He pressed his lips to the exposed skin of her neck, sucking gently as his fingers weaved through her hair.

Wes said nothing but continued to lick, kiss, and suck at her sensitive skin. She wanted nothing more than to pull him into his car and straddle him right that second, but maybe he was on to something in delaying their gratification. The anticipation of seeing him again, of waiting until the next time they could be intimate, was intoxicating in and of itself.


a Rafflecopter giveaway
Posted by CrystalBee at 2:30 AM

Email ThisBlogThis!Share to TwitterShare to FacebookShare to Pinterest
Labels: Promo