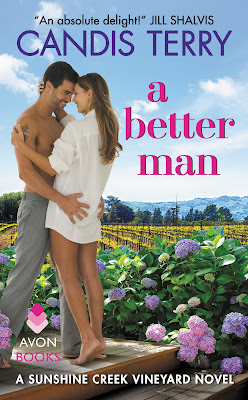 "I think you're an incredible woman. And I am damn happy you're interested in me. Because I sure as hell am interested in you." - Jordan Kincade

In Candis Terry’s first novel in her Sunshine Creek Vineyard series, the handsome Kincade brothers convene to rescue their legacy-but the last thing they expect to find is love….

Hockey star Jordan Kincade wasted no time ditching Sunshine Creek for the NHL, but his sports career has overshadowed everything else-a truth Jordan confronts when his parents’ deaths bring him home. Now his little sister Nicki is flunking out of school, and only one teacher can help Jordan save her-the shy but incredibly sexy Lucy Diamond, the same girl whose heart he broke years ago. But he’s determined not to make the same mistake twice. If only Lucy would give him the time of day.

Love has a way of catching up with you.

Lucy has no intention of drowning in Jordan’s deep blue gaze again, even if he seems to have turned over a new leaf. Still, his devotion to his sister is impossible to ignore. As they team up to salvage Nicki’s future, Lucy soon discovers that Jordan’s sweet caresses and lingering kisses might just be everything she needs.

What is better than a new book from a favorite author? A new book from a favorite author in a brand spanking new series! Can I get a woot woot? Candis Terry is back with A Better Man, the first book in her new Sunshine Creek Vineyard series. In a way, A Better Man felt like it was a mix of Terry's beloved Sweet, Texas series with a dash of her Sugar Shack series. Much like the Wilder brothers from Sweet, Texas, the hunky Kincade brothers come home, this time it is after the sudden loss of their parents. Back together, they rally around their younger sister and the family vineyard. The first Kincade up to bat is Jordan. I loved him... A hockey player with a heart of gold? Yes, please. From the moment he learns the news of his parents, Jordan knows that it is time to come home. What he doesn't expect is to find Lucy Diamond, a woman whose heart he broke in high school. Lucy is a bit torn... The attraction between her and Jordan is undeniable. Not believing that she is worthy of Jordan's attention, she tries make light of their budding feelings and even ignores it at times. True to his feelings towards Lucy, he would flirt and turn on the charm until she can no longer resist. Their romance reminded me a lot of the Sugar Shack series because of how sweet and almost innocent it was. Jordan woo'd Lucy and wanted to bring a smile on her face more than anything. He wanted to give her all of the things Lucy missed out on, whether in high school or with her marriage. I had a silly grin on my face for pretty much the entire book. I adored every moment. From her characters to the fabulous writing, I fell in love with A Better Man from the very first page. I'm not sure which of the Kincade brothers will be my favorite yet, although I am leaning towards Declan, but I'm going to have a hell of a fun time getting to know each of them. 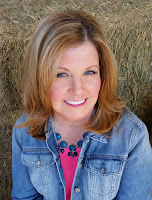