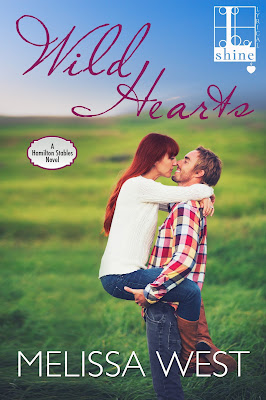 In the lush heart of Kentucky, horse racing is king, and the Hamilton family is royalty, born to produce champions. Maybe that’s because they understand wildness better than most…

Charming, reckless, and restless, youngest brother Alex Hamilton has a reputation for sweet talking his way into any woman’s arms—and failing at anything to do with the family business. So when he commits to managing their new breeding operation, it’s under one condition: he’ll focus on work and nothing else—no distractions, no fun…no women. But just when Alex has promised to keep his hands to himself, sweet, sexy Kate Littleton gallops away with his heart…

Kate knows Alex isn’t the long-term type—he proved that in a lot of delicious ways when they first met more than a year ago. But seeing him blazing with new dedication to Hamilton Stables, she can’t deny that he’s miles ahead of any other man who interests her. The attraction between them is electric right out of the gate, but it will take an unexpected loss to put them back in the race and headed for a passionate future together…

This book is a standalone novel in a series of standalones.

“’Bout damn time.” Trip walked out of the foaling barn, his Stetson firmly planted on his head, the same cowboy boots he always wore around the farm on his feet. A red-and-black plaid shirt hung loose over his Levis, and though to some he might appear to be an ignorant hick, those in the business knew the truth: Trip was the best trainer in horse racing.

Among owners, Alex felt the weight of his brother’s name following him around like a dark shadow that refused to lift. He introduced himself, and immediately owners asked, “Trip’s brother, right?” He’d have no choice but to agree, but for Christ’s sake, there were three Hamilton brothers, not one, and it was time he and Nick receive the respect they deserved.

Pushing aside his bitter thoughts, he opened his mouth to say that he wasn’t late, Trip was early, but then he noticed the two women standing a few yards away from his brother, and suddenly Alex’s throat refused to work properly.

“Hey, there. Doing okay today?” Emery, Trip’s fiancée, asked him as she started over. At five foot nothing and barely over a hundred pounds, she looked like a child beside Trip, but her size fit her job well. She was a rider for Hamilton Stables, and her father was the legendary Hall-of-Fame trainer Beckett Carlisle. Which meant Trip and Emery’s relationship owned the title of most unexpected match, but there they were, head over heels in love, wedding date six months away.

But while his eyes were on his future sister-in-law now, she wasn’t the woman who’d caught his attention.

His gaze drifted over and refused to lift from the bright redhead beside Emery, her skin as fair as milk except for the occasional freckle. Her eyes were so intensely blue Alex found it difficult to look at her without his mouth falling slack. She wore a simple blue and white cotton dress that hit midthigh, her look so out of place on the farm a normal woman might feel self-conscious, but Alex would bet this woman had never felt self-conscious a day in her life. Why would she? To date, he’d never met a woman who held a candle to her.

“Alex,” she said, her voice soft, a hint of modesty there that he’d never understood but cut through him all the same.

Kate Littleton stared at the man she’d had sex with not eighteen months before, curious if he still looked the same underneath his perfectly fitted T-shirt and jeans.

She tried to remember why she’d ended their dating streak, and then the memory came to her like a spoon full of vinegar. Alex had freaked out when Trip and Emery became serious. Something about complications and awkwardness and other words that really meant freak-out on aisle seven. No really, it meant he had no real feelings for her anyway, which was fine, she was fine. Great, even. But the part that had always gnawed at her was that she didn’t want anything from him beyond a chance to spend time with him. Just his time, and was that really so much to ask for?

See, despite the arrogant vibe he put out there, Alex was a genuinely sweet and funny guy. She enjoyed being around him, enjoyed his laugh, enjoyed the way the conversation never became stilted. He had a carefree spirit and a sharp mind that could fascinate her with a single comment, then he’d smirk like he knew just what he’d done.

But Alex just didn’t see himself clearly. Shadowed by his brothers, he’d spent his whole life climbing a hill that only rose higher with each step.

But instead of telling him as much or trying to make him see, she’d said goodbye. She’d rather turn him loose than trust her heart to keep its word to her and remain unaffected.

So one day they sat on his couch watching the Falcons play, both of them screaming at the TV and laughing like old friends, and the next day he was a stranger.

Eighteen months had gone by without a word, which was fine. Completely and totally fine. Kate had things to do. Students to teach. Plays to plan out. Little league games to attend. She didn’t need Alex Hamilton, but she did want someone. She wanted the movie experience, the soft kisses and walks on the beach and happily-ever-afters.

If only she could find the right man to fill the job.

Melissa West writes heartfelt Southern romance and teen sci-fi romance, all with lots of kissing. Because who doesn't like kissing? She lives outside of Atlanta, GA, with her husband and two daughters and spends most of her time writing, reading, or fueling her coffee addiction.