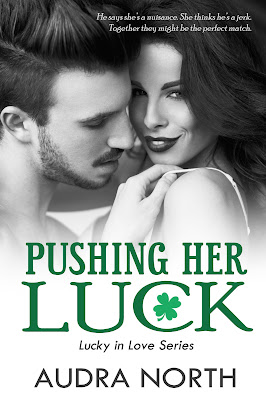 Pushing Her Luck
Lucky in Love #1
Audra North
May 9, 2016
Self-Published

He says she’s a nuisance. She thinks he’s a jerk. Together they might be the perfect match.

Riordan Faraday is about to reach his breaking point. He’s got art classes to teach, a needy mum to care for, and most importantly, a painting to finish. But without time or inspiration, he hasn’t been able to paint a thing and it’s driving him mad. So when a silly American girl shows up on his doorstep with a wild proposal, he shoots her down perhaps a bit more harshly than she deserves…but it’s for the best. He can’t afford any more distractions at the moment, especially not beautiful brown-eyed ones.

Samantha Meyer—Sam, to her friends—is on a mission to find her late grandmother’s necklace. The long-lost piece of jewelry is the only thing she has left of Gram and Sam is determined to see that dream fulfilled before she returns home to New Jersey and takes up the reins of the family business. But she wasn’t counting on a sexy, surly painter to stand in her way.

Riordan set down the palette with a growl. Even if he hadn’t already had a morning from hell, that goddamn doorbell would be much too cheerful-sounding. He made a mental note to get it changed, grabbed a rag from the easel, and stole one last irritated glance at the blank canvas in front of him.

“Piss off,” he muttered under his breath. But, then, louder—

He swiped the rag at the oil paint on his fingers as he walked toward the front door of his small cottage, but cleaning it off was nearly impossible without turpentine. Christ. He’d managed to paint absolutely nothing since February, yet here he was, about to answer the door to God knows whom with the stuff all over his hands simply from holding the palette.

Though, really, the person at the door was probably just Mum, coming ‘round again on his day off, in spite of him telling her time and again that he needed to get these paintings done and would it be really be such a lot of trouble to let him alone from time to time?

Except…no, it couldn’t be one of those ladies, since Frank McEvoy’s mum had already been by to try her hand at seducing Riordan this year, back in March. Riordan shuddered at the memory and prayed that this visit would not double the average annual number of inappropriate advances made on him by married women.

He slid the bolt back. Turned the knob. Slowly pulled the door open…

“Hi!” A pretty young woman stood on the other side, practically bouncing on her toes and grinning at him like he was supposed to have half a clue who she was. Wait. Oh God. Was he supposed to know?

He took a second to study her.

Long, strawberry blond hair gathered back in a ponytail that swayed back and forth as she bounced. Medium height. Young. Maybe twenty four? Twenty five? Though her apparent youth might simply be due to her being so chipper and wide-eyed. Wide brown eyes—

Hmm, interesting. A ginger with brown eyes. Not a combination he’d been expecting, but the effect was striking. In fact, he revised his earlier judgment. She wasn’t pretty. She was quite pretty.

Though a tad bit exuberant for his taste.

Before he could so much as open his mouth to inform her that he had no idea who she was, she spoke again.

“I’m Samantha Meyer. I’m from America. Which you can probably tell from my accent.” For some reason, she pointed to her mouth, which he supposed was to indicate the aforementioned atrocious American accent, but the motion had the added effect of calling attention to her rather plump, sweet lips. He found himself fighting the urge to subtly flex his arm muscles in a correspondent display.

“I mean, I don’t think I have an accent. But I guess I do, for you. Since we’re in Ireland and all. Anyway, nice to meet you.”

Were all Americans like this? The ones he saw on the telly didn’t seem half as daft. But then she blinked oddly, and it took him a second that she was holding out her hand, waiting for him to take it.

Never let it be said that the Irish aren’t a hospitable lot.

Slowly, he extended his own hand to meet hers, fingers curling around her small palm. Her skin was warm and her grip was firm, and for a brief moment, a shudder of arousal went through him at the contact.

He still hadn’t said a word.

“Oh, check that out!” She was staring down at their joined hands.

What was she on about now?

“You have paint on your hands. Are you a painter? I mean, an artist painter. Not a house painter. Though that’s cool, too! I’m not trying to say that’s a bad thing. I’m just curious because I used to want to be an artist painter but I really can’t even draw to save my life.”

Good God. How was it possible for a person to natter on so?

“I even failed art in fifth grade. I don’t know if you remember fifth grade, but it’s really, really hard to fail art when you’re that age.”

She looked up at him, and it took a few beats of silence before he realized that she was finally, finally giving him a chance to reply.

“Impossible, in fact,” he snapped.

Her face fell, and she jerked her hand from his, looking stunned.

Shit. He hadn’t intended to hurt her.

Perhaps, if the muses had been a bit more charitable toward him this morning, he might have at least been polite. Possibly, if he hadn’t checked his e-mail immediately upon wakening and read that fantastically enraging message from Michael, he might have sent her on her way with a half-smile and a Have a good morning, then.

But as it was, this…American—who wasn’t his mother, who wasn’t offering him sex, and who seemed to be completely ignorant of the fact that one doesn’t go calling at half seven in the morning—had come to his home and interrupted his painting (fine, his attempt at painting) for no other purpose, it seemed, than to spout utter nonsense about accents and house painters.

Though she was quite pretty. 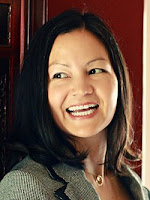 Audra North is the contemporary romance author of the Pushing the Boundaries series from Samhain and the Hard Driving series from St. Martin’s. Sign up for Audra North’s newsletter to get free books, extra scenes, and exclusive subscriber giveaways. You can also connect with Audra on her website, AudraNorth.com, on Facebook, and on Twitter.