Spotlight: Desire After Dark (The McCarthys of Gansett Island #15) by Marie Force 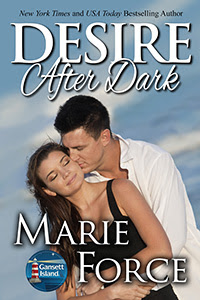 Desire After Dark
The McCarthys of Gansett Island #15
Marie Force
May 23, 2016
HTJB, Inc

Tobias “Slim” Jackson has the perfect life as a pilot on Gansett Island in the summer and in Florida in the winter. He’s happiest when he’s in the air, or at least that was the case before last summer when he met Erin Barton, Gansett Island’s newest lighthouse keeper. Now he can’t seem to find his usual enthusiasm for flying, winter in the sunny South or anything that doesn’t include her.

Erin has been stuck on pause since she lost her twin brother. She’ll tell you herself that her life has been a hot mess since Toby died. After dropping out of law school, she’s flitted from one pointless job to another, existing rather than truly living. Then she comes to Gansett Island to take over as the new lighthouse keeper and meets Slim, who happens to share her beloved brother’s first name. That small coincidence is enough to convince Erin that she needs to spend more time with the dashing pilot—except for the fact that he’s spending the winter more than a thousand miles from her.

Now Slim’s come home to Gansett for the holidays and to hopefully pick up where he left off with Erin. He’s got twelve days before he’s due back in Florida to finish out the remainder of his winter obligations. A lot can happen in twelve days, but will it be enough to convince Erin that it’s time to start truly living again? Read Slim and Erin’s story and catch up with the rest of the Gansett Island cast in Desire After Dark!

On the morning after Slim Jackson came home to Gansett Island, Erin Barton awoke to the scents of his cologne and starch on the dress shirt he’d worn to the McCarthys’ anniversary party. At some point, he’d discarded the suit coat he’d been wearing when he arrived.

She didn’t remember falling asleep with him on the sofa, or how they’d ended up snuggled together under a blanket. His chest made for a comfortable pillow, and his arms around her had kept her from tumbling off the sofa during the night. The last thing she recalled was kissing him—soft, flirty kisses that hadn’t gone much beyond lips stroking lips, with the promise of more to come.

The thought of that promise had her skin tingling with awareness of the man sleeping next to her. After they’d connected last fall, he’d left the island to work in Florida during the off-season. She’d been counting the days until she could see him again, which wasn’t something she did very often. In fact, she couldn’t recall the last time she’d looked forward to seeing any man.

Before he arrived last night, she’d tried to prepare herself for disappointment. Maybe the connection they’d forged months ago in person and maintained through texts and phone calls and FaceTime chats would’ve waned in the many weeks they’d spent apart. But it took only a few minutes in his magnetic presence to know the opposite was true.

Their connection was alive and well, and they had twelve days together to explore where it might lead. Though she’d enjoyed their many entertaining conversations over the last few months, Erin didn’t know where she wanted their “flirtation” to lead. She hadn’t been seriously involved with a man in years and wasn’t sure she had what it took to be in a relationship anymore—or if she even wanted a serious entanglement at this point in her life.

The last man she’d been serious about had been during law school, before she lost her twin brother in the 9/11 attacks on New York City, and her carefully crafted life fell apart in the aftermath of unimaginable loss. By the time she came up for air, the man she’d once planned to marry was long gone, not that she could blame him. The poor guy had tried, Lord knows he’d tried, but there had been no consoling her.

Thinking about those dark days was never a good idea, especially today when she had something far more positive to focus on. She moved carefully to disentangle herself from Slim’s embrace, hoping he would sleep awhile longer. He’d been tired last night from the long day in the air, flying from Florida to Rhode Island for the McCarthys’ party—and to see her.

Erin went upstairs to make herself presentable. She also couldn’t recall the last time she’d spent the night with a man. It had been a while, long before she moved to Gansett Island hoping to jumpstart her stalled life.

If the first few months on Gansett were any indication, the move had been a good one. Thanks to her close friend, the former lighthouse keeper, Jenny Wilks—now Jenny Martinez—Erin had been introduced to an amazing group of new friends. And she’d met Tobias Fitzgerald “Slim” Jackson Junior, the sweet, sexy pilot who’d come to her rescue after she sprained her ankle on a dark island road last September.

Thinking about that night made her feel giddy and breathless, which was silly, really. At thirty-eight, she was far too old for such foolishness. Regardless, he’d charmed his way into her life that night. He’d been dropping in regularly ever since, mostly via phone, text and FaceTime, until last night when he showed up in person, sparking more of that giddiness that seemed to happen any time he was around.

He’d met her parents at Jenny’s wedding in October, and they’d immediately adored him and tuned in to the crackling attraction between them. That had been a great night, capped off by a magical good-night kiss when he brought her home. But then he’d left the island for three months to work in Florida, and Erin had been surprised by how much she’d missed him.

He’d been a terrible flirt from that first night. Thinking about what he’d said to her the second night could still make her shiver all these months later. After she’d agreed to have dinner with him—once she was off the crutches—he’d stated his intentions rather boldly.

“I’m also persistent. If you’re going to make me wait until the crutches are gone, I guess I’ll have to come by to visit every day and make a pest of myself so you don’t forget about me.”

“You’re going to drive me crazy, aren’t you?”

“Baby, that’s the very least of what I want to do with you.” 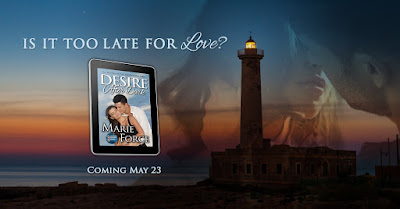 Click HERE to check out the entire
The McCarthys of Gansett Island series.

Her goals in life are simple--to finish raising two happy, healthy, productive young adults, to keep writing books for as long as she possibly can and to never be on a flight that makes the news. 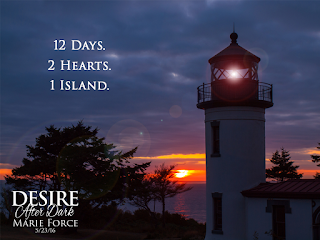