Spotlight: One Night with the CEO (The Suits Undone #2) by Mia Sosa 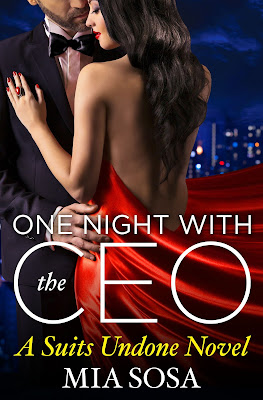 After some disappointing dates, Karen Ramirez has concluded that great sex is for other people. Especially since medical school won't leave her much time for romance anyway. Then she runs into tall, dark, charming, and ridiculously wealthy Mark Lansing--and quickly reconsiders celibacy. Adding to temptation? Mark will be the best man at her sister's wedding and the nuptial destination is sultry Puerto Rico. Now this trip might just be sensory overload--or the perfect chance for Karen to find the groove she's never had.

For CEO Mark Lansing, his perfect match would be smart, sweet, and funny, with long legs and silky hair the color of dark chocolate. In short, someone a lot like Karen. But Mark's looking to settle down, while a relationship is the last thing on Karen's mind. So Mark proposes a plan: he and Karen will use their weekend in paradise to sizzling advantage--before downshifting to friendship. The only problem? Karen is all Mark can think of when he gets home. Now his most challenging negotiation will be for the one thing money can't buy...

He continued to massage her toes. “Sexually.”

She opened her mouth to answer him, but her brain had abandoned her.

“Relax. We’re just talking. Titillating discussion without having to do the walk of shame in the morning. You liked that idea, remember?”

Yes, she liked the idea, but what could she say? Hell if she knew what she liked. No one had ever bothered to worry about her pleasure, and she’d been too chicken shit to tell them what turned her on. “Honestly? I’m not sure.”

His face blanched, and his hands stopped moving. “You’ve had sex before, right?”

Pfft. Of course she had. But the experiences hadn’t been enough to shut off her brain and stop her from blurting out ill-conceived observations. “Yes, I have.”

“Tell me. I know there’s something you want to say.”

“You dip your head to one side and rest your chin on your shoulder, like you want to bury your head in your own neck. You did it before.”

Would it be so bad to share her tics with a complete stranger? One she’d never see again? She didn’t see any harm in it. “Well, the thing is, I tend to lose my concentration during sex, too.” She shook her head, knowing she wasn’t explaining herself well. “No. It’s more like I tend to think about the wrong things. Or a million things other than sex.”

He ran his fingers down her shins and squeezed her ankles. “Give me an example.”

Karen shifted her torso away from him and covered her face with her hands. “It’s too embarrassing.” She peeked through her fingers. “Wait. Are you a therapist or something?”

He lifted a dark brow and shook his head no. “Hardly. We’re just talking. And then you’ll go off to your life, and I’ll go off to mine.”

Right. Exactly. “Okay, here’s an example. The guy says, ‘You’re so wet,’ because, you know, they all say that, and then my brain takes over. And I ask myself, ‘Am I? Am I really? Or are you too small? Because I have to say, you’re starting to feel like a tampon.’”

He laughed. A deep, rich laugh that made her want to lean over and surprise him with a kiss. He wasn’t broody at all. A man who laughed like that, his neck stretched to reveal his Adam’s apple and his eyes gleaming in appreciation, could never be broody. Thoughtful? Yes. Broody? No.

“Oh, and I’ll never forget the first time a guy went down on me. He lapped at me like a poodle drinking from a water bowl, and I felt nothing. ”

Mark’s shoulders shook after she shared that tidbit.

“I ended up trying to memorize physics formulas until he was done. But that’s not all,” she continued. “Sometimes I forget that I’m not supposed to articulate my thoughts, or I zone out, and before I know what’s happening, the guy, who is rightfully pissed or hurt, scrambles for the door.” She removed her feet from his grasp and set them on the floor. Staring at her toes helped her avoid his gaze. “I feel awful. No one should feel inadequate like that, but I can’t seem to help myself. And I’m starting to wonder if it’s me. You know what I’d love? I’d love to be able to lose myself in the moment, but it’s never happened.” She shrugged her shoulders. “Someday maybe.”

She didn’t know what reaction she’d get. Sympathy? Ridicule? Whatever she got, it wouldn’t matter. This was about her, not him, because that was the point of catharsis, after all. But when she dared to peek at his face, she nearly fell back against the chair. Lust. There it was. It seeped out of his pores. Darkened his brown eyes to black. Made his big body move with each breath he took. Caused his jaw to go slack.

When he finally spoke, his voice carried a touch of gravel, a rough sound that she figured only hinted at what he really wanted to say. “What you said just then. Wanting passion that would make you lose all thought and admitting you’ve never experienced it? That’s like waving a flag at a bull. God, there’s not much I wouldn’t do to get you under me if that’s what you wanted. To get you to the point where all you could think about was me. Us. How we fit together. How we moved together.”

His words worked their way into her body, filling empty spaces she didn’t know she had. What he’d just described? She wanted that, too. She hadn’t realized how much until his words had mirrored her thoughts. She burned with the need, in fact. And she squirmed in a feeble attempt to disguise the heat that suffused her. But this was crazy. They’d just met. Her gaze darted around the alcove, the flashy surroundings reminding her that the feelings he’d provoked in her weren’t real. It had to be the whiskey. The craziness of the night.

Mia Sosa was born and raised in New York. She attended the University of Pennsylvania, where she earned her bachelor's degree in Communications and met her own romantic hero, her husband. Mia once dreamed of being a professional singer, but practical considerations (read: the need to pay bills) led her to take the law school admissions test instead.

A graduate of Yale Law School, Mia practiced First Amendment and media law in the nation's capital for ten years before returning to her creative roots. Now, she spends most of her days writing contemporary romances about smart women and the complicated men who love them.

Mia lives in Maryland with her husband and two daughters and will forever be on the hunt for the perfect karaoke bar.

Posted by CrystalBee at 1:44 PM