Spotlight: Temptations of a Wallflower (The Wicked Quills of London #3) by Eva Leigh 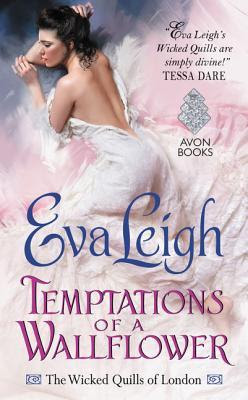 Temptations of a Wallflower
The Wicked Quills of London #3
Eva Leigh
April 26, 2015
Avon

Tasked with unmasking London’s most scandalous author by his powerful family, Jeremy has no idea that his beautiful, innocent bride is the very woman he seeks to destroy. His mission must remain a secret, even from the new wife who stirs his deepest longings. Yet when the truth comes to light, Sarah and Jeremy’s newfound love will be tested. Will Sarah’s secret identity tear them apart or will the temptations of his wallflower wife prove too wicked to resist? 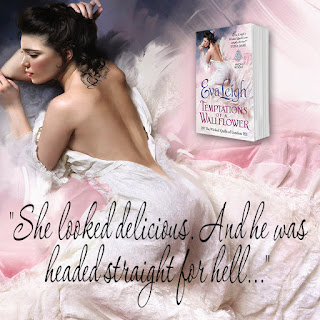 Now it was her turn to laugh. “I’m hardly enviable, Mr. Cleland.”

His expression shifted to thoughtfulness. “I wonder why you might say that.”

“I have…everything a woman could want,” she acknowledged, matching her stride to his.

“Wealth, position. If there’s a material thing that I desire, I simply have to ask, and it’s mine.” She shook her head. “And I’m grateful for these things. I truly am. And yet…”

“And yet…?” he prompted gently.

“It comes at a high price,” she admitted.

“What is that price?”

She considered this. Never before had she spoken so openly to anyone. Not her friends, or her family. But here, now, to be with this man, and to consider the foundations of her life, was both odd and deeply right. At last, she said, “Freedom.”

He contemplated her perceptively. “Must be very restricting,” he murmured. “The responsibilities of your position in society. Not to mention the fact that you’re a woman.” He blushed a little at that word.

It was a charming—but also gently erotic—blush. Her own cheeks warmed.

He continued, “You haven’t the liberty that a man in your place might have.”

“Indeed, no.” She gave a small, strained laugh. “You must think me dreadful to take issue with my admittedly fortunate circumstance.”

He fell briefly silent. “I know a little about having one’s role be predetermined.” They stopped walking, and she gazed up at him. Cool sunlight carved hollows in his cheeks and gilded his eyelashes. “Being a vicar means I must be a model to everyone in my parish. I have to be more pious, more humble, more self-sacrificing. I have to be better at everything while also being deferential. I certainly cannot admit to being an ordinary human man.”

Their gazes held at that word, man. Awareness of him sizzled. His height, his physicality. That suppressed desire. Her own body warmed in response.

She tiled her head to one side, imagining what it must be like to live such a restrained life. “Sounds exhausting.”

“Not unlike being a duke’s daughter, I imagine.” He smiled at her, and that lush warmth continued to gathered through her.

“I never would have thought I’d have much in common with a vicar,” she said with a laugh.

“Nor I with you,” he answered, his smile softening. “But here we are, in this garden.”

“So we are.” Strange how the world worked, that she discovered a man such as him on a day that had started out so perfectly ordinary. It was almost…miraculous. Did miracles happen? She went to church as a matter of form, not faith, though the ritual gave her comfort. Still, it was a revelation to learn that men of God were mortal just like anyone else, with the same needs and frustrations anybody might experience.

She ought to have imagined as such. She often imbued people in her mind with hidden motivations and secrets. He was no exception.

“And does your…wife…feel as you do?” She inwardly grimaced at her lack of tact, but she needed to know whether or not he had someone with whom he could confide. It seemed a shame, a right shame, that he should be alone in this world.

“No wife, I’m afraid,” he said with a self-deprecating grin.

A strange relief shot through her. She reasoned that it must be because it wouldn’t do to flirt with a married man. “Stick around the London Season long enough,” she replied. “An earl’s son, with a living? You’ll make someone a fine catch.”

“I’m just a humble country vicar,” he answered. “Hardly the stuff of a doting mama’s dream for her daughter.”

“You might be surprised.” Without a doubt, she and Mr. Cleland could never be a match. Even if she wanted to marry, he stood too far beneath her to warrant any possibility of courtship. Duke’s daughters and vicars—though they might be sons of earls—made for an improbable, mismatched pairing.

But damn and all the other curse words she wasn’t allowed to use—she liked Mr. Cleland. The way his mind worked, how he spoke to her like a person of equal intelligence, the sensual quality within him. It wasn’t all her writer’s fancy. Something burned in him and it lured her closer, closer, drawn toward the mysteries of this man. Even Lady Josephina wouldn’t find someone half as interesting in her adventures.

And…he was exceptionally attractive. In a way she’d never experienced with another man before. She’d met handsome gentlemen in the past, but Mr. Cleland lit a spark within her, low and hot.

A shame, really, that Sarah couldn’t have been someone else. Because, if she had…she might give him serious consideration.

But that was never to be. She was who she was, and he was who he was, and they would have to be friends—nothing more.

So absorbed was she in this thought, that she didn’t hear footsteps approaching until they were almost upon her. Turning, she saw her mother coming down the path, wearing a pinched expression.

“There you are,” Lady Wakefield said impatiently. She nodded at Mr. Cleland, barely acknowledging him. Sarah felt a small stab of shame at her mother’s rudeness. But a vicar didn’t warrant much attention. “This sun has given me a headache. It’s time to go.”

“Yes, Mama.” Before the words had left her mouth, her mother had spun on her heel and strode off back toward the main house.

“Nothing to apologize for,” he said easily, and it was clear he meant it. He bowed. “It was a genuine pleasure to meet you, Lady Sarah.”

“I feel the same way.” They smiled at each other. For a long time, neither, it seemed, willing to move away.

“Now, Sarah,” her mother called out.

Sarah sighed. Her gaze drifted back to the hedge maze. Could she drop her fan? As they both bent to retrieve it, she might whisper to him an invitation to meet her there in a few moments. And then… She could taste those gently curved lips of his. Oh, she’d experienced a few chaste kisses before, but never anything she truly desired. But she wanted to kiss Mr. Cleland. She craved feeling his mouth against hers, and seeing if her imagination was correct about him.

He, too, looked at the maze. Was he thinking the same thoughts? Did he want to savor her? A delectable thought, one that made her feel both languid and powerfully alive all at once.

He was thinking of kissing her! 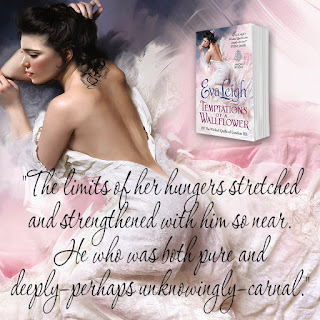 EVA LEIGH is the pen name of a RITA® Award-nominated romance author who writes novels chock-full of smart women and sexy men. She enjoys baking, Tweeting about boots, and listening to music from the ‘80s. Eva and her husband live in Central California.