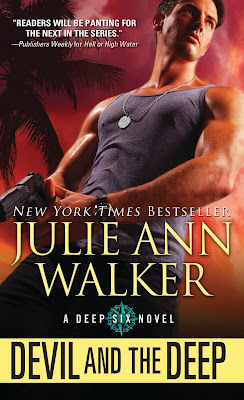 A COVERT MISSION
Maddy Powers’s life revolves around cocktail parties, political fundraisers, and charity events — but she can’t forget the daring former SEAL who appropriated her father’s yacht a few months ago … or the scorching kiss they shared before he disappeared into the deep blue sea.

SPARKS A FLAMING DESIRE
Bran Pallidino carries a dark secret behind his lady-killer eyes — one that keeps him from pursuing a serious relationship with Maddy. But when she’s taken hostage during a trip to the Dry Tortugas, the men of Deep Six Salvage drop their treasure hunt for a sunken galleon and embark on a dangerous mission to save Maddy.

WITH EARTH-SHATTERING REPERCUSSIONS
As they fight her merciless kidnappers, they discover this isn’t a simple hostage situation, but something far more sinister. Passion boils between Bran and Maddy, but what good is putting their hearts on the line if they don’t survive the dawn?

That was Maddy’s world. Even so, time seemed to slow to a lame man’s crawl and she felt like she was seeing everything through one of those children’s 3D View-Master toys. She wasn’t pressing the little handle on the side to spin the disk of pictures, but the frames were still flicking in front of her unblinking eyes.

The body of the unmasked man lay on the sand beside her. Blood slowly seeped from his lifeless corpse and headed in a gruesome red river toward the waiting arms of the ocean.

The three gunmen rained lead death on the seawall as they pulled the girls with them up the beach and toward the narrow bridge that led across the moat into the fort.


Bran raced through the surf. His broad shoulders, exposed by his black tank top, flexed and bunched. His big thighs churned as he halved the distance between them. Even in the chaos, she was struck by the sheer impact of him. Long, lean muscles made for endurance. Big, thick bones designed to keep him standing tall for decades. Deeply tanned skin that glowed with health and vigor and highlighted his Italian-American heritage. Her mind touched on a line she’d read from an Italian poet in college, Francesco Petrarca. He’d written, Rarely do great beauty and great virtue dwell together. But he couldn’t have been more wrong. At least when it came to Brando Pallidino. Because Bran was all things beautiful and virtuous, a real-life, honest-to-God hero.

Glory be and hallelujah! She needed a hero to help her get the girls away from those awful men.

He skidded to a stop beside her. And then her world stopped doing that weird stop-action thing. Everything sprang into high definition. Including Bran’s face.

Before he turned to take aim at the masked men, she caught a glimpse of his dark eyes, and her thundering heart ground to a halt, her blood turning to ice water in her veins. She recognized that look. It was same one he wore the day he stormed her father’s yacht and put a bullet in the brain of the terrorist holding her hostage. The look of a man who had killed and would kill again. A man filled with dark purpose. A man who…frightened her.
Which was silly. Bran was all things good and valiant. And yet…

She shuddered at the difference between this Bran and the one who talked her through her bad times, the one who liked to tease her and taunt her and fill her inbox with videos of Meat, the bulldog, snoring so loudly it vibrated the canine’s jowls. It was almost like there were two Brans. Darling Bran and Deadly Bran.

“Flat on the ground!” he bellowed over his shoulder at her and Rick.

From the corner of her eye, Maddy saw the young park ranger face-plant. Bran in full-on SEAL mode was not the type of guy you ignored. And as much as she despised getting sand stuck between her teeth, she belly flopped right alongside Rick. The beach was cold and wet and smelled of fish. The tiny, crushed shells interspersed with the sand scratched her cheek when she turned her head to keep her eyes focused on the helter-skelter scene.

“Let ’em go!” Bran thundered, his deep voice echoing over the dark water and bouncing against the brick walls of the fort and the seawall.

“Go fuck yourself, you sonofabitch!” the tyrant who’d been terrorizing Sally Mae, and who now held her in front of him, shouted between the intermittent volleys his cohorts sprayed at the seawall in an effort to pin down the Deep Six Salvage crewman who was obviously hiding there.

“Let the girls go, or end up like your friend here!” Bran yelled.

As if to punctuate his point, or else simply to add insult to injury, he nudged the dead man’s body with his foot. The move caused fresh blood to erupt from the wide hole in the corpse’s chest. More dribbled from his slack mouth to pool in the ear closest to Maddy. It was so dark and thick that it reflected the glow of the moon.

Jesus Christ and all his followers!

Once again her lunch was threatening an encore performance.

“I can knock the beak off a chicken at two hundred yards. Which means I’m gonna give you to the count of three to let that girl go! If you don’t, I’ll send you straight to your Maker with a bullet between your eyes! And then I’ll do the same to your two friends!”

“You’re bluffing!” the tyrant called, still easing Sally Mae backward. The girl’s eyes begged Maddy for help. And it killed her that all she could do was lie there and watch. Her hands, still tied behind her back, curled into claws with the urge to scratch the tyrant’s evil eyes right out of his head.

“I might be bluffing, you miserable, vomitous mass!” Bran yelled. Oh, for heaven’s sake. Really? He’s quotin’ The Princess Bride? “But if you wanna test me,” he added, “I’m your huckleberry!” And now he’s quotin’ Tombstone. “Last chance to let the girl go!”

The tyrant ignored him and continued to backpedal toward the fort.

True to his word, Bran began to count. “One!” The word exploded over the beach like an atom bomb. “Two!”

Maddy bit her tongue to keep from crying out. In the next second, Bran would let his bullets fly and she prayed he was as good as he claimed to be.

The sand around Bran’s bare feet erupted with a hail of gunfire as the man holding Louisa suddenly turned his aim away from the seawall and opened up on Bran. Bran spun like a top just as the fabric on the left leg of his cargo shorts shredded.

“No!” Maddy screamed when something hot and sticky sprayed across her face. Then the world went black. All the air was punched from her lungs. And a terrible, suffocating weight fell over her.

For a split second she wondered if she was dead. Did I get hit in the head? Is this what the afterlife feels like? Dark, airless pressure? But then familiar smells tunneled up her nose. Irish Spring soap and Tide laundry detergent. Bran…

He’d thrown himself on top of her, sacrificing himself to shield her from the melee of flying lead.

Click HERE for more info on the
Deep Six series.

Julie Ann Walker is the New York Times and USA Today bestselling author of the Black Knights Inc. romantic suspense series. You can find her on her bicycle along the lake shore in Chicago or blasting away at her keyboard, trying to wrangle her capricious imagination into submission. She lives in Chicago, IL.

a Rafflecopter giveaway
Posted by CrystalBee at 2:01 PM