Spotlight: The Duke of Daring (The Untouchables #2) by Darcy Burke 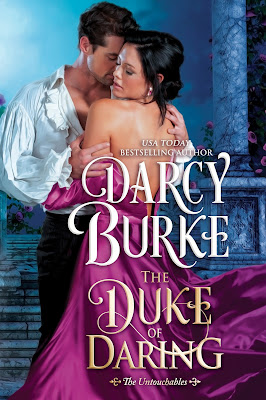 The Duke of Daring
The Untouchables #2
Darcy Burke
July 5, 2016
Self-Published

Miss Lucinda Parnell is out of money. A dismal failure at the Marriage Mart, she’d just as soon leave Society far behind. Desperate to earn funds to retire with her grandmother to the country, Lucy disguises herself as a man to gamble in London’s hells. But the Earl of Dartford, an Untouchable she never imagined speaking to let alone spending time with, is onto her in a trice. When he insists on acting as her protector, Lucy fears her chance to remain an independent woman is destined to go up in flames.

After losing his entire family, Andrew Wentworth, Earl of Dartford built a wall to keep attachments at bay. He believed he could keep Miss Parnell safe without compromising his defenses, but she’s exciting and irresistible. Their deepening relationship makes him even more determined to push her away. Nothing will stop him from trying to avoid reliving the anguish of loss. Love is the one risk he doesn’t have the heart to dare.

He led Miss Parnell toward the dance floor. “Why didn’t you want to dance with me?”

“Don’t take it personally. I don’t like to dance with anyone.”

He glanced down at her. “Not a very good dancer?”

She sucked in a breath and then laughed. He liked that sound. Almost as much as he liked watching her animated face. “I’m an excellent dancer.”

She rolled her eyes. “I suppose you’re superior on the dance floor. You don’t seem to have any deficiencies.”

He grinned, enormously pleased with her observation. “I’m so glad you noticed.”

The set finished, and the music started for the next dance. A waltz. Andrew couldn’t believe his good luck.

Miss Parnell’s nostrils flared. It was a slight reaction, but Andrew caught it.

“What’s the matter?” he asked.

“I haven’t waltzed very much. I wasn’t paying attention to the sets, otherwise I would’ve told you I couldn’t dance this one.”

He lightly clasped her waist and took her hand. “I thought you said you were an excellent dancer.”

She scowled at him as she curled her fingers around his and placed her hand on his shoulder. “You are most ungracious.”

He laughed again, enjoying her immensely. “Come now, surely if you can shoot a gun with deadly accuracy, you can’t let a waltz defeat you?”

She squared her shoulders, which drew his attention to her chest. Though she wasn’t well-endowed, she was nicely formed for her frame, and the bodice of her raspberry silk ball gown fit her to perfection.

“No, I shan’t. I’m invincible, don’t you know?” She gave him a saucy look, and he was completely enchanted.

They moved with the music, and he was glad he remembered how to waltz. “I have a confession to make. My waltzing experience is rather limited as well.”

He laughed again. “That’s ironic coming from you.”

She lifted a shoulder. “One might say I’m uniquely qualified to recognize deception." 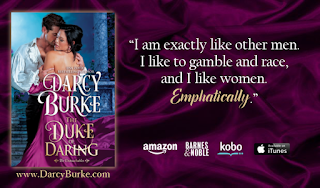 Darcy Burke is the USA Today bestselling author of hot, action-packed historical and sexy, emotional contemporary romance. Darcy wrote her first book at age 11, a happily-ever-after about a swan addicted to magic and the female swan who loved him, with exceedingly poor illustrations.

A native Oregonian, Darcy lives on the edge of wine country with her guitar-strumming husband, their two hilarious kids-who each seem to have inherited the writing gene in some form-and two Bengal cats. In her "spare" time Darcy is a serial volunteer enrolled in a 12-step program where one learns to say "no," but she keeps having to start over. Her happy places are Disneyland and Labor Day weekend at the Gorge.