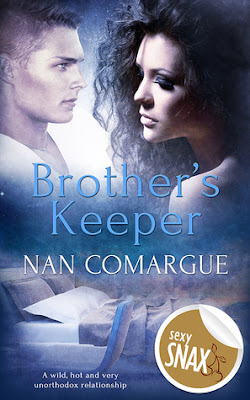 Alexa believed Nik is her half-brother until she visits California for Russian Orthodox Christmas and learns the truth. Then their relationship becomes wild, hot—and very unorthodox.

Nik’s devil-may-care attitude drives Alexa crazy, but because he’s her younger half-brother, she has to see him every Russian Orthodox Christmas—even after he kissed her two years ago and made her feel things that just couldn’t ever be. This year, the holiday starts with Alexa finding out Nik’s not related to her at all, a fact her family has kept from her for decades.

The revelation sends Alexa into a tailspin, and the person who offers her comfort is the last one she expects—Nik. After waking up to find Nik in her bed the next day, that comfort turns into unexpectedly hot sex, which only complicates the burgeoning feelings she has for him.

The last thing Alexa wants is to disrupt her life with a man she can’t trust—a man she already knows she cares for far too deeply. But easygoing Nik proves to be much more determined than she’d ever imagined when their fragile, new love is on the line.

At first glance, I wanted Brother's Keeper to be longer. I loved Nik and Alexa! I wanted to spend more time with them. But as I finished the sexy little novella, it ended up being the perfect length. The sexual tension was like no other. Like a voyeur, I didn't want to look away. Such an explosive relationship that one spark and your Kindle will go up in flames. This is the 3rd novella from Nan Comargue that I've read and at this point, I'll read anything she'll put in front of me. Happily, I might add. If you are a fan of taboo romance with a bit of an age difference, pick this book up!

“Who are you expecting?” Alexa finally asked, sipping tea from Val’s grandmother’s priceless china set. “And why are you so damned nervous about it?”

Val jumped at least an inch off the sofa, violently clattering her tea cup in its saucer. Alexa flinched. She’d grown up being repeatedly told how valuable the china set was and to see it abused just emphasized how strange everything was that day.

“Oh, it’s just Nikky.” Val laughed loudly. “That boy will be the death of my peace of mind.”

‘That boy’ was Val’s twenty-five-year-old son and Alexa’s half-brother. He was also the source of constant grief in Val’s life, which was part of the reason Alexa detested him. But that was only part of the reason.

Alexa wrinkled her nose. “Ugh. Why is he coming? Doesn’t he know that I’m here?”

Val shot to her feet, walking swiftly over to the sideboard so Alexa couldn’t see her face. “Oh, darling, can’t you get along with each other? It breaks my heart to see you drift apart. Sometimes I think you don’t even try to like Nikky.”

“You did once,” Val said, turning back to face her, a small crystal glass now between her fingers. This was the way Alexa knew her, with her favorite tipple always in hand. The tea drinking must be a new ritual, one that didn’t match well with the balmy California weather.

“I’m thirteen years older than he is,” Alexa pointed out. “We didn’t get along because we had nothing in common. Actually, I can’t think of a brother and sister who have less in common, even if we are just half-siblings.”

“Are we really doing this?”

Nik was standing at the door behind his mother, so it was only Alexa who saw the effort the older woman made to smooth out her features before she turned around.

The pure joy in Val’s voice when she greeted her son always brought a lump to Alexa’s throat. Her own mother had died when she’d been a toddler, and it had been a decade before her father had met and married Valentina. As a stepmother, Val was warm and caring, but the passionate love she showed her son was very different in degree.

He looked—as usual, Alexa noted critically—as though he’d just rolled out of bed. His fair hair was tousled and the jeans and T-shirt he wore were incredibly casual and none too clean, yet he gave off enough energy for five men. She could feel it pouring off him, even from across the room.

Nik used only one arm to return the hug. The other hand was occupied with a partially eaten apple. He was constantly eating—to the point where Alexa could barely picture him without some sort of food in hand—yet she conceded that he must need the calories because his tall, lean frame never seemed to gain any extra weight. Val was the same way, though she was built like an elegant greyhound rather than a Siberian husky, but Alexa had to vigilantly watch what she ate.

Nik grinned at Alexa over his mother’s shoulder. “I take it you needed the reinforcements, Mom. What’s Lexy been doing to you now?”

There it was in a nutshell, the reason she hated Nik. His casual assumption that the tension in the room he’d walked into was her fault, rather than part of Val’s inexplicable mood, his unnecessary levity—did the man take anything seriously?—and the fact that that all of his glaring personality flaws had always worked in his favor.

Of course, Alexa now had a more personal reason to detest her half-brother, as if she needed one. She struggled to stay silent. She really did. Nik stared, an interested and amused witness to her internal battle.

“I’m not doing anything!” Alexa burst out. “I just got here. Val was just harping again on the same old things.”

Nik chewed the last of his apple, eating the core and all, which she considered a revolting habit.

The linkage was too intimate but she nodded anyway, feeling foolish for defending herself and annoyed that she had once more found the need to do so.

What was it about her younger half-brother? They simply needed to occupy the same city for her to be all anxious and prickly. Part of the reason she’d moved to Chicago years ago was to escape him, yet she was left feeling that her decision had given him more power than he deserved.

Nik walked over and sat down on the couch right next to her—too close. She had to cling to the arm to avoid tumbling into him. His expression stayed mild as she glared at him. His densely blue eyes usually carried a twinkle, even if it was buried deep inside, as it was now. Why did it often seem as though he was laughing at her? And what, exactly, was the joke?

“Shared blood is an accident of fate,” Alexa said stiffly. “It doesn’t mean that there actually exists a ‘you and me’.”

Val perched on a chair, her thin hand holding the fragile crystal glass as if it were an extension of her arm.

“Oh, Alexa. Must you be so hard-hearted?”

“Me?” Alexa protested, her hand automatically moving to tap her chest. “I’m hard-hearted? What about him?”

A hundred memories rose to the surface of her mind. All the times he’d been the center of attention while she—older and more reserved—had faded into the background. It never helped that he always seemed to want nothing better than to follow along in her wake like a silly puppy. Then, when they got older, how he never introduced her properly, just saying her name, as if they were no relation at all. Or calling her his stepsister, as if the blood tie disappeared at his command. Those small gestures never stopped hurting, not until she forced herself to ignore them.

“I’m friendly and lovable,” Nik said. “The only person who’s never loved me is you.”

“What is there to love?” Alexa muttered, the memories filling her ears with a terrible insistent buzzing. She got to her feet. “Excuse me, but—”

“If you hate me so much,” Nik said, “you’ll want to stay and hear what she has to say.”

Posted by CrystalBee at 9:39 PM