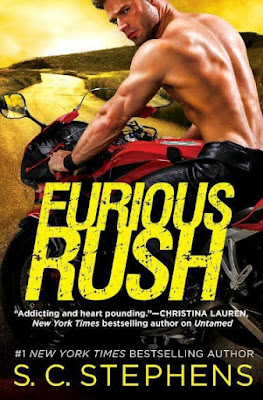 The first in an emotion-fueled, New Adult series from the #1 bestselling author of the Thoughtless novels.

Mackenzie Cox has a lot to prove. Daughter of a racing legend, she is eager to show the world that she has inherited her father's talent in the male-dominated sport of professional motorcycle racing. The last thing Kenzie needs is to be antagonized by her rival team's newest rider, Hayden Hayes. Plucked from the world of illegal street racing, Hayden immediately gets under Kenzie's skin. His insinuations that Kenzie is a spoiled princess who was handed her career fuels her desire to win, and much to her surprise, Kenzie soon learns she performs better when she's racing against Hayden.

As Kenzie and Hayden push each other on the track, the electric energy between them off the track shifts into an intense--and strictly forbidden--attraction. The only rule between their two ultra-competitive teams is zero contact. Kenzie always does her best to play by the rules, but when her team slips into a financial crisis, she has no choice but to turn to Hayden for help. The tension simmers during their secret, late-night rendezvous, but Kenzie has too much to lose to give in to her desires. Especially when she begins to doubt that Hayden has completely left his street life behind...

“What?” I snapped, hoping to sever the connection, to diminish the pinpoints of excitement that were starting to work their way through me. Inch by inch. Ripple by ripple.

Hayden’s gaze shifted to the bubbling water before lifting to mine again. “Can I ask you a serious question?”

I was shocked. Our conversations had never gone much deeper than trading insults, and even though I was curious, instinct made me answer him with, “No.”

My heart started pounding in my chest. I knew exactly what he meant. That fire, that drive, that feeling that we were alone, even when we were surrounded by thousands of people. It had been the most intense race of my career because of that sensation, but I wasn’t about to admit that to him. I couldn’t. It would be like admitting weakness, and I couldn’t ever appear weak in front of this man; he’d pounce in an instant, ripping me to shreds. “I have no idea what you’re talking about, and I said you couldn’t ask me a question.”

He pursed his lips, annoyed, but then he leaned forward in the water. His sudden movement caused tiny waves to come my way, and I instinctually pulled back from them. The sensation that we were connected, even though we weren’t, was bad enough without him coming closer. “You didn’t feel that . . . I don’t know . . . that connection? Like it was just the two of us out there? You must have, since you made that crack about me ignoring everyone else and focusing only on you.”

He tilted his head and a water droplet rolled down his cheek and curved around his neck. Watching it made my toes curl. The intimate lighting out here was playing tricks on my senses, making him too appealing. But the mood-setting couldn’t alter his personality, so I focused all of my energy on remembering the fact that he was an asshole who could never seem to get my name right. Plus he raced for a despicable man who would do just about anything to see my father brought down.

“Like I said, I have no idea what you’re talking about.” I indicated the swirling water between us. “I think you’ve been in here too long. Your brain cells are beginning to boil.” I was beginning to boil. I should leave . . .

Hayden smirked, then began sliding through the water toward me. As he cut into the frantic bubbles between us, my heart began shifting into overdrive. I should definitely leave. But Hayden’s gaze was locked on mine, holding me in place. I couldn’t look away. A familiar surge of adrenaline was building inside me, telling me that something incredible was about to happen.

“I don’t believe you.” His voice was low, and his eyes were boring holes all the way through my soul. I unintentionally sucked my lip into my mouth, and his penetrating gaze dropped to study the movement. God, what would his smoldering skin feel like against mine?

His eyes slowly shifted back to mine. “You know exactly what I’m talking about, and you can’t deny that competing against each other, one on one like that, pushed us both.” He stopped right beside me, and our legs touched under the water. His were warm, hard, unyielding, and I had the sudden horrible image of having them wrapped around me. Owning me, claiming me.

“I’ve never raced that well before, and I don’t think you have either. I’ve watched you practicing on the home track a few times, and I’ve noticed something. You worry when you ride, worry about all the people you might be letting down. I get that. But focusing on your fear will only hold you back.” Shock ran through me, temporarily icing the heat. How did he know I constantly stressed about the weight placed on me? And who did he worry about letting down?

Voice soft, he added, “But during the race, I could tell that you let all those expectations go. Because all you were focusing on was me. You raced better when I was out there with you, and I raced better when you were out there with me.” He shifted his position under the water, coming closer until his chest brushed against my arm, and it was like a bolt of electricity struck me. I was tingling all over, ready . . . wanting. How did he know these things? How could he see inside me so accurately?

Hayden’s gaze flicked over my face, alternating between my eyes and my mouth. He looked torn, like he didn’t know what he wanted to do, but then he gently placed his hand on my leg. While his eyes searched for approval or rejection, his fingers began sliding up my inner thigh, igniting me with passion, burning me with desire. My breath was suddenly coming fast and furious. Yes, touch me.

Hayden’s lips parted as he studied my every reaction, and I could see his chest rising and falling as his own breaths quickened. His palm was barely inching across my skin—I was going to explode soon if he didn’t move faster. The glorious anticipation of where his fingers might go was killing me. But then, with a pained look on his face, he stopped moving. Damn it, just do it. Feel me, touch me, take me . . . free me.

With obvious restraint, he slowly leaned forward and pressed his hot lips to my ear, making me shudder. “We’re magic together, Twenty-Two,” he breathed. “Just admit you need me . . . and we can take this up a notch.”

Need him? Take this up a notch? His audacity enraged me. “Get your hand off of me,” I seethed.

Hayden pulled back to study my face for a moment, then he lifted his hand from my thigh and retreated. Raising both hands from the water like he was surrendering, he told me, “Fine. Whatever you say, princess.” He swallowed a few times after he said it, as if he was trying to calm himself down.

Furious at him for going there, furious at myself for not stopping him sooner, I shot up out of the water. The steam lifting from my skin matched my mood, but that was nothing compared to the heat of Hayden’s eyes as he hungrily took in every inch of my dripping-wet body. Enjoy what you see, asshole, because this is the last time you’ll ever see it. Stepping from the tub, I grabbed my robe, tied it tight around my waist, and stormed off.

S. C. Stephens is a bestselling author who enjoys spending every free moment she has creating stories that are packed with emotion and heavy on romance. She has been writing nonstop ever since the release of her debut novel, which received a great deal of praise from the literary world. In addition to writing, Stephens enjoys spending lazy afternoons in the sun reading fabulous novels, loading up her iPod with music to reduce writer s block, heading out to the movies, and spending quality time with her friends and family. 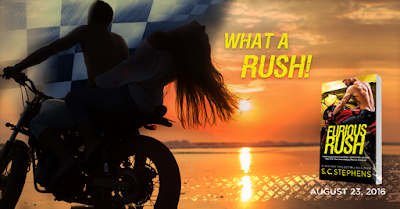 Posted by CrystalBee at 2:16 PM