Pre-Release Blitz: Crazy for You (Starlight Hill #7) by Heatherly Bell 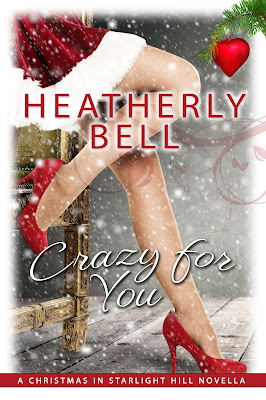 Fallon McQueen needs a date to her ex-husband’s wedding...yesterday. The pickings at the speed dating events she's attended are slim indeed. She needs someone remarkable to impress her ex.

And then she meets...Santa Claus.

Jack Cooper was simply trying to do a good deed and now he has a hot, but batshit crazy blonde asking him to be her date to a destination wedding.

But if Jack is going to help, they're going to do it his way.

Holy Santa Claus! When he lowered his white Santa beard, she got a good look at an easy smile and the light scruff of a sexy dark beard. So what if he was a little chunky around the middle? She could live with that. As he went through her small half of the duplex, opening closet doors, and checking the bathroom, Fallon couldn’t help but check him out. Because this off duty Santa, as Santas went, was sort of five-alarm-fire hot. He took off his hat to reveal a full head of dark wavy hair.

He pulled off his red and white coat and the padding came with it. “Sorry. This is hot.”

Oh boy. Yes, she would have to agree. She’d never in her life, save when she was about seven or so, been so attracted to Santa Claus. But now that the jacket was off she could see a trim, athletic-like physique under there. He’d worn a white t-shirt under the jacket, and as he moved his pecs stretched the material.

“Cleared,” he said and finally turned back to her. “You’re good to go.”

Fallon tried batting her eyelashes. “Thank you so much, officer…officer…”

“Just call me Jack. I’m not a cop anymore. As in permanently off-duty. By choice.”

Get to know the Starlight Hill series!

Heatherly Bell writes humor, heat and heart contemporary romances with sexy Alpha every day heroes. She promises readers love, laughter, and a happily ever after.

When early onset stage fright crushed dreams of Rock and Roll Hall of Fame status, Heatherly tackled writing in 2004. A steady stream of teenagers (hers) and their angst impeded her progress, but she sold her first book in 2013. Now the people and voices that occupy her head refuse to leave. She no longer sings unless you count randomly bursting into song to annoy her children (and the dogs).

Her second passion is crime, and Heatherly maintains she could be a detective and a criminal's worst nightmare. She watches Dateline every Friday night, and has solved many local cases, including the case of the Late Teenager and the case of the Missing Keys (recurring).

She lives in northern California with her family, including two beagles, one who can say 'hello' and the other who can feel a pea through several pillows.