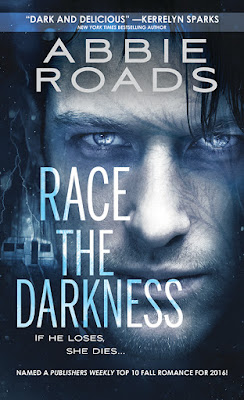 Cursed with a terrible gift...

Criminal investigator Xander Stone doesn’t have to question you—he can hear your thoughts. Scarred by lightning, burdened with a power that gives him no peace, Xander struggles to maintain his sanity against the voice that haunts him day and night—the voice of a woman begging him to save her.

A gift that threatens to engulf them.

Isleen Walker has long since given up hope of escape from the nightmare of captivity and torture that is draining her life, her mind, and her soul. Except…there is the man in her feverish dreams, the strangely beautiful man who beckons her to freedom and wholeness. And when he comes, if he comes, it will take all their combined fury and faith to overcome a madman bent on fulfilling a deadly prophecy.

“Take her. Protect her. Heal her. Save her from Queen.” The malnourished figure crawling on the floor spoke again, urgency riding each of her words.

Save her from Queen. Recognition slammed into him, knocking him to his knees.
…and no one other than Queen will ever remember we existed. Queen—not a typical name.

“Fuck me.” A burr gouged into his heart. The woman lying on the floor was the woman. The one inside his head. She wasn’t a figment of a fucked mind. She was naked and emaciated and—oh, Christ—looked like a corpse.

Guilt choked in his throat—a lump too big to swallow, too awful to taste. She’d tried to tell him she was suffering and needed help. What had he done? Buried her words under a gallon of liquor and a barrel of self-pity. All those nights when he’d felt so restless, if he’d just gotten in his truck, would he have driven here? Found her before it was too late?

The woman’s cheekbones jutted so sharply they nearly cut through the skin. Tufts of blond hair grew in patches along her hairline. And yet, superimposed over what his eyes took in, his mind filled in the gaps, added flesh to her cheeks, fullness to her eyes, and pale-blond hair to her head. Somehow, he saw beyond what lay before him to what might have been. She would’ve been beautiful. Radiant in an angelic way words couldn’t adequately describe.

“Oh, God.” He was the worst sort of asshole. Had always been a selfish bastard, owned that about himself, but this—this was a low he’d never be able to crawl out of. He couldn’t just rationalize away his lack of action all this time.

The spot where his heart should be throbbed. His hand shook like someone coming off the sauce as he reached for her, touching her neck, feeling for a pulse, though he knew there was no way she could be alive.

Her skin nearly froze his fingers. Death did that to a person, stole their warmth along with their life. Her eyelids fluttered, stuttered, and opened, locking directly on him, pinning him with her gaze.

Logical thought tumbled out of his head, splashing onto the floor. His body went into suspended animation mode.

She swallowed, wincing as if the action hurt. “Xander?”

Every word in his vocabulary vanished behind a nearly impenetrable wall of shock and disbelief.

“Is it really you?” Her words were barely a breath of sound. “Or am I dreaming?”

He understood what she was saying, just couldn’t pluck any response out of the emptiness in his mind.

Her face scrunched up, and a soft, dry sob hacked in her throat. “You’re just a dream. Why can’t I just die?”

Seeing her hurting, seeing her pain, finally dissolved his mental paralysis. “Oh, God. I’m here.” He gripped her face in one hand. Her expression relaxed as if his touch eased her. “I’m real. You’re safe.” He swiped his thumb over her chin, felt it tremble at his touch.

Sorrow faded from her eyes, but other emotions filled the void—more emotions than he knew what to do with. He didn’t need to be Freud to see the adoration and the hero worship. “Don’t look at me like that. I’m not the good guy here.” His tone was overflowing with self-loathing and guilt for not finding her years ago. “You know my name, but I don’t know yours.”

“Isleen.” One side of her mouth twitched like she was trying to smile. “You’re real. You’re really real.” The smile faded. “Where’s Gran? You have to save Gran too.”

Her eyes closed, her chest popped up and down in exaggerated breaths too unnatural to be normal. He yanked his cell phone from his pocket.

“The last road I remember is County Road 95. A trailer in the middle of cornfields. I just found two women being held against their will. They both need an ambulance.”

The growl of his truck’s engine grabbed Xander’s attention. The Crazy One—he’d forgotten about her—had stolen his truck. This day was full of happy damned surprises. The sound of his truck faded and got further away, but then the direction changed and the roar of pedal-to-the-metal screamed at him. What was she doing? Even as the question flittered through his consciousness, the answer came to him. His truck was about to meet the trailer.

He dropped the phone and grabbed Isleen.

By day, Abbie Roads is a mental health professional known for her blunt, honest style of therapy. By night she writes dark emotional novels, always giving her characters the happy ending she wishes for all her clients. Her novels have been finalists in RWA contests, including the Golden Heart. She lives with her family in Marion, OH. 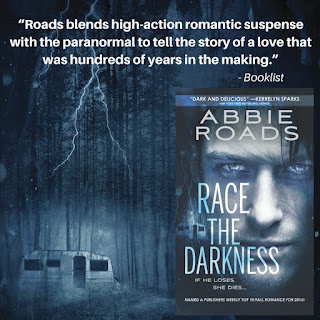