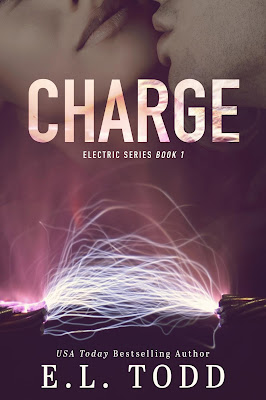 That's exactly what Volt is.

The first time I met him, my body reacted. It coiled, sizzled, and sparked. I knew I wanted him because he was the first man to make me feel dead and alive at the exact same time.

But within a short conversation, I knew he was unattainable.

But will we stay friends?

Somehow, without even realizing it, Taylor became my friend.

When I first met her, I thought she was some awkward woman, and then I got to know her better and I wanted to have a one-night stand. But then she told me off and demanded the respect I didn’t give her.

And boom! We were friends.

I’d never had a friend that was a girl. There was always sex involved, and if sex couldn’t be had, there were some decent hand jobs. Natalie and I were friends, in a way. But I viewed her as Derek’s sister most of the time.

After I got off work, I was walking to my apartment when Taylor texted me.

She usually sent me these cryptic text messages, and it was my job to figure out what she was trying to say. Now?

She sent an emoji of a blueberry muffin.

That wasn’t too complicated to decipher. On the way.

She sent me a picture she took of herself. She was shoving the entire muffin into her mouth like a snake that was swallowing a mouse whole.

I chuckled and typed a reply. Damn, that’s sexy.

Then she sent me an emoji of a hand flipping me off.

I laughed then shoved my phone into my pocket. I walked to the bakery and spotted her sitting outside at one of the picnic tables. She wore a long pink dress with a purple cardigan over it, her usual classroom attire. She looked like a stereotypical schoolteacher, classy but also a little nerdy. Her long brown hair was in curls and she wore a large sun hat to keep the sun out of her eyes. She looked like she belonged at the beach—minus the cardigan. “When you start a dating profile, you should make that picture as your profile picture.”

“No one is going to be interested in you anyway.”

She gave me a playful kick under the table.

“What’s this?” I spotted the coffee and muffin on my side of the table.

“I figured you didn’t want to wait in line.”

“But how did you know I would come?”

She shrugged. “You don’t have any friends besides me so what else would you be doing?”

She made me smile bigger when I didn’t think it was possible. “Touché.”

USA Today Bestselling Author, E. L. Todd is one of the most prolific authors of her genre, having published over a hundred novels. With over one million copies sold, she writes romance stories ranging from contemporary romance, new adult romance, and fantasy romance. She’s best known for her Forever and Always Series as well as her Timeless Series.

She loves coffee, ice cream, and anything with sugar.